Note: This is a re-upload from my former freewebs site, but I have gone through and edited it in some areas, primarily to check for grammar and spelling blunders. 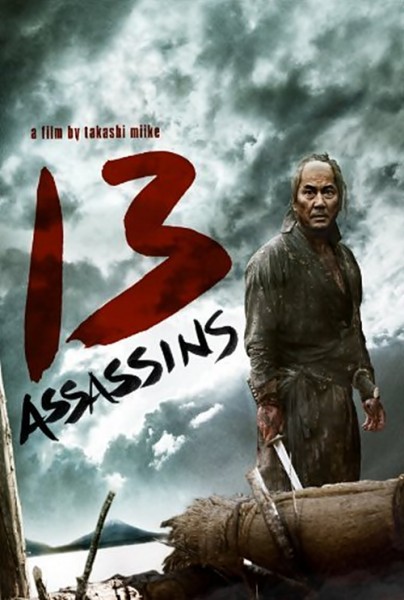 Plot: Lord Naritsugu Matsudaira (Goro Inagaki) abuses his power by raping and murdering anyone beneath him whenever he feels like it, but no one can do anything about it as he is the Shogun’s brother. Enter Shimada (Koji Yakusho), a grizzled, older samurai who decides to take out this vile Lord. He recruits 12 other warriors to aid him, but they’ll have to get through an army before they can reach their target. Do they even stand a chance?

“13 Assassins” was a movie I could fully get behind. Obviously, I love samurai films, especially ones that are action packed (because despite what people think, samurai films are usually NOT action films). But perhaps even more importantly, I love Takashi Miike, who is my favorite director of all time. His movies, whether they work or not, are almost always unique, bizarre and fascinating. He’s the only director whose films I will watch regardless of genre. Yes, I will even eagerly anticipate a romance if it is done by Miike. But while usually emphasizing his weird style, Miike’s films also happen to have heart. I generally care about his characters and their conflicts. This means he can do comedy, horror, action, romance, gangster dramas or coming of age stories and I will most likely enjoy them. Miike’s…Miikeness(?)…has occasionally backfired though. “Izo” somehow turned a film thats 90% action (and 75% of that is samurai action) into a slow paced and frustrating snoozefest. “Visitor Q” contains everything that I want from Takashi Miike and yet somehow earned a rare zero star rating from me. Yet I do believe that genius can alienate just as much as it can enthrall, so I’m more than willing to forgive the occasional misfire. But then something happened…

Takashi Miike suddenly became a mainstream filmmaker, commanding heftier budgets and focusing on content accessible to the masses. He did all of this reasonably well, but it seemed like those cool Miike touches were gone. Films like “Yaberman“, “Sukiyaki Western Django“, “Yakuza, Like a Dragon” and “The Great Yokai War” felt like they could’ve been directed by anyone.”Perhaps like so many other filmmakers, his creativity had been drained. Perhaps he was tired of trying to ‘shock’ viewers so much. Perhaps it was because his “Masters of Horror” segment was too extreme to be aired and this made him re-evaluate his career. Perhaps he just sold out. Regardless, it seemed to me that Miike was out of his element. He would be much more comfortable helming smaller, more daring projects. Although part of me hoped that he could maybe find some sort of middle ground…and he did…”13 Assassins” is a samurai themed actioner designed to appeal to anyone who appreciates bloody sword play, but it’s demented and unusual enough to be a true Takashi Miike movie.

I was shocked at how normal “13 Assassins” was. There is no surrealism, no necrophilia or sleazy rape (thank God) and even the films haunting haunting imagery is kept in the realms of reality. Instead, Miike opts for an epic, old school samurai opus. We have a great cast, who get quite a bit to do on an acting level. The (incredibily well written) dialogue, the costumes, the sets and even the warriors laughs all reminded me of the good ole samurai films of Kurosawa among others. But Miike doesn’t forsake his usual touches. Before I continue, I guess I should explain a bit more what Miike’s style is. Miike’s films are filled to the brim with outrageous situations, surreal narratives and taboo breaking plot divices. Miike has the tendency to horrify his viewers with the macabre, even if the project doesn’t belong in the horror genre. But once again, it provides a nice contrast with genuinelly touching drama. At the core of his almost sadistic films, there are heavy and moving emotions. With “13 Assassins“, Miike is restrained, but these elements are still there. I got my Miike fixation, while if his detractors despise “13 Assassins“, it won’t be for their usual reasons.

When showcasing how horrific Naritsugu is, Miike does a great job at freaking us out. The most startling scene in the whole movie is when we see a peasant girl whose limbs have been amputated, so that she could be used as a sex toy. When we see her, it’s an image one would expect from a horror film. Her malnutritioned body, her missing limbs, her wailing and the fact she seems to be bleeding teers(!!) creates a horrifying sense of dread. It’s amplified by the moody lighting and the fact that Miike is being surprisingly clinical with the scene. Miike’s worst weakness is his tendency to eroticize sexual deviancy. Like Ruggero Deodato, Miike doesn’t seem to know if he thinks rape should be horrific or arousing. Sometimes Miike feels the need to shoehorn pointless crap like that in stories which do not need said pointless crap. I mean, “Dead or Alive 2: Birds” is great, but they have a randomely spliced in scene where some thugs are raping a dead woman. Why? “13 Assassins” has the dismembered peasant woman and an off screen rape scene, but it’s never sexy. It is uncomfortable, horrifying and disgusting and serves to show how much of a monster our villain is. Many thought that this film was immensely violent and to a point I agree. There are a few Miike-ish scenes, such as a character exploding which is followed up by his blood raining throughout the battle field. But for the most part, Miike continues to restrain himself when it comes to the gore. Most of the violence relies on ‘sound’. We hear people disembowling themselves, being cut into pieces, etc. It makes the film more cringle inducing for it. I’m going to return to the Miike-touches later on and make a point how they helped the film in the end. For now, let’s just talk about the movie on its own.

There is very little action for the first hour of the film. For the most part, it’s the characters preparing to pull off their plan. They often talk in whispers, and Miike uses this to great effect, creating an atmosphere of paranoia. Could someone be listening in on them? That thought kept the dialogue oriented sequences intense. Some might find it boring, but I didn’t. The actors are great and the dialogue captures the samurai spirit wonderfully. Miike has a unique visual style going on. Many scenes are moodily lit, emphasising a mysterious quietness that was often chilling. Other scenes are vast and epic, with plenty of long shots of gorgeous locations. It’s a pretty cool contrast and Miike even manages to establish a few memorable visuals, such as the assassins standing on the buildings. Awesome! It’s top notch direction in general, but as I said, you can definitely tell it’s Miike behind the lens.

Then the action begins and it never stops. The assassins trapping the samurai in the village provided many fully explored opportunities for insane stuntwork. Admittedly the technology used by our heroes is pretty anachronistic, but it made for some riveting sequences anyway. The camerawork and editing is sharp and focused, never allowing the action to become incomprehensible. The sword choreography is fluid and natural and the gimmicks surrounding them add to the tension. I have to imagine that the locations and situations surrounding these battles were incredibly difficult to film. I like how the final battle between Shimada and Hanbei (Masachika Ichimura) takes place in the mud. I’m sure there was a lot of slipping behind the scenes. The sounds of the clanging swords gives the battles an authentic air about them too. But what makes all of this action so spectacular is that you can see the characters becoming more and more exhausted. We begin to feel their fatigue. That draws us into the battle with them, so we feel what they feel and that is a difficult feat to accomplish. 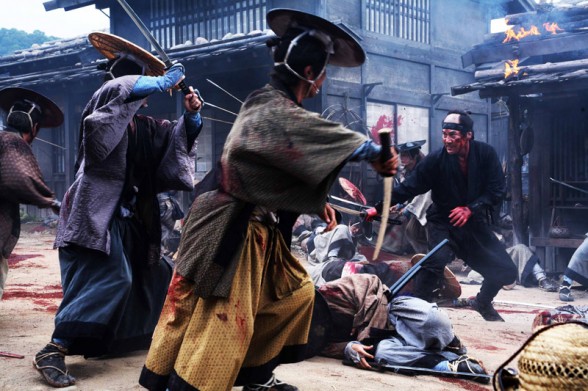 Are there any problems? The films only real weakness is its lack of character development. Actually no, it’s that I had difficulty telling most of these guys apart. While a few do stand out, most of the characters are merely props for the fight scenes. This puts “13 Assassins” below Kurosawa’s “The Seven Samurai“, which fleshed everyone out magnificently. With that said, I cared for them all as a group and I’ve heard that there were a few deleted scenes which took away from their development as individuals. It’s not a major issue, but it does keep the movie from being perfect. Hell, maybe if more time was spent on the characters, it would’ve killed the pacing. You never know…”13 Assassins” is an epic of epics. It’s a wonderfully crafted samurai film with all the traits we’ve come to love about this genre, but it also concludes with a spectacular 45 minute finale which showcases some of the coolest samurai battles ever filmed. It makes me really want to see the original “Thirteen Assassins“, which also apparently packed a heavy punch during its 3rd act. Yet Miike’s own twisted touches benefit the film because they give “13 Assassins” a more distinct personality. His touches, from the poor amputated woman to the crazy finale to a bizarre revelation concerning the last assassin elevate the film from a geat samurai epic to a memorably great samurai epic. I’ve grown to stress that films need personality, and without Miike’s involvement, the film might’ve lacked that.

Violence: Rated R worthy. It’s very violent, but the sounds make it seem more graphic than it really is.

Nudity: There is nudity during the scene with the amputation woman, but it’s not pleasant. There’s also a full frontal shot of a young boy peeing (um, seriously?), also not pleasant. Finally, there’s an offscreen rape too.

Overall: “13 Assassins” is a must see for all samurai and/or Takashi Miike fans and even if you’re not a fan, you’d likely appreciate it.