Since this follows on directly after Iron Man 2 I figured it made sense to get it out the way now.  I don’t mean that in an “it sucks” way, but…  Umm…  Well while it’s not a bad film, it falls short of what it could’ve been.

Consider it an origin story for the character, it introduces Thor & the universe he inhabits then ends making you wonder when the sequel will be arriving.  And well…  I’ll get to that later. 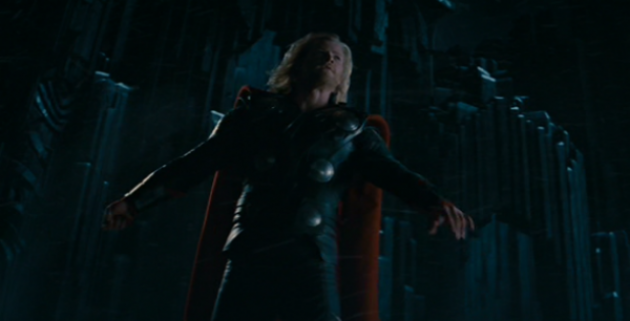 The films starts by doing that annoying thing where the first scene is actually something that happens later in the film – almost half an hour later.  It’s not a big deal, but it seems pointless.  You have no idea what the people are doing in the middle of a desert at night, they head towards an anomaly in the sky & hit a man – obviously that’s Thor.  Then the film decides to provide us some exposition combined with eye candy, or as I like to call it: cheap looking CG.  Coming from Iron Man the first impressions brought by the CG cityscape isn’t a good one, already looking dated, or at best like a game.  It’s a shame because the costumes look great, as do the real sets.

I best get onto the cast before I write an essay on the visuals.  Chris Hemsworth is Thor, and I honestly had to look to see what else he’d been in; I was quite surprised to see he was in A Perfect Getaway, which I’ve watched several times & never would’ve known without looking for the name.  Natalie Portman gives us a love interest for him, as well as getting a lot of screen time & having one of the better developed characters.  Tom Hiddleston provides an interesting performance as Loki, and was also an actor I had to search for to see where else I may have seen him.  Surprisingly he wasn’t credited in the DVD’s synopsis which seems odd providing he’s one of the main characters, whereas Anthony Hopkins is on there despite having comparatively little screen time.  Just goes to show how star power can usurp lead actors.

So the plot, well as I already said it’s pretty much an origin story which alone wouldn’t be a problem, but take a look at the release schedule.  Thor 2 isn’t going to arrive until after The Avengers, so we’re going from an origin story straight to the main course.  If it had been the other way around I wouldn’t be so irritated, at least then the character would have had the time to be developed fully.  Instead we’re given a cop out for how he’s inducted by S.H.I.E.L.D. and an ending which needed a sequel to bridge the now gaping hole between this film and The Avengers.  If you’ve already seen Thor you’ll know what I mean.

I already stated when writing about Iron Man that I’m not a comic or Marvel nerd, but even I feel like the character hasn’t been given the same respect others have – excluding Captain America which I will get to soon.

Back to the visuals, which are so mixed it’s ridiculous.  The scenes on Earth aren’t too bad, nothing I’d call great, but they’re passable.  Everywhere else is just a mess, real sets for the other realms are few and far between, the rest is all green screens & CG and it looks terrible.  You know, when the actors look like they’ve been pasted onto an image, it’s like that.  The green screening is extremely obvious on Thor especially.  The CG backdrops & cities, although detailed, look like they belong in an average game – not a multi million dollar movie.

However despite all the ranting I actually enjoyed the film for what it is, it’s not the worst lead up to The Avengers we’ve been subjected to which garners it some forgiveness.  I still feel somewhat cheated though, there should’ve been a sequel before plunging the characters into something bigger – Iron Man & The Hulk both got treated with respect & gave people unfamiliar with them the chance to learn what they were all about.

Wait until this one’s in the bargain bins unless you’re a Marvel fan, it just isn’t as good as it could have been, and without the cast providing an entertaining performance it would’ve been an abject fail.

Thor can now be found in bargain bins, I knew it wouldn’t be long.