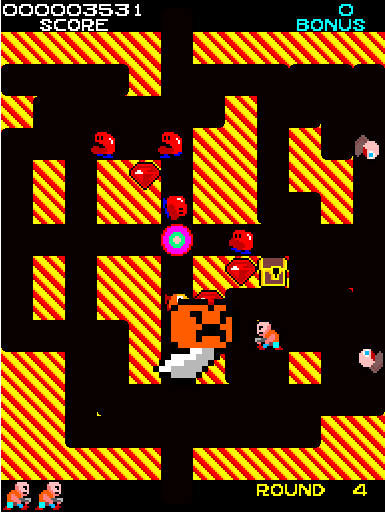 On occasion I get the urge to make stuff, and then I get distracted leaving yet another half finished project to rot.  GEMGET! Was almost one of them, well actually for a while it was.  I originally started making it around 6 months ago, but rather than getting bored I hit the point where art is needed, and for me that’s a bit of a brick wall.  I can do the art stuff, just I don’t really enjoy it – not to mention being overly critical of my own work resulting in repeated remakes of the same sprites over & over again…

None the less this is one I came back to & finished, followed by torturing people into play testing for me.  It was worth it though, as people seem to like it.

I could describe the game, but others have done it better:

OWVIDEOGAMES
GEMGET! is absolutely nothing other than a time-warp back to the arcades of yesteryear. Your objective couldn’t possibly be any simpler: Get the gems, get a highscore, feel good!

Your job is made more awkward by the bad guys who run around the underground and will follow you through any tunnels you happen to connect to theirs. Fortunately, if they get too close, it will take only a single shot from your blaster to send them packing – destroy enough of them and you the treasure chests will open. The faster you collect all gems on the level, the higher your time bonus will be. What score can you manage?

There may be a few inaccuracies in their descriptions, but figuring it out is half the fun.

Anyway, I’ve decided it’s time to fire it on here at last, seemed logical since it’s had the site’s address on it’s loader since release.  Be aware it’s retro – as in 80’s arcade retro, and from what I’ve been told it’s pretty hard too lol.  I’ve also been told the music’s pretty cool, and after being asked for it several times I figured I’d just stick a download for it.  Feel free to use it for whatever, they’re just public domain tracks I chiptuned.