Dead Space was a fantastic game, and the first that in my opinion, managed to make you feel alone.  However they left you wondering what exactly happened before you arrived.  Prior to Dead Space: Extraction’s release you had a choice – either read what was on the net, or pick up this film.  Personally, I wasn’t into the idea of fan made wikis especially that early in the game’s life, so I went the route of getting the film.  I loved the game, and when adverts started appearing for an anime that would provide more insight to the back story I jumped on it.  They made a smart move by releasing the pair so close together – Downfall actually being released a few days before the game in the UK.  Bit of a release fail, but it had the upside that you could pick up both at the same time.

Lets talk plot, it’s the prequel to the first game.  An artefact (the Marker) is discovered on a planet, it’s brought upon the Ishimura & the Unitologists being the religious nuts they are see it as something to be worshipped.  Of course as expected this results in things going wrong.  Initially people going mad & suicide rates increase on the mining colony, eventually resulting in our friends the Necromorphs taking over the ship killing everyone in the process.  If you’ve played the game then you know how things pan out in the long run.  In short – everyone dies.

To be honest I’m not sure if I didn’t pay a lot of attention to the blurb in the game (hard to pay attention when you were watching out for things jumping out at you) but I don’t remember there being much fleshing out of the Unitologists.  Thankfully the film fills in most the blanks.  I could make a Scientology joke, but that would be far too easy.  Basically they believe man was created by aliens & that after death they’ll be reunited. Of course they’re the reason it all goes tits up, due to beliefs that the artefact should be brought back to Earth and refusal to give it up due to [insert silly religious reasons here].  It’s a reoccurring theme, and the distrust between the Unitologists & other people is played upon throughout.

The Necromorphs themselves don’t look much like they do ingame, not only because it’s animated, but also because it’s early days for them.  They still resemble humans that have been changed, and it’s a pretty nice touch.  Don’t expect any Tentacles, Exploders or Wheezers etc, they don’t use a lot of the creatures that were in the game, something that I’m also putting down to it being early days for them. 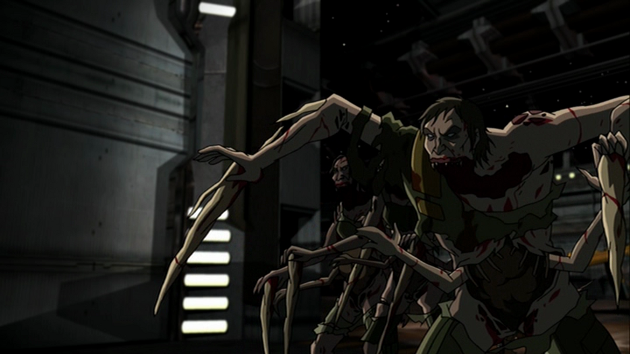 As an anime it should have a heavy emphasis on art & sound, and this is where it isn’t so great.  The art isn’t bad, it’s good I guess, but not as good as you can find in other films & shows.  At times the animation is quite ropey & it can look incredibly flat.  The voice acting isn’t too hot either.  When I hear “No no no, Jen, oh baby oh fuck why” after a dude watches his wife kill herself I’d expect…  Um…  Emotion perhaps?  And why so much profanity?  There’s a lot of ‘why did they say that?’ moments.  I have no issue with swearing, but context people, context.  It picks up with the background music, which is pretty great – so great it’s rare you notice it.  That might seem like an odd way of thinking, but for me when the music fits so perfectly that it blends in like this it’s been done right.  The plot is the high point though, and it does it quite well.  However all in all this is far from being a great example of the medium.  That’s not to say it sucks, it’s slightly above average, and if it wasn’t for the tie in to the game I honestly wouldn’t have bothered with it. 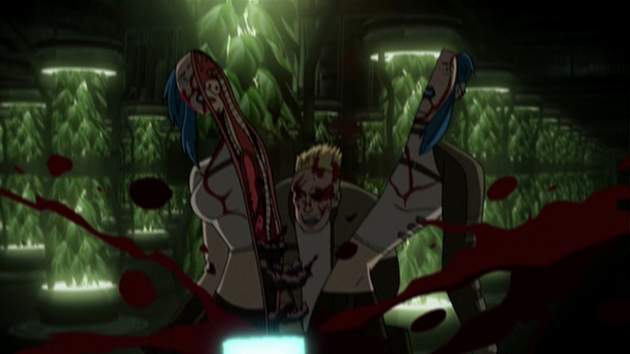 Is it true to the franchise?  Hell yeah, it’s a given since it was made with the purpose of filling in the back story.  It would be wrong to say this is the correct way to do a game to film adaptation, but in this case it was the right thing to do – recreating the game just wouldn’t have worked.  The film ends bang on at the start of the game, there’s no between time thus creating a seamless plot extension.

Should people who liked the game watch it?  Well I’d say it depends on how much you like it, if you really want to know what happened prior then sure.  It’s pretty short, clocking in at just over an hour, with a whole 4 minutes of special features advertised on the box.  Wow 4 whole minutes!  Despite being relatively short it feel longer than it is, and you don’t even have to wait half the film for things to get into full swing.  Once that happens the blood & profanity goes into over drive.  It’s not perfect by any means, but it’s the best way to get the plot vs the time required.  Yes you could read it, but by the time you’ve read through all the various articles about each thing featured you’d have eaten several hours.

If you’re not into the games then don’t bother, as a stand alone it just don’t hold up.  Sure it is a much quicker way of getting the back story then playing through Dead Space: Extraction – and unless you have a Wii or PlayStation 3 it’s the only way to experience the events.  Outside filling in the blanks it’s just another meh anime.  My GF at the time was bored by the film, and although she did enjoy watching the game she wasn’t a fan of it by any means.  I think that gives a good example of why it fails outside the fan sphere.

I’m going to red flag one thing on this – the damned layer change on the disk is right in the middle of an action scene, something my Sony player was all too happy to let me know about with a 2 second pause while it happened.  Is placing the switch in a place between scenes too much to ask for? 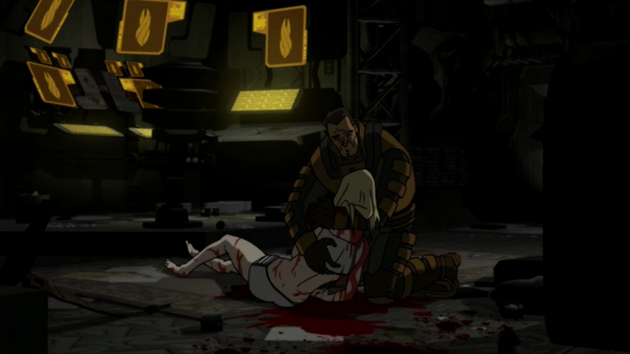 So lets gather all those scores.

It’s not terrible, and fans of the game will likely enjoy it.  Beyond that it isn’t really worth the time regardless of how short it is.

Next up – Dead Space: Aftermath…