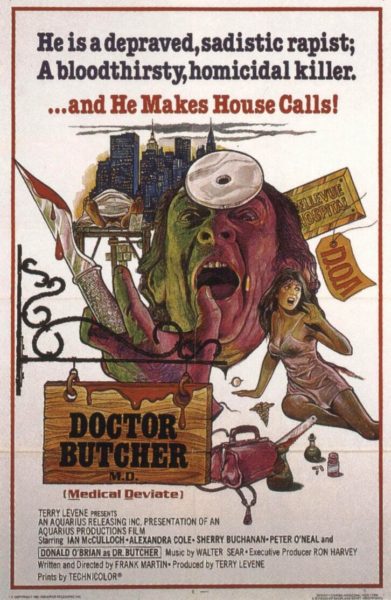 Plot: A scientist leads an expedition to an island dominated by cannibals In order to investigate a case of stolen organs. What they find on the island, however, is far worse than any mere case of cannibals. Also known as “Doctor Butcher, M.D.“.

“Zombie Holocaust” boasts one of those concepts that sounds brilliant, until you actually start thinking about it…Then you not only realize how stupid it truly is, but you also come to the conclusion that you are equally stupid for momentarily liking it…And then you continue to like it anyway, because…’Cannibals Vs Zombies‘…CANNIBALS VS F@CKING ZOMBIES!!! Sure, zombies are already kind of cannibalistic, making the concept somewhat redundant, but…CANNIBALS VS ZOMBIES! This is a concept that could’ve only been conceived in Italy during the late 1970’s, early 1980’s, as horror trends were favoring zombie and Amazon Cannibal flicks, thanks to the successes of “Zombie” and “Cannibal Holocaust”…so why wouldn’t they fuse the names together? Technically, “Emanuelle and the Last Cannibals” served as the real inspiration, as “Cannibal Holocaust” had only come out a few months prior, but they deal with the same subject matter and they chose to call it “Zombie Holocaust“, not “Zombie and the Last Cannibals“. Unfortunately, as awesome as a marriage between “Zombie” and “Cannibal Holocaust” sounds, the final result was more akin to a one night stand between “Zombie 4” and “Cannibal Ferox“…A movie called “Zombie Holocaust” should not be this dull…But what are you going to do? Refer to it by its other title, “Dr. Butcher, M.D“? That’s about as boring as the movie itself!

When limbs and organs are being stolen from various hospitals in New York City, it’s up to Dr. Chandler (Ian McCulloch) and a Doctor/Anthropologist named Lori (Alexandra Delli Colli) to head an expedition on a small island in the East Indies in order to solve this mystery. Once there, their group is assaulted by vicious cannibals and they realize that something more sinister is happening on the island. Because even the Cannibals are afraid of…ZOMBIES! There are certain…rules…a viewer needs to abide by if they wish to potentially enjoy an Italian splatter flick, the first being that scripts are a figment of your imagination. These movies often make no sense, because the stories only exist to give an excuse for disposable characters to get to the chosen location, so that they may get naked and eaten. All ye who enter “Zombie Holocaust“, abandon all logic, for you’re not supposed to question why two scientists would go to a dangerous, Cannibalistic island to investigate vanishing body parts…and they never really explain why someone is stealing the body parts anyway! If it feels like these so-called ‘scripts’ were being written on the same day of the shoot, it’s because they often were. The second rule is that even though actors were hired for these projects, they are not playing characters as much as they’re playing props…who exist to either get naked or be devoured. You might find this strange, as these flicks often scored some surprisingly talented performers to play these bags of entrails and blood, giving the film a little class. Ian McCulloch might not have anything to do, but he is a good actor who elevated the thin material he had to work with. Even stranger is the highly uneven dubbing, creating the perfect mix of terrible and stellar, which is to always be expected from Spaghetti Horror.

Rule #3: The direction is always unpredictable, as one scene will have lazy composition and framing, but the next will boast an artistry that almost doesn’t belong here. “Zombie Holocaust” in particular looks about as low budgeted as it was, even resorting to using stock footage from “Zombie“. The sets are cheap and the visuals lack any sense of atmosphere or depth, but aesthetically, this isn’t the worst of its kind. Sometimes the cinematographer, director and editor would concoct an effective scene and at least “Zombie Holocaust” isn’t the most boring of its kind… Where the bulk of Italian Splatter films succeed though is with the gore effects, which are almost always going to be shockingly disgusting. Sometimes they’re hilariously cheesy, but other times they’re chillingly realistic and “Zombie Holocaust” played this card well. I would argue that the strength of your stomach is the most important part of determining whether or not these kinds of films are for you, even moreso than the shoddy quality. If you don’t like graphic violence, then you will hate this, as it’s part of a subgenre that spawned some of the nastiest flicks to ever hit the market. “Zombie Holocaust” might not be as grotesque as the films its emulating, but it is trashy, exploitative and gruesome. What is up with the zombie makeup though? The Italians are usually pretty good with the makeup effects, but these prosthetics look atrocious. These might be the worst zombies to ever come out of Italy…although I say that with reluctance because I’m sure there are plenty that I have been fortunate enough to avoid. Even though this review might seem somewhat snarky and hostile, I actually don’t mind “Zombie Holocaust“, primarily because it achieves the bare minimum of my expectations for a genre that I enjoy. I am disappointed, but only because 75% of this movie plays out like a conventional- but underwhelming- Amazon Cannibal flick, with the zombies waiting until the finale before showing up. I was hoping to see more zombie interactions and as much as I hate to say it, the title is to blame here. But then again, the title is the only reason I bothered watching it, because why would I watch something called “Doctor Butcher, M.D“?

Nudity: There is a fair amount of it.

Overall: “Zombie Holocaust” is only for die-hard fans of Italian splatter, but said fans should find it serviceable enough.