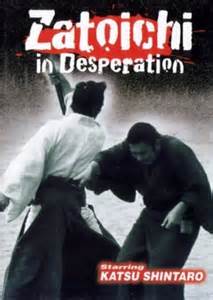 Plot: Blind, wandering swordsman Ichi accidentally causes the death of an old woman, so decides to rescue her troubled daughter from a life of prostitution. This leads to an inevitable clash with Yakuza, but these guys are significantly more vicious than what Ichi is used to dealing with. Has he met his match?

“Zatoichi in Desperation” has given me a headache because I can’t seem to decide whether this is one of the worst Zatoichi movies or whether it deserves a big wet kiss for doing something different. The Zatoichi franchise has had a more respectable legacy than…let’s say Godzilla, because the filmmakers and studios relied on quality to keep the general audiences interested, not just a namesake that could be exploited. This is especially impressive when you consider the TV show as well, which boasted similar production values and even though there were some misguided experiments which kept Zatoichi’s small screen exploits from reaching perfection, I never felt the blind swordsman’s name was ever tarnished. Yet I’d still place Zatoichi below the James Bond franchise primarily because the majority of Zatoichi movies resemble…well, other Zatoichi movies. The stories, sets, characters, visual styles and plots were all a bit too repetitive. I can remember “The Man with the Golden Gun“- often regarded as the worst Bond film- but can I remember “Zatoichi Meets the Doomed Man“? No, but according to my 3-star rating, I must’ve liked it more. So at least “Zatoichi in Desperation” stands out. The problem is that many of its more memorable attributes also tended to piss me of, which complicates my feelings. Ugh, what do I think? I DON’T KNOW!

“Zatoichi in Desperation” is dark…and I’m not referring to the tone either…although yes, the tone is certainly dark too. I’m primarily referring to the lighting, which is very dim and it sometimes is difficult to tell what is happening. It doesn’t help that the camera work is very trippy. There are some really cool visuals, but other times the camera moves around in a way that blurs the image and that teams up with the murky lighting to thoroughly disorient the viewers. The editing can also be quite choppy and bizarre as well, making it difficult to tell ‘what in the f@ck just happened?’. Did he stab the guy? Or did he miss? Yet I also have to concede that the editing and sound design provide some very haunting moments, such as the opening bridge sequence. In fact, I thought the exterior scenes were generally impressive thanks to some inspired and chilling imagery. It’s just when the scene is taking place inside a home, probably in the night, that it becomes difficult to see what is going on- and that consumes what feels like the majority of the screen-time. “Zatoichi in Desperation” is also the sexiest of the Zatoichi movie, or at least it’s trying to be. There are a lot of love scenes and whereas most Zatoichi movies (or Chambara flicks in general) would cut away as soon as it was established that love making was about to take place, this one lingers awkwardly for awhile. I’m pretty sure the actors need to get a restraining order against the camera, because it was practically molesting them as they got it on. I’ve always found sex in Japanese Cinema (at least through the 70’s) to be incredibly weird looking. The characters just grab and rub each-other so passionately that it looks phony, as if neither of them want to do it. That obviously was not the intent, as it’s just how sex scenes were done back then, but they look silly now. I usually wouldn’t bother complaining, but “Zatoichi in Desperation” has enough sex to fill up the previous 23 Zatoichi movies. So because I didn’t find any of the sex to be sexy, I started to get annoyed with Shintaro Katsu’s obsession with it. Oh yeah, did I mention he’s the director? I’ve noticed that whenever he produces or directs a movie, there’s a lot of risqué material…and that’s just when he’s being tame. At least the sex here isn’t rapey, making it a little more tasteful than his “Hanzo the Razor” trilogy…although there is a scene where a gangster forcefully jerks off a retarded dude who wants to have sex with a doll…Yeah…That’s going to stay with me for awhile…

I’ve noticed that whenever Shintaro Katsu sits in the directors chair, he has this tendency to become very self indulgent. There is going to be a lot of artsy padding with shots that are either symbolic or just unnecessary. There will be way too many subplots, with a large chunk of them having nothing to do with Ichi or the primary story. You have the deal surrounding Ichi trying to rescue a girl from prostitution, clashing with the Yakuza. But there’s also a storythread involving the Yakuza terrorizing the local fisherman, another prostitute interacting with her young brother, the boyfriend of the girl Ichi is trying to rescue, a warrior Ichi will face off against, more Yakuza who hold a grudge against Ichi and ANOTHER Yakuza boss who wants Ichi’s head. I don’t even think Ichi encounters the Prostitute with the brother, so why was that even there? I suppose the answer is that Shintaro Katsu was more interested in the world surrounding Ichi than Ichi himself. I still felt he could’ve gotten the point across by streamlining the plot, but I think the real answer is that Katsu was a filmmaker who lacked focus. He did the same thing with “Zatoiichi (1989)“, where there was also way too much padding and unnecessary storylines. Yet I do believe there will be some viewers who will like his non-linear approach. I have to admit that even though I wish they had a firmer connection, the majority of the subplots did move me. The bit with the prostitute and her brother- the most unnecessary thread- did leave an emotional impression on me. Shintaro Katsu does give his actors more room to act than most Zatoichi directors do, but he also tends to waste interesting characters who deserve more screen-time. There needed to be a stronger villain, which is strange because Ichi’s enemies actually DO get the better of him quite often. But outside of their collective group, I can’t remember any of their names, faces or personality traits outside of them being evil. So even though the performances were good, the characters could’ve been utilized more effectively.

But I definitely have to concede that “Zatoichi in Desperation” is one of the bleaker entries. “Adventures of Zatoichi” showed us that sometimes Zatoichi can’t save the day. In “Zatoichi in Desperation” though, his altruistic actions tend to make things WORSE. This makes all of the events- whether they’re necessary or not- seem much more tragic. There are a lot of elements that you don’t see very often, like kids being beaten to death, an enemy apparently dying by a roof falling on his head (did Ichi do that intentionally?) and Ichi receiving a second handicap (!!). The supporting characters sometimes have unique dilemmas, like how the girl Ichi is trying to save doesn’t really want to be saved. Yet Shintaro Katsu also forces down many of the clichés with such a stiffness that it contradicts the uniqueness of “Zatoichi in Desperation“. For example, Ichi will have to cross swords with a dangerous warrior and their fight is pretty epic. In fact, the action in general is really good when you can see it…or when it happens. There is enough swordplay, but “Zatoichi In desperation” isn’t action packed. This rival only seems to be there because there has to be a rival. There’s nothing different about this rival other than the fact that his subplot is resolved before the third act comes around. Considering how much time was spent on building up this character, you’d think their clash would be a bigger deal. Shintaro Katsu also directed “Zatoichi (1989)“, which also discarded the rival character in an unsatisfying manner, so maybe there is a point to be found here. But it just felt like Katsu was following guidelines in a movie that didn’t really a need any. So “Zatoichi in Desperation” offers a lot of new and different material, but it also forces in a lot of familiar elements that just weren’t needed.

So now we return to my original dilemma: Did I like “Zatoichi in Desperation” or not? I’ve come to the conclusion that I do, albeit with some serious reservations. While there are quite a few clichés, they tend to be treated as afterthoughts in order to complete the formula. Shintaro Katsu was obviously more interested in material we hadn’t seen before…and sex…Above everything, I think I will remember the movie long after I’ve even begun to forget Zatoichi’s more amicable adventures, because it is different. But I also have to admit that the padding- whether it be gratuitous arthouse shots or the even more gratuitous love scenes- bogged down the pacing and I was occasionally bored. The plot is a mess, not because there is so much going on, but because much of what is going on doesn’t tie into our protagonist. That, to me, is sloppy writing unless there is a concrete point to be made. If they spent less time on the unnecessary stuff and more time on the important stuff, character decisions would make more sense. There is an implied suicide, but that action didn’t really fit with that character, so either the character was underdeveloped or the resolution to that story was forced where it didn’t belong. On a technical level, Shintaro Katsu is trying to be artsy with mixed success. I didn’t always agree with the lighting, cinematography or editing, but I saw it more as experimental than bad. You might think it adds a lot and I was often just as much impressed as I was annoyed! Yet I’ll likely forget the majority of my complaints over time and just remember the bleak tone, Ichi getting his hands mauled, the death by rooftop and the many other unique things which were pretty cool. I don’t really want to watch “Zatoichi in Desperation” again, but I’m glad I watched it at least once.

Nudity: None, but there is more sex than usual.

Overall: “Zatoichi in Desperation” is an interesting experiment that you will either like or dislike, but I think it’s worth watching at least once. But if you’re a Zatoichi fan (like me), you’ve probably seen it by now. Start at the beginning, because the original film is arguably the best and determine whether or not this franchise is for you based on that.