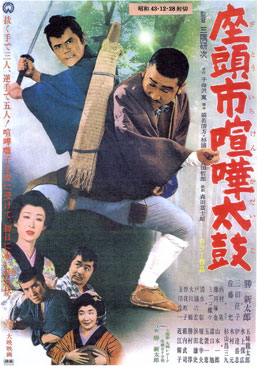 “Samaritan Zatoichi” was the 19th entry within this long running franchise and…wow, that is difficult to comprehend as of 2014. These days, it’s rare for a filmmaker to push past two sequels because audiences have short attention spans…and because the quality is chipped away as it becomes more apparent that the filmmakers are more interested in making money than producing an exceptional films. Yet typing this actually amuses me because in a way, the Zatoichi series desperately recycles the same formula to an even more gratuitous extent than any modern franchise would- almost always re-using similar plots, characters, aesthetics, situations, etc. But despite the fact that I can no longer tell which Zatoichi movie is which, I never grew tired of our blind swordsman. The differences might not always be obvious, but each Zatoichi flick finds new ways to utilize its titular character and I’ve noticed that around this point in the series, the theme is how Ichi is fallible. He’s no longer the invincible, benevolent, cunning warrior that the early sequels postured him as. Now his presence is likely to make things worse for the people around him and he can make critical mistakes at the worst times. This doesn’t dilute the integrity of the character, who still is the same guy we got behind in “A Tale of Zatoichi“, but Ichi is more than aware of his limitations. He can be pleasant and goofy, but he’s becoming more and more jaded. That character journey is what keeps me coming back. “Samaritan Zatoichi” provides some excellent sword fighting, hilarious comedy and impressive flourishes of style, but its anchor lies within its protagonist.

Longtime fans will find themselves raising eyebrows at how “Samaritan Zatoichi” portrays Ichi as someone who is losing his touch. Early on, he takes a rather cold blooded job from the local Yakuza, which is to kill some random gangster who failed to pay back a lone. You’d expect Ichi to ultimately take the side of the target, but shockingly, he ends up killing the poor guy. While it is never outright stated, the implication is that Ichi has fallen on hard times and really needs the money, even though Ichi has always had a decent sized wallet in the past. Unfortunately, nothing is ever simple and he realizes that the man did not deserve death. He wasn’t lying when he said his sister- Lady Sode (Yoshiko Mita)- would be here soon with what he owes. It turns out that the Yakuza and a corrupt official had conspired to force the victim’s sister into prostitution, forcing Ichi to become the hero. Another odd touch is that Ichi’s fame seems to have diminished, as no one seems to recognize him- fitting snugly into the idea that Ichi’s better years have past him. The problem is that Lady Sode knows he is the murderer and does desire revenge. Or does she? That internal conflict made her one of my favorite Zatoichi females and it creates an interesting dilemma. How does Ichi deal with a woman who deserves vengeance against him? Their uncomfortable relationship is compelling because it doesn’t play out in an conventional manner. The actors had strong chemistry and I was actually cheering for a romance. We also see Ichi fail miserably at gambling, a VERY new idea and even his classic attempt at cheating (which is portrayed as shady instead of charming) backfires on him. Never before has Ichi felt so mortal and he’s constantly making questionable and clumsy decisions, even though you always understand why he’s making them. The final battle has Ichi being pushed to his limits by a single person, showing that he no longer securely holds the position of the top dog in terms of combat. In short, Ichi is getting a little old and it has begun to show in every aspect of his character, even though he’s still cunning and dangerous enough to be the same character. I adore the subtlety with this approach, as I can’t recall any moment where it outright says how Ichi has fallen. Katsu is excellent as always, maybe even a little better than usual, as he gets to do so much more. 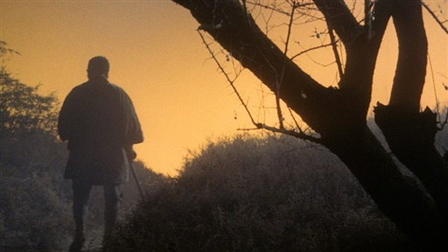 “Samaritan Zatoichi” also begins experimenting with new lighting and sound techniques, which mostly pay off. There’s a lot more color, which creates an especially surreal mood during those ‘fantasy’ sequences. I thought the spot light was an interesting choice, as that is how we see Ichi as he fights in complete darkness. Yet visually, “Samaritan Zatoichi” doesn’t quite stand out as much as “Zatoichi and the Festival of Fire” or “Zatoichi’s Pilgrimage“. There are definitely flourishes of style, but it’s as if this one is bridging the gap between the aesthetics of its predecessors and the colorful imagery of its successors. I thought the misty backgrounds were very atmospheric and the sound design was pretty creative too. When Ichi has his final confrontation with Kashiwazaki (Makoto Sato), the drums from the festival become increasingly louder to where it nearly drowns out all the other ambiance. That was a nice touch and speaking of which, the action is awesome. I won’t say that “Samaritan Zatoichi” contains an abundance of sword fights, but it does contain enough and the choreography is phenomenal for its time. ‘Ichi Vs Kashiwazaki’ might just be the best final duel to appear within this franchise as it’s quite the elaborate battle. The director uses close ups to show us the strategies that they are developing within their heads as they fight and both sides seem equal. I will concede that there are some flaws, especially when it comes to Kashiwazaki the Ronin. He doesn’t tie into the overall story very well, often feeling like an afterthought and he constantly keeps showing up through sheer coincidence. There have been more developed opponents for Ichi in past films, but I did like how Kashiwazaki was presented as ichi’s equal- if not superior- in intellect and skill. The actor has a charisma about him that redeems the flat characterization though. I also didn’t understand the point of the subplot where Ichi gets framed, as it never really leads anywhere. Nevertheless, “Samaritan Zatoichi” shows that even though there have been 19 films, the cast and crew still want to produce a quality product that is just as inspired as the original. They continue to deliver new angles and ideas- both visually and in terms of storytelling. This pleases me.

Violence: There is some.

Nudity: None, although seemingly everyone wants to rape the heroine.

Overall: “Samartian Zatoichi” is an excellent addition to the franchise and might even make a good gateway for newcomers.