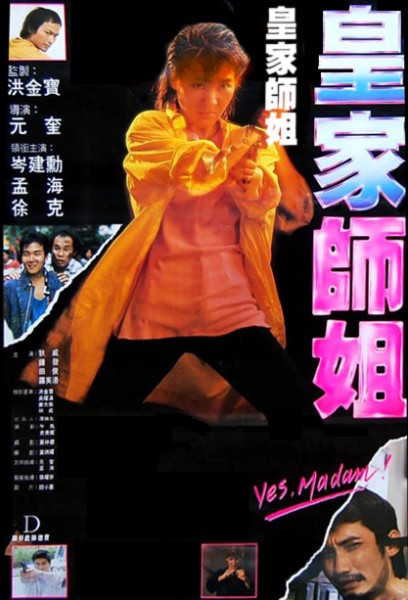 Plot: Two petty thieves, Asprin (Mang Hoi) and Strepsil (John Shum), stumble upon a conspiracy surrounding a murder case. Now they are being hunted by assassins who are skilled in martial arts. Their only chance of survival is if two female Inspectors (Michelle Yeoh and Cynthia Rothrock) can put aside their differences and work together to stop the villains. Also known as “Huang jia shi jie” and “Police Assassins“.

So why have I chosen to watch and review “Yes, Madam“? Because I wish to become acquainted with the works of Cynthia Rothrock! I like to consider myself…a carna…carni…carnosaur? connoisseur! I like to consider myself a connoisseur of martial arts cinema, armed with a vast vocabulary, a library of knowledge and a sharp mind for critiquing, but I only have one flaw…I am a Cynthia Rothrock virgin! Maybe my cherry was popped when I was a mere child, but I can’t recall such a sordid occurrence, so I don’t think anything happened…or maybe “Tiger Claws 3” is a repressed memory…The woman never really achieved major stardom, but she did develop a cult following throughout the late 80’s and early 90’s, so it was time I became a man! I decided to start with her Hong Kong works, as they are actually considered ‘good’ and not in an ironic way, so “Yes, Madam” was selected. I even got the added bonus of this also being Michelle Yeoh’s starring debut, so my first time would certainly be great! Actually, it was a bittersweet experience. It ended abruptly, there was a lot of yelling, bickering, obnoxious laughing, a lack of focus and then two guys named Asprin and Strepsil got involved and became the center of attention…It was weird…But at least a lot of people got beat up with style in the process!

“Yes, Madam” is a reasonably enjoyable kung fu bonanza, making sure its punches and kicks find their desired target, even if there were a lot of wasted movements. Cory Yuen is the director though, so what do you expect? The choreography is good, although I felt it only truly caught fire during the finale- which is awesome. There is a lot of over-the-top dicing and striking, with the stuntwork being impressively brutal. Everyone seems to be crashing through glass and I’m pretty sure Cynthia Rothrock broke the fourth wall and sent me flying through a window into glass furniture that I don’t have. Everything building up to the epic third act is more of a tease, some quick brawls and hand-to-hand scuffles in order to set up the final battle. It’s broken up nicely though, so it always feels like action was waiting behind every corner. The sound effects needed to be stronger and more pronounced though. Just as Michelle Yeoh and Cynthia Rothrock play wildly different characters, they each bring something wildly different to this project. Yeoh is easily the better actress and her movements are graceful. She’s acrobatic and her fights are fluid, despite her lack of martial arts training. Rothrock might not be a very good actress, but she has a lot of presence and is more convincing in the action department. She is a legitimate martial arts practioner and her attacks looked a lot more authentic, although her fights are also very stylish. Both women balance each-other out nicely and have chemistry, which is a shame because…

They might be the stars, but they aren’t really the protagonists…

Yeoh’s character is a laid back, polite, professional who is looking forward to some vacation time and Rothrock’s character is a tough-as-nails, highly aggressive brawler who doesn’t seem to get along with anyone. That is the extent of their personalities. Apparently Ng (Yeoh) has some sort of relationship with the murder victim, but it’s never made clear and she never shows any emotion over his death. Why is Morris (Rothrock) so angry all the time? I dunno. They develop in that they get along and Ng becomes more emotionally invested in the plot…but I never quite understood why. Why would Ng throw her career away to catch someone who killed people whom she had not shown any attachment to before? Why would Morris do the same? Why didn’t the writers spend more time fleshing out their motivations and characterizations? I suspect the two writing credits might be at fault. Maybe one wanted to focus on the ladies and the other wanted to focus on the REAL heroes of this story: Asprin (Mang Hoi) and Strepsil (John Shum). More attention was put into their back-stories, their personalities, their relationships with each-other (and Panadol (Hark Tsui)), their motivations and they even develop as characters. They’re initially victims of the narratives’ whims, but they gradually become more pro-active, revealing their true colors and they even change as the story progresses. The funny thing is…these aren’t badly written characters. I often found their storyline to be more interesting than the storylines of the two leading ladies, even though there was significantly less kung fu involved. So there are ultimately two stories, one involving human props who exist to deliver high octane action sequences and the other with real characters who make a stronger connection with the audience as they take us on a journey with the REAL plot. “Yes, Madam” has a narrative that’s trying to eat its own tail, except I’m not sure which end is the tail because…Asprin and Strepsil can be pretty f@cking annoying. Remember that this is a post-“Police Story” kung fu flick and this means that there’s going to be lots of slapstick comedy. Unfortunately in Hong Kong this often translates into ‘over-the-top mugging and lots of bickering’. While I sometimes did laugh, there were times when I had to find some…ugh, aspirin. I swear I did not intend to make a pun when I began that sentence. The plight of Asprin and Strepsil may have been more engaging, but the yelling and vitriolic banter got old fast. Yeoh and Rothrock might’ve been portraying one-dimensional caricatures and sometimes the tension between them was exhausting, but I had more fun watching them kick a lot of butt. Nevertheless, it’s bizarre seeing them reduced to supporting characters in their own starring vehicle. The comedic relief duo drive the plot and the heroines are merely along for the ride.

Is “Yes, Madam” funny? I laughed at the repeated use of the score from “Halloween” (!!!). I also smirked when the dialogue was borrowing from other movies, such as “Dirty Harry“. With that said, there are some genuinely amusing situations and reactions. But the comedy in general is very broad and noisy, because that is what was popular in Hong Kong during this time period. You have to consider your own tastes in humor when deciding whether or not this film is for you. I do believe “Yes, Madam” is a fun flick if you can ignore the broken narrative and endure its often oppressive style of comedy. The fighting ranges from stellar to awesome and the stuntwork is smooth and edgy. I liked the two leading ladies and I even got a Sammo Hung cameo. Of course, his presence means that “Yes, Madam” is doomed to have an inappropriate downer ending…But at least there wasn’t any rape…er *flashbacks*, at least there isn’t any REAL rape. But this is a solid example of the genre, perfectly reflecting the cinematic trends of its time period, succeeding in the areas that it needed to succeed in.

Nudity: None, although there are some perverted antics.

Overall: “Yes, Madam” is an acquired taste, as its flaws and eccentricities might be a little overbearing for you. But if you can get past that bitterness, enjoy the sweetness of the action choreography.