(Written and Directed by Robert Eggers) 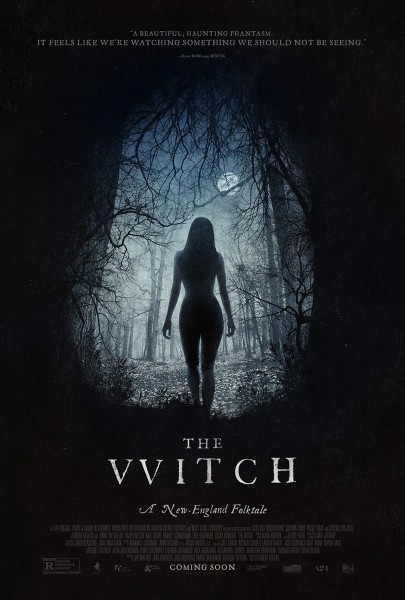 Plot: In the 1630’s, a family is exiled from their town and they settle at an isolated location in the woods. Unfortunately, their hidden neighbor is a witch, who has malicious intentions for the new arrivals. Also known as “The VVitch“.

Every year there will be a horror movie that successfully burrows itself under the skin of general audiences, inducing shivers and convincing even the sturdiest of adults that things go bump in the night. 2015 had “It Follows“, 2014 had “The Babadook” and 2013 had “Grown Ups 2“, all films which terrified the masses. “The Witch” appears to be ‘the horror’ experience of 2016, although who knows what else the year will sneak upon us. However, lurking underneath all of that fear and acclaim lies a seedy, grotesque monstrosity known as…over-hype…What scares us is subjective and sometimes we will go into “Paranormal Activity” eager to wear our brown pants, only to wonder why everyone else was so enthralled. “What is so scary about a door moving?” They will ask and fans will respond with “Because it relies on the implications of what moved the door and is part of the general mood“, but even if they begin to understand the reasoning, emotions can rarely be changed. I bring this up because while I respect “The Witch” for its technical merits, bold storytelling decisions, attention to detail and oppressive mood, I won’t say the experience left a major impact on me. My underwear remained clean and it didn’t haunt me on the way home. Does that mean this is an overrated movie? Not necessarily, but it never really frightened me.

“The Witch” really went out of its way to feel like an accurate portrayal of the 17th century, with the costumes, sets and accents at least feeling authentic. Robert Eggers was so obsessed with recreating the time period that even the dialogue sounds ancient, which is just as impressive as it is alienating. The characters are speaking English, but the dialect is so different from the contemporary version that they might as well be speaking a foreign language. I spent the majority of my viewing experience trying to figure out what everyone was even saying! I heard a lot of ‘thees‘ and ‘thous‘ and I’m pretty sure I heard the family reviewing a Steven Seagal movie at one point (“Against the Dark” brings out the devil in me too), but I have to ask…why? I like the idea and it certainly adds a lot of flavor to “The Witch“, even being a major part of its identity, but I thought it was more distracting than immersive. One should not spend the majority of their viewing experience trying to decipher each and every line! I would’ve been more accepting if there wasn’t a lot of dialogue, but “The Witch” is very talky, so this aspect might annoy you. Or it might enthrall you, especially if you have sharper ears, a better understanding of old English or at least don’t mind being kept out of the verbal loop. It comes to the individual viewer, but I have a lot of respect for the actors who deliver the dialogue with such intense conviction that I always made an effort to understand what they were saying…even if I failed… I liked how each of the characters had diverse, colorful personalities which stood out despite the language barrier. They all had strengths and weaknesses, which sometimes become blurred and each felt very human. The filmmakers could’ve easily made the Father (Ralph Ineson) or the Mother (Kate Dickie) ‘Straw Christians’, designed to be a scathing criticism of religion. But I always felt like I understood their perspectives, even when it starts morphing them into antagonists. “The Witch” is nihilistic towards everything and God remains silent, while the Devil makes a lot of noise. Yet while faith seems impotent within this world, I never felt like Christianity was being condemned. The characters’ flaws (pride, lust, wrath) are independent from religion and you get the impression that even if they were atheists, not much would change. I did notice a significant amount of existentialism within the character arcs and the interpretative and actions of the characters added a lot of depth to the script. 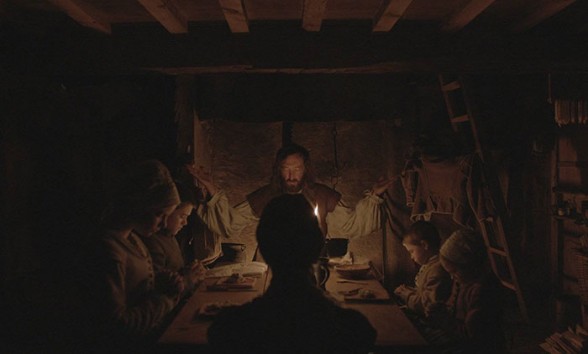 I would say “The Witch” is a more uncomfortable horror movie than a particularly scary one, focusing mostly on unsettling us with the implications of what happens off-screen. Director Robert Eggers creates a very grim atmosphere, bathing his already spooky location with bleak colors- particularly grey. Eggers has an eye for haunting imagery, although I felt the cinematography truly shined when it was preying upon our claustrophobia. Exterior shots focus on how small and confined their dwelling is when placed next to those dark and sinister woods, while the interior shots use close-ups to make us feel trapped with the characters. The music perfectly fit the tone, while also sounding awesome enough to make me want to purchase the soundtrack. Those intense violins were alarming and I’m pretty sure they started using the theme from the “Godzilla (2014)” trailer at one point, although it’s possible that I’m mistaken. Regardless, the score gave me chills, although “The Witch” knows when to use silence and ambiance instead (incredible sound design!). Eggers utilizes a slow burn style of suspense and that tension kept mounting and mounting and…then just kind of left me hanging…He knows how to put his audience in awkward and unpleasant situations, where we feel the dread. The imposing danger is palpable and I was personally on the edge of my seat, wide eyed and finger nails chewed. Yet “The Witch” lacks the required catharsis for this buildup, where the whimper becomes a shriek. Every time things started to become terrifying, the scene would abruptly end and move on to something else. I was hoping that the ending would make up for this…and then it didn’t…The conclusion isn’t bad, even if I’m still internally debating whether or not it made sense from a character arc perspective, but it wasn’t scary. I’m not saying there needed to be any jump scares, but he needed to do more with the suspense. I still think “The Witch” is a good movie though, with nuanced characters and creepy atmosphere. At the absolute least, it’s a bold experiment that stands out for trying something completely different. But it was upstaged by its own hype and didn’t quite meet my expectations.

Nudity: You see a fair amount, but most of it isn’t very pleasant.

Overall: “The Witch” is good and will probably appeal more to high brow viewers, but it wasn’t as scary as I hoped it would be.