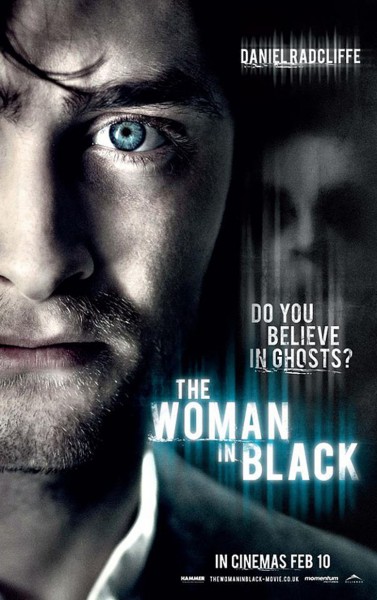 Plot: A young lawyer travels to a remote village in order to settle the affairs of a dead crazy woman, only to learn that her ghost is preying upon the village’s children.

Note: This is a re-review, but I changed a lot of the content.

Hammer Studios dominated the horror genre in the 60’s, even though they were around before and after. They became infamous for their Gothic horror films that relied on suspense, set designs and dread filled atmosphere, sprinkled with implications of violence and sex (cutting edge at the time). I don’t consider myself an expert on Hammer, but I am a dedicated student who has acquired a good amount of knowledge.. “The Curse of Frankenstein” is one of my favorite films of all time and “The Horror of Dracula” isn’t far behind. Even misfires like “The Two Faces of Dr. Jekyll” are unique and intriguing by todays standards. Plus, the actors were played by veterans who had good dialogue to work with. But no one will watch any of those films these days and call them “scary”. Moody? Sure? Chilling? Perhaps, but rarely will anything plague our nightmares. Horror has changed too much.

These days, scares are more advanced. There is greater usage of the foreground and background, which is what personally freaks me out the most. Our technology allows us to use lighting more creatively and there aren’t as many boundaries in regards to what can be shown. Unfortunately, most horror films fail to use these new gifts and instead opt to whore out jump scares instead of legitimate chills, probably because they work better within the context of a trailer. That is the main difference between then and now when it came to mainstream horror. “The Woman In Black” was the first old school Gothic film produced by Hammer since its revival and I was immediately intrigued. But would it be a throwback to the 60’s or a modern day style of horror? Luckily, the film turned out to be a marriage of the clashing times. “The Woman in Black” combined what I loved about 60’s horror films and what I love about modern day horror films, although the end result isn’t quite the masterpiece I wished it would be.

Arthur Kipps (Daniel Radcliffe) is a young widower whose grief has begun to affect his duties as a Laywer. Problem number one, Radcliffe is way too young for the part. I can buy him as an ‘up and coming’ lawyer, but a widower with a son? This is mostly redeemed by his moving performance, but considering Hammer films usually relied on guys like Peter Cushing or Christopher Lee, I would expect the protagonist to at least look like he’s gone through puberty. Anyway, he gets the chance to prove himself by traveling to remote village in order to settle the legal affairs of a dead recluse, who owned an isolated, lavish- but now dilapidated- mansion. Once he arrives, Kipps is greeted with hostility towards the villagers and quickly learns that there is something supernatural targeting the local children. But what is going on and why?

The moment when Kipps confronts the villagers, I knew I was in comfortable territory. “The Woman in Black” recreates most of what I loved about the Hammer films of old. For one, the Edwardian age setting is almost as awesome as the Victorian era- which was Hammer’s favorite time period. To me, horror works best in the past, where cell phones don’t exist and creepy innkeepers glare at people menacingly. Good times. But while the limited budget obstructs things a bit, the locations are excellent. The mansion is vast and spooky, but boasts a feeling of authenticity because you can see where at one point, it probably was an attractive place. There are decorative designs and lots of color, but the state of disrepair has morphed the location into something unnerving. The marsh arguably upstages it, being both creepy and pretty at once, while also boasting a distinctiveness rarely found within the genre. I can’t think of another movie, outside of the sequel, that has a similar location. The cinematography really has a lot of fun in capturing the chilling, fog filled atmosphere that these sets provide. The feeling of isolation and dread is consuming and I constantly felt my heart beat rapidly in anticipation. I loved how the tide would arrive and trap our hero in the manor, an idea that was thoroughly underutilized in “The Woman in Black 2“.

I wouldn’t call “The Woman in Black” old fashioned though, despite using a lot of old school tactics. There are some jump scares, creepy dolls (did I hear the “Saw” doll laugh?), sudden loud noises to throw us off our guard and ghosts who appear for brief glimpses. For once, the boo scares actually work because they show how paranoid the protagonist is becoming. But the films most frightening moments come from the buildup. A strange sound will be heard upstairs or something ghastly will emerge from the marsh, or faces will appear in the windows or figures silhouetted in the trees. The filmmakers know how to build upon our anticipation by carefully pacing itself and being creative with the scares. The use of shadows, lighting, locations and sound all came together to make a film that freaked me out consistently. I constantly squirmed in my seat, so clearly the films brand of terror worked its magic on me.

Unfortunately, “The Woman In Black” is like “Insidious” in that it works primarily for the execution, not its story. The script is very average, although there is some stellar dialogue. The plot has a predictable flow, even when it is trying to be edgy, so don’t expect the story to surprise you. The mystery in particular offers nothing new, from the explanation to the resolution. “The Woman In Black” is conventional at its core, only redeemed by his energetic and spooky execution. Some subplots that are introduced don’t go anywhere, so maybe a lot of this movie ended up on the editing room floor, but I don’t know if that would’ve made the story any deeper. But I liked “The Woman In Black”. It was a good throwback to Hammer Horror films, while not alienating modern day audiences with its scare tactics. Note: I constantly point this out, but remember that fear is subjective. I find ghoulish figures appearing in windows and in the backgrounds, for example, to be unnerving if done well. What scares me might bore you and what bores me might scare you.

Overall: “The Woman In Black” is a spooky ghost film. But if you don’t like ghost films, the only difference between this and most is its setting.