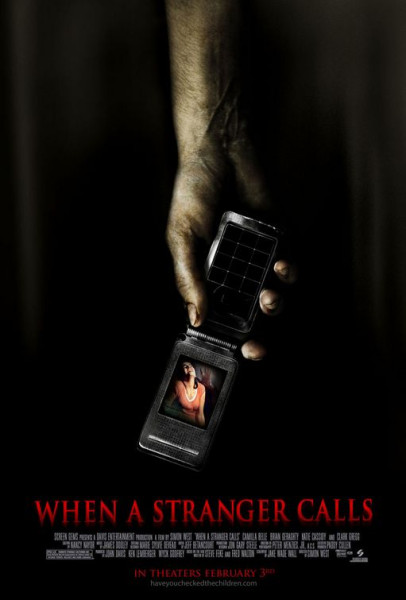 Plot: Jill (Camilla Belle) is grounded and part of her punishment is that she must babysit for some rich people. The evening starts out as uneventful, but then a stranger starts making mysterious phone calls. They get progressively creepier and Jill starts wondering if she is being stalked.

The original “When a Stranger Calls (1979)” is remembered for its insanely creepy first act, where a babysitter is stalked by a psychopath who leaves her unsettling phone calls. It builds to the epic line of “The calls are coming from inside the house!”. While not as often talked about, it also had a pretty good third act, where the psychopath confronts the (now older) babysitter again. These scenes were pretty scary, even if they did rip off “Black Christmas (1974)” pretty shamelessly. But what about the second act? Doesn’t anyone remember it? I don’t. This is because the beginning and ending belong in a good horror movie, while the middle block seems like it was lifted from a mediocre police procedural. Or maybe a generic psychological drama. The filmmakers of this remake appear to have understood the flaws of its original, so they decided to cut out the cop subplot and focus on terrorizing the babysitter. That’s a good thing, right? Well, read on.

The biggest criticism regarding “When a Stranger Calls (2006)” is that it feels like a 30 minute short that was stretched into a 90 minute feature. There just isn’t enough available material to do a movie about a babysitter receiving creepy phone calls. It gets old rather quickly. The director of the original probably realized this, which is why it becomes about the struggle between the cop and the psycho. Nothing about that story was exceptional, but at least different stuff was happening. The remake just has the babysitter walking around and doing mundane activities for long periods of time. The first act is acceptable and the finale is kind of intense, but while the second act at least feels consistent in tone, it’s just gratuitous padding. It’s even more bizarre when what should be important plot points are left untouched or unresolved. Yes, even the plot development comes across as filler.

A large chunk of screen-time is dedicated to Jill searching for the Maid, who we see is still at the house but seemingly vanishes out of nowhere. We know that the Maid is probably dead, but the film keeps offering so many faux hope spots that she is still in the house that you start to wonder if she is supposed to be a red herring. She’s not, but that subplot does waste a lot of time. Or what about the guest house? Jill is told that the couples’ older son might be staying there, so Jill goes to investigate when things turn bleak but finds nothing. Was he supposed to be a red herring? Or what about the boyfriend? I kept expecting him to show up considering how often the movie cuts to him or just mentions him, but he never does. There is also a scene where one of his friends prank calls her, but once again…why? It’s supposed to disarm her a bit, so she can presume that’s where the calls are coming from, but that lasts for like 5 seconds. Eventually her friend shows up too. Why? So she can provide a boo-scare and then die. Although the movies’ explanation is…stupid. This might not be on the level of padding as walking around for 20 minutes, but it is its own kind of padding. Furthermore, the notorious ‘the calls are coming from inside the house’ line doesn’t have quite the bite the original did because…the movie makes it clear he has access to the property. The original isn’t as obvious, so it worked.

Yet I have to admit, part of me does kind of like “When a Stranger Calls”. There are some legit good reasons to enjoy this movie. Camilla Belle is a compelling lead, there are a few moody shots and some intense moments. But I love how desperate this movie is to keep the viewers interest. They force so many boo-scares into this picture that it’s hard not to laugh. It’s 2006 and the filmmakers think that throwing a cat at the audience is still scary? LOL. Much like “House of the Devil”, “When a Stranger Calls” is exploiting the fear of being alone in a creepy house. But the music here just makes it difficult to take seriously. When the doctor punches in the security code for the alarm system, ominous music begins to play…Why? Apparently that was supposed to be scary? It’s as whoever arranged the music realized there weren’t enough genuinely scary sequences to have fun with, so treated every scene as if something terrible was about to happen. While the music in itself is fine and that breathing sounds were pretty unnerving, the score is used so poorly that it became amusing. 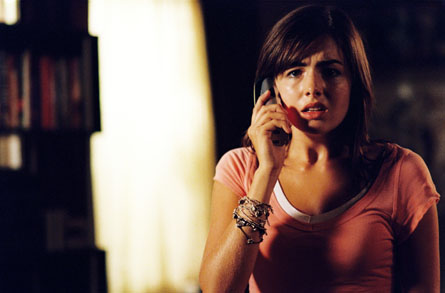 Other than this though, “When a Stranger Calls” suffers from some typical bad movie moments. The whole thing with the alarm system is hard to follow, as I could’ve sworn she activated it again while the killer is presumably outside. She tends to forget to arm it again when its convenient for the story too. The killer seems near omnipresent with his ability to appear anywhere at any time. When the girl gets into a car, it won’t start even though it looks brand new. Characters do stupid things to drive the plot. Simon West does what he can with such a flimsy story, but as I said, this usually means resorting to desperate boo-scares. But really, during your viewing you’ll probably be more distracted by how very little seems to be happening. It’s a bad movie, but sometimes I just happen to enjoy it….

“When a Stranger Calls (2006)” was made back when PG-13 remakes of R-rated horror films had become a fad for some reason. It’s funny how these directors picked the worst movies to remake. “Prom Night (2008)” was a remake only in name, because “I Know What You Did Last Summer” had already critically ripped off “Prom Night (1980)”. “The Stepfather (1987)” was the kind of movie which could only be made in the 1980’s because that decade had balls, combining the violence of a slasher with the story and suspense of an edgy thriller. Remaking it in 2009, which is “what they did” and making it PG-13 just meant that the remake would be a generic thriller with an unoriginal story. Those films just want the name value of the original and MAYBE the premise. They’re more interested in marketing than movie making. That is why these PG-13 remakes usually sucked. When you make something for the wrong reasons, it’s probably not going to be very good. “When a Stranger Calls” is just as guilty of this and like all of the above examples, it shouldn’t have been remade due to the source material lacking worthwhile content. But I do respect that it TRIED to keep me invested and in the end, I sort of was…even if I was laughing at its attempts to make me jump instead of actually jumping.

Overall: “When a Stranger Calls” isn’t really worth watching, but it’s kind of a guilty pleasure to me. It’s probably the best of those PG-13 remakes of R-rated cult classics anyway.