(Written by Michael and Shawn Rasmussen) 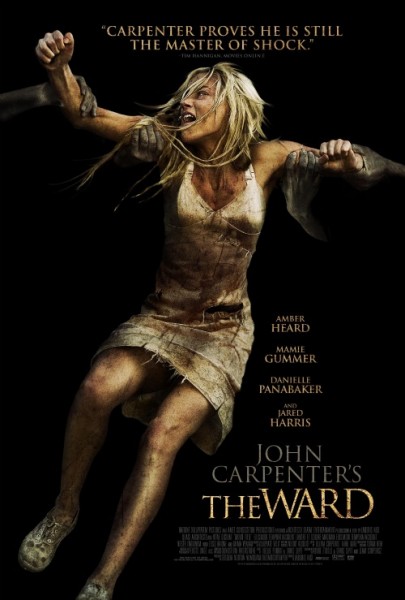 Plot: Kristen (Amber Heard) burns down a farm house for reasons she cannot remember, so is placed in a mental institution, under the care of Dr. Stringer (Jared Harris). A bad situation turns worse when she starts having visions of a ghostly entity. Then the inmates start to vanish. Set in 1966.

When you think about it, John Carpenter’s downfall likely began with “The Thing”, even though it is one of the greatest horror films of all time. Despite the high quality, it was a box office bomb and the majority of Carpenter’s movies from that point on would flop too. Some deserved it (“Ghosts of Mars”), others didn’t (“In the Mouth of Madness”). Yet there was no denying that his final few films had suggested that Carpenter was no longer the same director who gave us classics like “Halloween”. Now he was trying way too hard to be hip and it seemed alien to him. He joined many other has-beens’ with the “Masters of Horror” series, although apparently one of his entries (“Cigarette Burns”) is actually pretty good. “The Ward” was supposed to be his big comeback, a small horror/thriller that would be a return to his roots. Unfortunately, it was a bittersweet experience as you can see the Carpenter of old occasionally returning, only to be undermined by sloppy writing and questionable direction. “The Ward” isn’t bad, but it’s not very good either.

The first thing I noticed about “The Ward” is that Carpenter seems to be channeling the ghost of Dario Argento when it comes to the visual style, which is strange because Argento is still alive (although his talents appear to be dead). The camerawork is very flashy, bordering on experimental and the score feels like it belongs in a demented fairy tale. The exaggerated lighting provided a spooky, old fashioned atmosphere that gave me a case of the chills. Unfortunately, the films best scene is its opening kill. While Carpenter would still deliver a healthy sense of dread, due to the polished cinematography and music, we only see ‘moments’ of greatness. There are times when yes, I ‘almost’ felt scared. But the quality of the direction is erratic. At least it moved at a swift pace, so even when I was annoyed, at least it never bored me. 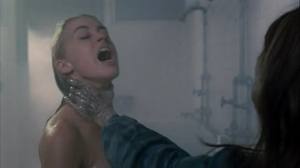 Many have complained that “The Ward” doesn’t appear to know what it wants to be. Is it about ghosts? There are definitely some nasty looking specters creeping about in this hospital, so that is a distinct possibility. Is it a slasher? Various parts suggest that maybe the staff is involved behind the disappearances and the kills are bloody enough to qualify. While the first act emphasizes slow burn suspense and moody atmosphere, it begins embracing violence and jump scares. One of my complaints about Carpenter’s direction is that the jump scares mostly fall flat, never making me flinch. Maybe “The Ward” is a psychological thriller? Kristen obviously has some issues, as she keeps having visions of herself as a child, chained in the barn. We can’t discount the possibility that everything is taking place within her head. But if “The Ward” can’t make up its mind as it is, there are also some torture porn elements thrown in there. Personally, I didn’t mind its genre-bending as it provided many different scenarios as to how the movie could play out. When done right, I’m a sucker for ambiguity and the lack of solidity within its chosen genre made everything that much more mysterious.

It’s just too bad the ending really fucked it up.

The finale was just downright stupid. Actually, before I get into that, let me complain about the poor writing in general. “The Ward” reeks of redundancy, constantly having Kristen escape only to be recaptured by the SAME GUY. That got old. We can’t help but that the feeling that security in this place blows, the most laughable example being when some inmates casually are able to raid the medicine cabinets, which are supposed to be guarded. But the ending….God, the ending. The finale has Kristen finally confronting the ghost and engaging in a battle of kung fu with it. Okay, I’m exaggerating. But the story is pretty much resolved with a wrestling match. It felt so out-of-place, reminding me of the goofy brawl at the end of “Scary Movie 3”. But the major ‘twist’ at the end was even worse. For one, I’m convinced they ripped off a movie that came out in 2003. Two, instead of being surprised, I felt cheated. It was as if this twist justified all the previous moments of bad writing. I can’t stand endings that make the majority of the film seem pointless in retrospect (the 2003 film did it better). This arguably ruined “The Ward” for me, turning an ‘okay’ movie into a ‘eh’ one. 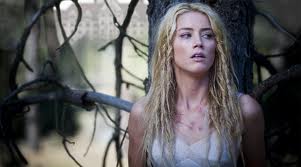 Luckily, considering the low budget, “The Ward” was slickly produced. With the exception of the torture porn scenes, I never felt it looked cheap and even those parts seemed intentionally grainy. The exteriors and interiors of the hospital looked impressive, striking a nice balance of menacing and grand. Finally, Carpenter snagged an impressive cast. I’m a huge fan of Amber Heard (“Drive Angry”), one of the few conventionally attractive actresses who can deliver a very unconventional performance. She doesn’t have much to do other than be rebellious or confused, but I liked how those elements weren’t the extent of her personality. She can be cold and bitchy, but also compassionate and warm. Jared Harris (“Sherlock Holmes: Game of Shadows”) also turns in a credible show as the doctor whom we aren’t sure is trustworthy. The rest of the cast is playing familiar characters: The wack-job, the hot chick, the smart girl and the mysterious one. They can all be very annoying, but the actresses played their roles well.

I really wanted to like “The Ward”. When it works, I thought it was exceptional. There is a lot of talent in front of the camera and Carpenter shows that he hasn’t completely lost his touch (unlike Romero, Argento and maybe even Craven). However, the script failed him and Carpenter made the mistake of not ordering re-writes. I’m not a professional filmmaker and even I know that having a fist fight with a ghost only belongs in a parody. Then you have that awful, unoriginal- but it seems to think its original- twist that dragged this movie into the fiery pits of hell. With that said, “The Ward” does give me some hope that Carpenter might be able to give us at least one great movie. But it’s not even close to being one itself.

Violence: Rated R. It can be pretty hardcore. Various kills tie in nicely to ‘insane asylum’ horror, including shock treatments and lobotomies.

Nudity: Some, during a shower scene. Also implied child molestation.

Overall: “The Ward” is worth a watch for die hard fans of John Carpenter. But don’t expect much.