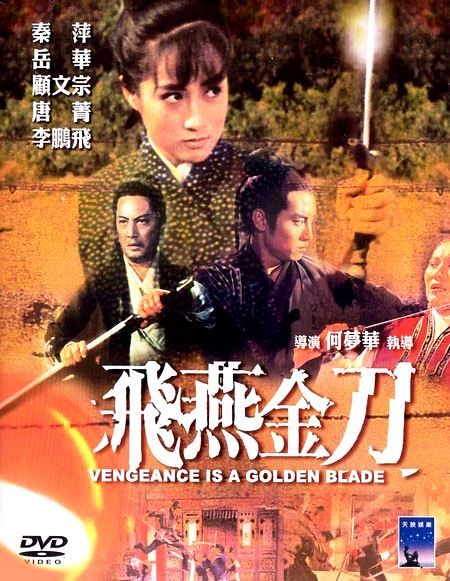 Plot:  Xiaoyan (Chin Ping) is a swordswoman who wants vengeance against the men who crippled her Father (Tang Ching), but he won’t tell her who is responsible. In truth, the perpetrators are the leaders of a gang of ruthless bandits who conspired with her adulterous Mother (Kao Pao Shu) in the attack. But when Xiaoyan crosses paths with her long lost Mother, things get…complicated…Also known as “Fei yan jin dao“.

If you are interested in watching “Vengeance is a Golden Blade“, please accept that this is a drama which focuses more on characters than it does action- even though we do still get quite a bit of swordplay. I knew about this in advance, so was able to adequately prepare my expectations for a genre that I’m not particularly interested in covering. At first, I wasn’t really a fan. The martial arts choreography has aged badly, primarily because it looks like the actors are afraid that they might accidentally hurt someone. Did they use real weapons? Because that concern looked real and very unintentional. It’s hard to take a fight scene seriously when the guys who are trying to kill each-other are obviously trying to avoid killing each-other. Even worse, I found myself palming my face in frustration whenever the characters would do something so incredibly moronic in order to advance the plot. I was struggling to sympathize with anyone, as Li Zhishan (Tang Ching) tells his wife to commit suicide because of her affair. That’s kind of horrible by todays standards, but we know that his wife- Yuexiang (Kao Pao-shu)- is already conspiring to murder him. Xiaoyan (Chin Ping) is much more likable, but her naivety eventually started to get on my nerves as well. Naturally, the lack of action and my indifference to the characters were not making the best of bed fellows and I was not pleased.

The script does have a certain amount of depth to it, even hiding some pretty good twists underneath the surface of the story. But while it’s prone to contrived plot manipulation- such as Xiaoyan just happening to wander onto a meeting with her estranged parents, just in time to learn something important- I started to notice character development. People change throughout the course of the film based on what happens to them. I began to appreciate its resistance of certain tropes, even when it was snugly embracing those tropes. Example, Li Zhishan is the stern Father, but this isn’t taken as far as it usually is and wasn’t the extent of his characterization. I attribute much of the success to the actors performances, as they would often sell me on the drama when the script failed to do so. Xiaoyan’s bloodthirsty desire for revenge felt a bit abrupt to me, but Chin Ping WAS perfect in making that transition work. She’s very believable as the naive, sweet but hot headed girl. Yet when she gets that intense, blood curdling stare, even I began to fear her wrath. This is especially amusing as I was struggling to buy her as a martial artist at first, but when she goes on her killing spree, her entire demeanor changes so dramatically that…well, I bought her as a martial artist…I really bought her as a martial artists…Kao Pao-shu has the best role as the adulterous wife and scheming Mother, as you aren’t entirely sure what her motivations are in the long run. Is she going to sell her daughter into prostitution? Does she care for Xiaoyan at all? She could’ve easily been a cartoonish villain and that smug look alone makes you hate her, but she has moments that made me question her allegiance. Tang Ching is also given a lot to do as the Father, showcasing a variety of emotions- often at the same time. I liked how you could always see an internal conflict etched on his face and when you learn the truth about everything, you realize that you could see it all in his eyes. After the connection was made between “Vengeance is a Golden Blade” and myself, the frustration I felt in regards to bad decisions often induced by poor communication was because I was invested. I got angry at the characters, not bad writing. I thought Xiaoyan trying to untangle the web of lies created by her parents was very interesting. I wanted to see everything work out for the heroes and I wanted to see the villains punished. Speaking of which, Long Zhentian (Li Peng-fei) was a pretty detestable antagonist because the actor successfully combines viciousness and cowardice, while always making him feel like a legit threat. “Vengeance is a Golden Blade” has good characters played by great actors, so yay.

The sword fighting starts off rather weak, but it does get better, especially during the last 30 minutes. Keep in mind that this is a 1960’s production and choreography was just a few years from getting major advancements, so much of the action looks awkward and dated by todays standards. Xiaoyan’s hand-to-hand abilities were especially unconvincing thanks to an obvious speed up effect. However, once Xiaoyan begins her onslaught, the fights become more intense and violent. You really feel the emotional content behind every slash and the choreography enters some dangerous territory. Lots of swords are swinging at once and yet the characters always manage to react in time. The final act contains a lot more combat, with plenty of interesting scenarios to keep it from ever becoming monotonous. I thought the bit where Xiaoyan and Long Zhentian are clashing in the water was especially creative and nicely shot as well. Meng Hua Ho is an excellent director, managing to keep our focus on the characters while also showing off some really cool visuals. The cinematography is gorgeous and the locations usually added a different dynamic to the battles. There are also some ambitious segments, such as when a fire breaks out during the storm. The miniatures and green screen (?) were a bit obvious in parts, but it was intense and very unique for this genre. “Vengeance is a Golden Blade” is a surprisingly sophisticated movie, being good for traditional reasons. But expect a movie that uses action to drive the story instead of an action packed story.

Nudity: There is some and there is quite a bit of sexuality, including attempted rape.

Overall: “Vengeance is a Golden Blade” is a good movie, but don’t expect non-stop action.