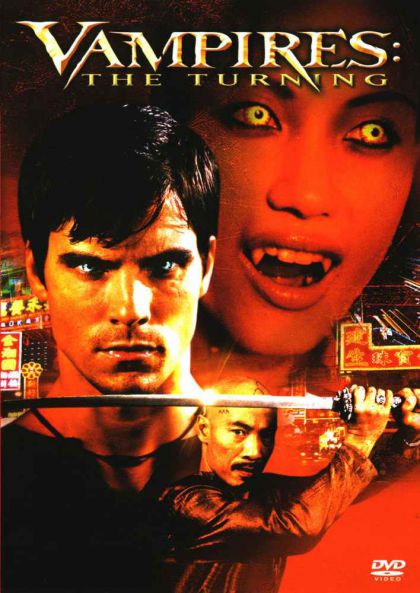 Plot: Connor (Colin Egglesfield) is a skilled kickboxer who must join a coven a vampires in order to rescue his girlfriend from a much more bloodthirsty clan of vampires.

“Vampires: The Turning” was marketed as a sequel to “Vampires (1999)” (decent) and “Vampires: Los Muertos” (mediocre), even though it was never intended to be part of that continuity. Yet that wasn’t part of its seductive allure. I was really drawn towards the premise, which could be summed up as: Kickboxing Vs Vampires. After inhaling that exotic fragrance, there was no stopping me from making a bad decision that I would surely regret the next morning. No amount of bad reviews, bad imdb ratings (3.1/10) and other warning signs- such as why have I not heard about this before?- could deter me from having hot, smoking, figurative sex with this movie. Of course, as soon as I ‘finish’, the shame begins to creep in as well as a sudden need to visit the doctor because who knows what kind of diseases this bitch is carrying. Or at least that’s what I was going to say. Much to my surprise, I found myself enjoying “Vampires: The Turning”. It provided all the ‘Kickboxing Vs Vampires’ mayhem I could ask for, even giving me some good martial arts choreography and spooky atmosphere in the process. I doubt I’ll give “Vampires: The Turning” my number, but I could remember our tryst rather fondly…

The biggest flaw surrounding “Vampires: The Turning” is that it was clearly a low budgeted film. If it had more resources at its disposal, I think the filmmakers could’ve given us a cult classic. The movie is very crude in certain areas and I suspect they ran out of money during the ending- or maybe the ending was designed to be so abrupt. Or maybe they were going for something more artistic (it does have shades of “The Graduate”). Either way, I felt that the film just stopped instead of ending, if that makes any sense. The film stock occasionally looks too grainy and the editing at times is questionable. Whenever a special effect is required, it’s doomed to be too shoddy to be convincing. The makeup, CGI, blood- it could’ve all been better. But most of all, the filmmakers would’ve been able to hire better actors. The only person who I thought came out looking good was Roger Yuan, who was underused. Everyone else either struggles with the overly dramatic dialogue (Stephanie Chao) or just can’t act. Colin Egglesfield might look like Tom Cruise and his martial arts skills are impressive, but his performance felt off from beginning to end. Yet he’s not even the worst, as a lot of bit players are either too hammy or too stiff. 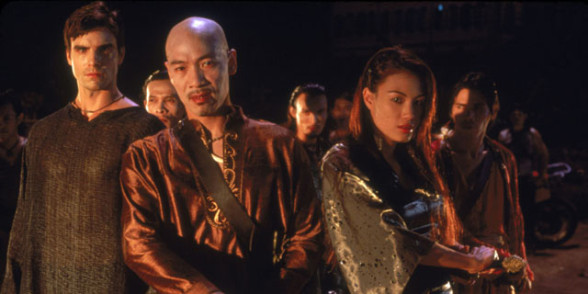 Shockingly, the action is pretty good. The fight choreography is fast paced (usually) and a variety of impressive techniques are on display. While the cameraman could’ve done a little bit better with keeping all of the action in frame, at least the camera wasn’t always jittery, nor the editing too tight. I thought the hand-to-hand combat sequences moved smoothly and looked great. When there isn’t martial arts, there is a pretty cool motorcycle chase. It wasn’t as intense as it wanted to be, but the stunt-work was very impressive. The final fight was a bit uneven though. Once Connor becomes a vampire himself, the filmmakers emphasize his new-found powers by whoring out wire works and slow motion. Eventually that’s discarded for more traditional choreography though, so the fight ends on a relatively high note. While this didn’t effect the actual kickboxing, I felt the whole philosophy angle was wasted. It’s brought up early on, but the context suggests Connor is attempting to justify his love of carnage and you don’t get the impression he develops. I have no idea why that aspect of martial arts was brought up at all. Still, I definitely prefer watching carnage over people talk, so it’s a minor complaint.

As a horror flick, the lighting is very colorful, being reminiscent of Mario Bava or Dario Argento. Occasionally it does become a little bit too dark, but generally the colors contrasted nicely and provided a nice aesthetic. The Thailand scenery porn is…rather pornographic. It’s a nice place to look at and the cinematography manages to exploit the exoticism of the location nicely. Some of the sets are rather creepy and the moody lighting manages to generate suspense, such as when Connor is investigating the coven’s layer or walks in a feeding den. The use of corpses during the latter scene was pretty chilling. I wouldn’t call “Vampires: The Turning” scary or even continuously creepy, but it does occasionally provide a spooky atmosphere. It’s just too bad that the music tends to undermine it. You have a perfectly unsettling scene, but then this rock starts playing in the background, totally destroying the mood. I felt the director tried a bit too hard to combine action and horror when it came to the score, when he should’ve just went with horror- since that was the main focus anyway. 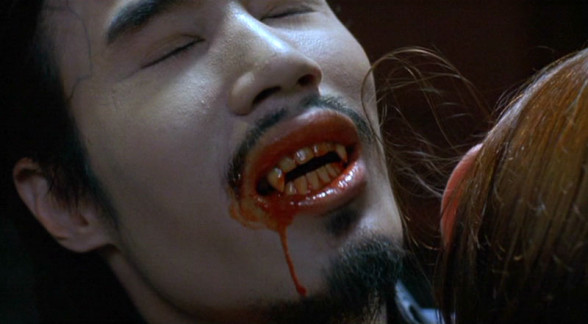 The script isn’t as bad as a lot of its kind, but I can’t call it good either. I think this ties into the lack of budget, because I can see what the writers are going for. Their story might’ve been much more moving on paper, but much of the substance is just skimmed through. Example, the arc of the story is ‘what will our hero do in order to save his love?’. That’s fine, but that loses much of its impact when Connor starts to develop feelings towards Sang (Stephanie Chao), which culminates into a sex scene. So while his true love is being tortured, he’s getting laid…Why should I care about these people again? Perhaps there was supposed to be more of a conflict there, that Sang (even though she’s not a villain) sort of represents the seductive allure of vampirism and how easy it is to get lost in it, but it’s handled very poorly. The whole vampire slayers subplot felt tacked on as well, taking away from the primary conflict while adding little. It’s also easy to tell where that bit is going. The characters are incredibly inconsistent, refusing to help our protagonist, then rescuing him, then suggesting they might help him, but then refusing him again, to suddenly deciding to help him…Jesus…Yet despite these flaws, I never found the writing to be awful. The dialogue is okay, the characters are kind of interesting, the plot does have a nice flow and it allows plenty of room for action and horror, with none of it ever coming across as gratuitous (in my opinion). I can see a cool story here, but either the writer wasn’t able to express it, the director wasn’t able to tell it, or they just didn’t have enough money to fully realize it.

“Vampires: The Turning” is not what I’d call a good movie, but it does have enough moments to where I found myself liking it. It successfully combined martial arts and horror by providing plenty to chew on for fans of both genres. When it works as a horror film, I was impressed. When it works as a martial arts film, I was impressed and I’d say it worked as either at least 50% of the time. When it failed, I could usually understand why it failed and would sympathize with the movie. It might not be as good as the more famous martial arts/vampire movie, “Blade” or “Blade 2“, but it much more firmly placed within the horror genre. And it’s better than “Blade 3“. Above everything, it gave me everything I wanted out of it, even if it is very rough around the edges and in some ways even crummy.

Nudity: There is an extended sex scene and breasts are visible.

Overall: “Vampires: The Turning” is a pretty entertaining combination of kickboxing and vampires, even if it is certainly a B-movie. But most viewers don’t seem to be as generous as I am, so keep that in mind if you choose to view it.