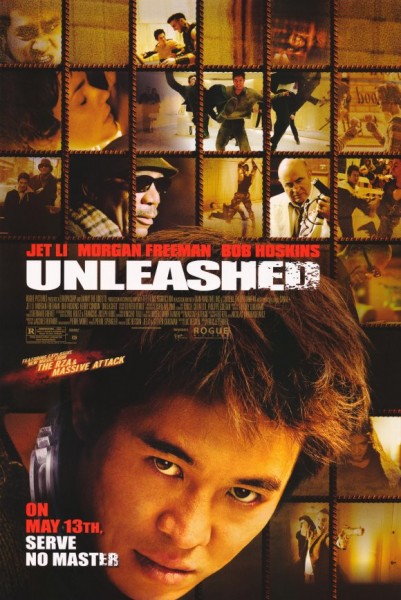 Plot: Danny (Jet Li) has been raised by Bart (Bob Hoskins) to literally be his attack dog. He’s treated like an animal, acts like an animal and fights like an animal. But when Danny wanders away when Bart is critically injured, he comes across a blind man (Morgan Freeman) who takes him in. Danny starts learning how to be human, but when Bart recovers, he’s going to want his dog back and blood will be shed.

“Unleashed” has a special place in my heart because it’s one of the few successful examples of a martial arts movie reaching out to a different crowd and satisfying everyone in the process. It delivers great action, compelling characters, an intriguing story, inventive martial arts choreography and excellent performances by respectable actors. I remember always getting annoyed when people would mock Jet Li’s acting abilities, ignoring that he’s speaking a second language and how his kung fu skills were being westernized. “Romeo Must Die“, “Cradle 2 the Grave“, “Kiss of the Dragon” and “The One” weren’t designed to show off his ability to emote or deliver dialogue. They were intended to showcase NOTHING but a lot of martial arts action, which at least they (usually) succeeded in doing. Yet critics and general audiences complained about his lack of range, because apparently they don’t like ‘reading’ subtitles. If they did, they’d check out his more respectable Hong Kong works and realize that he can do more than kick and punch. Ironically, even “Hero“- which was successful in the west despite being made in the East- showcased the more emotionless Jet Li that western audiences were used to. But “Unleashed” changed peoples perceptions of him, conceding that he can really act when given the opportunity to do so…and beat the unholy shit out of his enemies…What else can you ask for in a movie star?

I almost regret that “Unleashed” wasn’t about Bart and Danny climbing through the ranks of underground death matches because the set-up was just so awesome. The opening act contains a lot of action, with Danny more-or-less moving from one location to another in order to beat people to death- although characters do talk on the way to the next action set piece. Reviewers often point out that the fighting is more raw and based purely around his speed, strength and aggression instead of martial arts technique. Those claims are true, but can also be misleading without elaboration. He doesn’t use any stances or forms, but the choreography is just as detailed as it would be in a normal Jet Li flick. The flow of the movements is still fast and the stunts are just as intense. I found the fight scenes to be incredibly exciting for the same reasons I’d find any Jet Li fight scene to be exciting, but “Unleashed” provided a different flavor that I thought was just as appealing. Plus, damn this movie was brutal. Every punch left me cringing, although the little touches make various confrontations hurt even more. Did anyone notice the barb wire that Danny was being pushed into during the pit brawl? Ouch! The finale takes the stuntwork and choreography even farther, while providing a worthier opponent for Jet Li to take on. But back to what I had originally hoped for: I really enjoyed the bantering between Bart and his minions. Bob Hoskins is awesome as the villain, balancing total monster with troubled father figure. He’s definitely the true antagonist, yet you do get a smug satisfaction out of watching him trash lesser villains. He might be evil, but he sure is charming and he has chemistry with everyone he shares the screen with. When it seemed like the plot was heading towards the traditional death match scenario, I was totally down for it…Then the combined efforts of a semi-truck and machine guns destroyed that possibility. Not too long ago I reviewed “Dragon Tiger Gate” with Donnie Yen and complained how the movie let down its strong opening act…Does “Unleash” suffer from the same fate? 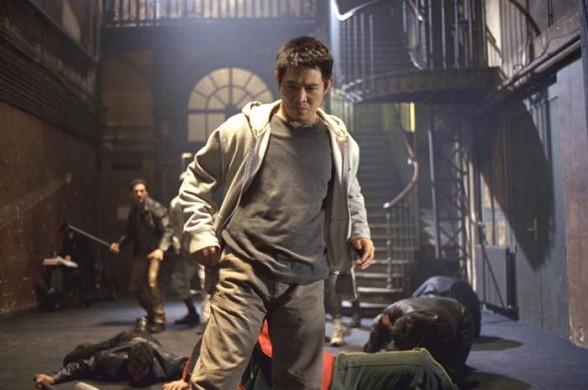 No…I already made it clear that this would be a positive review. The second act is mostly devoid of action, with the only exception arguably belonging to the third act. Even 10 years ago when I was much less patient than I am now, this didn’t bother me. The middle section seems significantly shorter compared to most second acts, but it’s not really rushed, nor does it waste anytime. It’s about Danny rediscovering his humanity and the cast elevates it. Morgan Freeman (Sam) is very inspiring as his mentor and Kerry Condon was sweet as Victoria. Victoria actually really made me nervous when she was first introduced, because she is the type of character that usually provides headaches for us viewers. The trailers didn’t do her any favors either. But I found her interactions with Danny and Sam to be very charming. Jet Li’s fish out of water moments are very funny, but there is an underlining tragedy to a lot of these sequences as you realize that he has never really had a life before. Jet Li is perfect in this role. He doesn’t speak a lot, but he makes his few lines count and his body language sells the rest. Bob Hoskins and Morgan Freeman are no strangers to phoning it in, but they obviously took this movie seriously and they elevate their characters beyond archetypes. Yet they also never steal the show from Jet Li either. Everyone compliments each-other. But even when there is no fighting, I am either laughing with the movie or wiping a tear away. It always kept me invested, even when the flaws were noticeable.

The romance was very…awkward. I’m a little wierded out by how Jet Li’s western films are reluctant to follow through with the love stories. You could easily interpret his relationships as platonic and I can’t help but wonder if they’re doing this because of his race. Is it really so strange seeing an Asian dude kiss a white (or black) woman? That’s a little racist, but there are other reasons for THIS romance to creep you out. Jet Li has the mind of a child, but has the body of a middle aged man, so should not hook up with a teenaged girl. In the films defense, he doesn’t. But they have an ‘almost kiss’ moment, so romantic love is implied…I’m still trying to figure out who the pervert would be in that relationship. I don’t think they should’ve bothered with that subtext. It would’ve made more sense to confirm the relationship as more of a brother-sister thing…without any incest… Speaking of unresolved and ambiguous, what happened to Bart’s henchman during the ending? I don’t think he’d be willing to let them go… I also kind of wanted to see Bart get revenge on the guy who attacked him as I’d presume such an action would not be forgiven. These loose ends don’t bother me too much because “Unleashed” had a perfect running-time and adding more might’ve thrown out the pacing…They’re still flaws, but nothing I can’t forgive. “Unleashed” succeeds on a story and character level- boosted by awesome performances- so normal critics were able to enjoy it. The action sequences were phenomenal, so martial arts fanboys were able to enjoy it. Jet Li gained credibility in the west as an actor, so I presumed he enjoyed it too. Everyone is happy and I am likely the happiest…because I’ve having a good movie dry spell as of late…Seriously, my last eight reviews were negative and I SERIOUSLY needed this. I just wish it had a better title. While “Unleashed” makes sense, it’s sort of bland and I think “Danny the Dog” (which I believe is the International title) is a more memorable name.

Nudity: There is a pointless bit with a naked woman in the shower and some sexuality in general, although not enough to make it awkward watching with your parents.