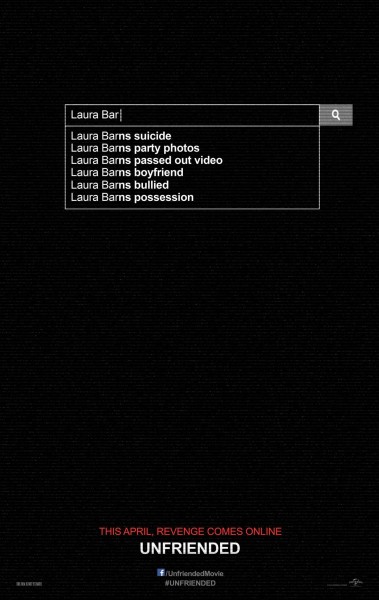 Plot: A group of friends are harassed in an online chat by a vengeful ghost.

When I first saw the trailer for “Unfriended“, I simultaneously laughed, jeered and raged- which must have been a very confusing experience for those around me. Was this the same preview which drew so many positive responses that they chose to elevate it from a ‘direct-to-TV’ feature to a theatrical release? Because it looked funny, stupid and annoying, but never scary. The only ‘fear’ I felt was the approaching doom known as its release date. When the critics actually seemed to like this movie, my immediate thought was: Did they accidentally walk into “It Follows“? But reading said reviews, they did correctly describe the premise of “Unfriended“, so that couldn’t be the case. How did this piece of shit trick audiences into thinking that it was ‘scary’? My hatred was so intense that I didn’t really consider that the entire horror genre is an illusion, designed to ‘trick’ viewers into being afraid. Nor did I consider that just because something looks ass retarded, it doesn’t necessarily mean it will be. I mean, don’t get me wrong…”Unfriended” is pretty f@cking stupid, but not as f@cking stupid as the trailers suggested it would be. The gimmick might cause eye rolling, but it is utilized reasonably well and I never grew impatient or disinterested. Yet how can anyone find this scary? The trailers spoil the majority of the kills, the characters are too unpleasant for you to fear for them and the tone rapidly alternates between disturbing and goofy. I can understand if someone enjoys the movie, but I don’t get how “Unfriended” has scared anyone.

The gimmick of being from the POV of a Computer Desktop- mostly involving skype- was the main selling point…Although I can’t decide whether it was used to sell you on why you should watch the movie or why you should actively avoid it, as I thought this idea sounded awful. During the first 15 minutes or so, it was getting on my nerves. Characters would talk (over each-other) while someone checks out facebook or another website, which made it difficult for me to pay attention to everything that was going on. I use skype and am aware of the notification bleeps, but “Unfriended” used them way too much. I disliked the lag too, even though that was pretty realistic. Yet over time, I got used to it and didn’t mind all of the eccentricities that the gimmick provided. As much as I hate to concede this point, the ‘Computer POV’ is a unique spin on an old formula and the idea alone will likely burrow itself into my memory. Do you think anyone would remember “Unfriended” if it was a traditional ‘found footage’ story? Nope! I have to give credit to the filmmakers for using the gimmick to explore the heroine’s characterization. She’ll type something, but change her mind delete her words and say something else instead. The awkward pauses between the finishing of a sentence and clicking the ‘send’ button says volumes about her, so that was nice. Of course, the downside to this gimmick is that the potential for scares are limited. There isn’t going to be any variety amongst the locations, nor is there enough room within the webcam frame for creepy imagery. “Unfriended” also sometimes finds itself in corners in regards to the story and its solutions for climbing out are pretty dumb. They do explain why they don’t just turn off skype or shut down the computer, but the Chat Roulette segment was a waste of time. Why would Blaire think that would work? There are easier ways of contacting the police, even if it’s screaming out the window for help, but perhaps that was just product placement. Or filler. 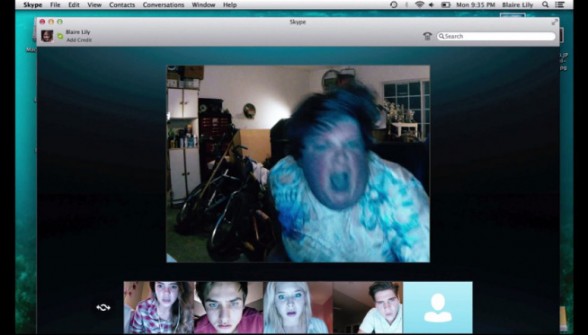 But “Unfriended” was pretty swiftly paced. After a slow start, it begins to pick up momentum and never runs out of steam- probably because of the short running time. Even when the narrative was padded out, the fillery scenes at least have a sense of urgency about them. I thought it was interesting seeing the characters react to the ghost, try to mount their own defensive measures and eventually turn on each-other. Even when something dumb was occurring, I was always invested. The long takes mostly enhanced the claustrophobia and the actors completely sold me on their delivery. I wish I could’ve liked the characters, but unfortunately “Unfriended” doesn’t seem to want me to sympathize with any of them. They are all bad people who helped drive someone to suicide and don’t appear to feel any remorse. They’re noisy, constantly yelling at each-other and never taking responsibility for their actions. You might think that this is the point, but was the suicide victim any better? If we were supposed to feel cathartic when they die, shouldn’t we have been able to relate to the original victim? Instead of a nerd or an average teen, she is presented as an attractive wild girl who is described as a bitch in her own right. So…who are we supposed to root for? I know “Unfriended” is making a statement about bullying, but this thematic material is hard to take seriously because the characters are so dumb. Why do they think they can lie to a ghost who has has already demonstrated omniscience? This is plot induced stupidity that wouldn’t be found within a real person, but is prominent amongst movie caricatures. Even when a character is revealed to be the total opposite of their cliche, it doesn’t make them any more human. If anything, they’re a stereotype masquerading as another stereotype!

The trailer spoils a lot, from important story twists to character deaths, but they aren’t any more effective within the context of the film. The blender sequence looks just as silly as it does in the previews. The director doesn’t allow his audience to make any real connection with the death sequences, as they’re too over-the-top to be tragic, but not gory enough to be campy. Every death is immediately followed by a severe case of mood whiplash, which comes in the form of light hearted music, a sex chat pop-up or a forced meme. Was this supposed to be funny? Every time the tone shifts like this, it undermines the terror I’m supposed to feel! “Unfriended” fails as a horror flick and as ‘anti-bullying’ propaganda, but I will concede that I was mildly entertained. I believe the writer was trying to make a subversive film, but none of the writing stands out because most of the twists are spoiled in the trailer and even the ones that weren’t were pretty obvious. The gimmick overshadows everything- the flaws and strengths alike, but I will remember it long after I’ve forgotten better horror films. I’d say it’s closer to mediocre than bad or good though…My anger was unjustified in the end, but I hope this gimmick doesn’t become a trend.

Note- If they felt any guilt, why did they never take the video down after the suicide? Why couldn’t they at least have changed the name? Maybe it had been re-uploaded by someone else, but why would youtube allow that? This is the kind of stuff that strips away any feeling of authenticity that the movie seriously needed.

Violence: Rated R. There is some, but not enough. The most graphic part is when a passed out character shits themselves.

Nudity: Nothing explicit, but there is a fair amount of sexuality.

Overall: “Unfriended” didn’t piss me off and was sometimes even fun, but it’s not scary or especially smart.