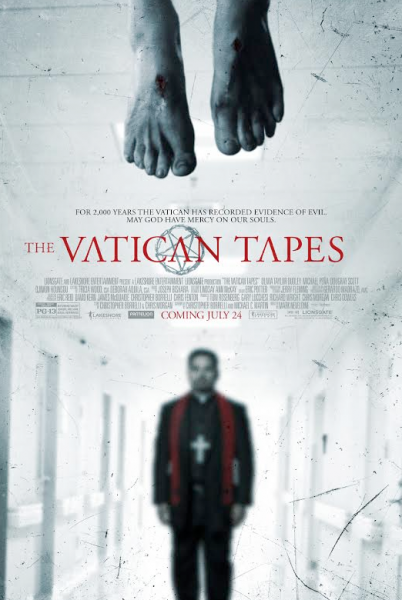 Plot: Father Lozano (Michael Peña) begins to suspect that Angela (Olivia Taylor Dudley) is being possessed by…something, but when he recruits two Vatican experts, he realizes that the truth is far more horrifying than ever imagined…I want to stress that this is the plot summary, not my opinion of…anything surrounding “The Vatican Tapes“.

“The Vatican Tapes” was one of those named in that infamous list of high quality unmade scripts, which were passed over because they weren’t marketable enough. The blacklist was given enough exposure that filmmakers began to take chances and convert them into full fledged films, although I don’t believe any of the final products have been unanimously praised- let it be known that I personally enjoyed “Abraham Lincoln: Vampire Hunter” though. I’m not going to pretend that I know the original content within the screenplay for “The Vatican Tapes“, but now that I’ve seen the movie, I suspect that it was tampered to become more ‘marketable’. Which in this case, is another word for ‘ordinary’. Every once in awhile hope would fill my heart as an interesting idea threatens to develop into an intriguing story, but I’d deflate almost immediately because the narrative seems more interested in the conventional exorcism storyline. My problem with this subgenre of horror is that these movies feed off of the cliches created by “The Exorcist“, even though these cliches grew moldy a long time ago. “The Rite” and “Deliver Us From Evil” weren’t well received and had their flaws, but I respected them for trying something different with the old formula. I do feel like “The Vatican Tapes” had similar aspirations, but the scenes which could’ve given it a more unique identity ended up being omitted so they could focus on the shit that we’ve seen a million times before.. I’m only speculating, but I suppose it does not matter because “The Vatican Tapes” is…just…there. It transcends both ‘good’ and ‘bad’, being the reason why the term ‘mediocre’ exists. I feel like I’ve seen it before in the form of every other possession movie.

Part of the reason why I suspect that the script had been tampered surrounds the character writing. A lot of information will be brought up, but the pay-off will be minimal. Lozano was a military man who ‘saw too much’ and became a Priest, so you’d think that this is setting up an angle where the demon reveals some past war crime he participated in or witnessed, but it never goes anywhere. In fact, while Lozano is a prominent character, he is…just…there. It’s distressing seeing Michael Peña look so bored, as he stole the show in the recently released “Ant-Man“, but his character has no personality. I think he’s supposed to be the audience surrogate, but then why is Pete (John Patrick Amedori) there? He’s Angela’s boyfriend and he more firmly fits the definition of audience surrogate, so I just think it’s weak writing. Speaking of which, Angela and Pete have a scene where she forces him to promise that he’ll be ‘there for her’, because she knows something terrible is coming. I thought Pete would somehow try to sabotage the exorcism or be the one who saves her soul, but he merely becomes a bystander during the finale. Why introduce the tension between him and Roger (Dougray Scott)- her Father- if that never leads anywhere? There’s no blowup or reconciliation. This doesn’t lead to character development or a plot point, it’s simply wasted material. Djimon Hounsou is also wasted as one of the experts and he only seems to be present for a sequel hook. Michael Paré cameos as a detective, but he’s practically a red herring because the police investigation angle is dropped before it even begins. Cardinal Bruun (Peter Andersson) was a strange character because throughout the climactic exorcism, I kept thinking that he was enjoying this too much. The conflict between him and Lozano was intriguing in concept- Bruun thinks they have to destroy Angela, Lozano wants to save her- but this lead to a gaping hole in logic. Everyone is constantly quoting the book of revelations, but no one seems to consider how the Anti-Christ is created WHEN HE/SHE IS MORTALLY WOUNDED OR KILLED. It’s implied that Bruun has a more personal vendetta, but it’s just another wasted idea. As for Angela, she’s a generic possession victim. The actress portraying her does good, but we don’t get to know the character very long before she starts acting strange. She’s described as ‘perfect’ and believe it or not, there is a pay-off to that claim. It’s just so blandly executed that I couldn’t bring myself to care. I can’t talk about this too much without going into spoilers, but this films interpretation of the Anti-Christ is pretty cool and yet it somehow gets devoured by your conventional Exorcism story. “The Vatican Tapes” narrows its more compelling ideas in single scenes or sentences, when they should’ve embodied the narrative as a whole.

“The Vatican Tapes” isn’t scary, partially because the filmmakers recycle scare tactics employed by most Exorcism flicks. Do contortionists scare you? Do demonic faces scare you? Does that distorted voice speaking in another language scare you? I wasn’t very fond of the visual style, even though I will give Neveldine props for experimenting. The cinematography is very polished and the lighting is bright, but this only serves to soften the horror. The almost angelic light surrounding the demonic Angela is…different, I guess…but it’s not scary, creepy or intense. The security footage in particular just feels too digital, which undermines the realism that these kinds of scenes go for. There are some good shots and I admire the attempt at making daylight scary, but “The Vatican Tapes” failed to do anything for me as a horror flick. Even the jump scares seemed limp and insignificant. It’s not gory, frightening or even suspenseful, although the pacing is relatively quick. To be honest, I didn’t leave the theater disappointed, angry or bitter, because I didn’t think “The Vatican Tapes” was terrible. When the end credits rolled, my first thought was: “At least it wasn’t “Pixels”“. But it is just another Exorcism flick and we don’t need anymore of those. We haven’t needed anymore of those IN YEARS.

Violence: PG-13, most of it being implied.

Overall: “The Vatican Tapes” is more mediocre than bad, but why watch it when you can see any other Exorcism flick?