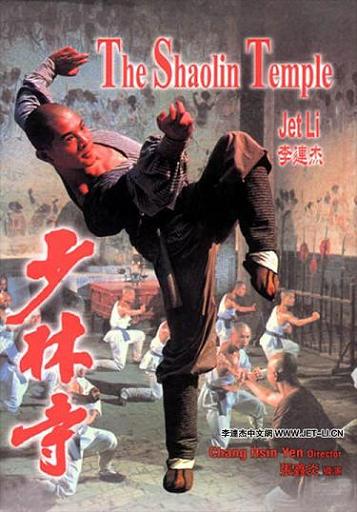 Plot: War rages throughout China and this results in Chieh (Jet Li) and his Father becoming slaves. When his Father rebels and is killed, Chieh swears vengeance. He joins the Shaolin Temple to learn martial arts. But will his quest for revenge bring destruction upon the Monks?

“The Shaolin Temple” is quite possibly the best Shaolin movie that I’ve ever seen. The film marked the debut of Jet Li, but despite this, it isn’t the easiest movie to find. Perhaps this is because it shares the exact same plot as 99.9% of the other Shaolin Temple features. The story of a youngster who joins the temple in order to learn kung fu to avenge his loved one, but finds a spiritual journey along the way is the conventional formula of Shaolin movies. Even by the time “The Shaolin Temple” was produced, the concept had become tired. I imagine many will dismiss this for that reason alone, or at least be reserved in their praise of the film. Yet the execution of the overused material is what breathes life into it. Plus, who watches kung fu movies for the story anyway?

Jet Li apparently injured his back during the making of “Once Upon a Time in China” and never fully recovered, which effected his ability to pull off fight scenes. Now think about that for a moment. That movie was made in 1991 and Li CONTINUED to display some of the best Wushu skills in front of the screen. This was almost 10 years prior to that, when Li was in perfect condition. I thought Li was amazing in “Fearless” (14 years after that?), but he moves so freakishly fast here that you’re surprised you can keep up. But the camera does manage to capture all of his movements, so you can see all of the technique despite the fact that Li is so quick. Perhaps even more impressively, you can almost feel the power behind every punch and kick. Usually in Kung Fu features, the filmmakers have to choose what they want to display. Do they want to show off the authenticity of the techniques? If so, the movements will look sort of stiff and sluggish. Do they want to emphasize the fighters speed? When that option is chosen, the techniques will look sloppy and the punches will seem soft. What about sheer power? While sound effects often give the illusion that the blows are hitting, sometimes it backfires and makes the lighter punches seem even more phoney. It isn’t difficult to fake a powerful attack, yet it’s usually done at the expense of speed. “The Shaolin Temple” mastered all of the above. The techniques are precise, but the fighters are fast and every blow looks like it hurts. While this movie won’t win any awards for acting, everyone does a good job at looking like they really want to beat up the enemy. So when they strike them, it seems more genuine that way. The choreography in general is top notch and it seems to get better as the movie moves along, but it’s the way that each movement is delivered that makes it stand out.

But believe it or not, I actually thought the Taolu was even more impressive! Taolu is apparently the Chinese equivalent of Kata, where the martial artists will practice a set of moves in place. I don’t know why, but Kata and Taolu has never really translated to film very well. It always looks goofy and is usually boring to watch. But not here, where all of the fighters show off some mad skills (in unison) while merely practicing the techniques. Once again, everything looks so fast, powerful and precise. I don’t know how much of Wushu is for show, but I wouldn’t want to take these guys on. The practice scenes are boosted by the gorgeous scenery. Sometimes it looks like they’re on a set, or in front of a matte painting. But it’s aesthetically appealing and the cinematography milks the locations for all they are worth. One of my favorite scenes is the training montage, where Jet Li is training as the seasons move by. It’s breathtaking!

“The Shaolin Temple” also gave me characters whom I enjoyed following. Chieh’s journey is a conflicted and compelling one, but you always understand why feels the way he does. The love interest, Bai (Lan Ding) is very charming and cute. His teacher (Hai Yu) is endearing and the interactions between all of these characters are a lot of fun. I also appreciated its outlook on religion. It acknowledges that it can help people find internal peace and boost the need for morality. Yet it also can be bound by dogma which is counterproductive. The Teacher represents someone who embraces the good, but discards the bad about religion. Another higher-up represents the hypocritical side of religion (although he’s not portrayed as a bad person either) and the head Abbott has both positive and negative traits. He uses his beliefs as a force for benevolence, avoiding violence while helping others, but he’s also out of touch with the rest of the world. It has been said that “The Shaolin Temple” has some communist propaganda, but I personally didn’t see anything of the sort. I saw “The Shaolin Temple” as a neutral outlook on religion in general, focusing on the positive and negative attributes that come with it.

But that Is only if you want to read between the lines. For the most part, “The Shaolin Temple” only desires to showcase the exceptional abilities of the martial artists involved with the production. Even though Jet Li became the big name, everyone is JUST as good and the fight scenes are diverse. You have one vs one duels, one against many brawls, many against many battles and the director is sure to utilize medium shots and wide shots alike in order to capture how epic everything is. Every scene seems immaculately framed, from the positions of the actors to to the sets to the props. There isn’t a wasted shot. This is also one of the few occasions where the Hong Kong comedy made me laugh. This brings me to the ‘tone’. Many will be startled at the sudden transitions from lighthearted to visceral. This is one of Hong Kong cinema’s many eccentric traits and usually I consider it a fault. For some strange reason though, I really dug it here. It made the experience both entertaining yet intense. I could sit back and enjoy the ride, but also wonder where in the hell the movie would go. So this is one of the few features that balanced the yin and yang, much to my delight.

Are there any problems beyond the familiar story? I can see some viewers complaining about the animal cruelty. I don’t know if any of the animal slayings were real, but it is hard to watch the sheep get butchered by the villains. Yet it’s also kind of funny how Chieh accidentally kills (and eats) the dog of his love interest and that is the beginning of their relationship. I did find some of the editing to be crude, but it’s inconsistent and it might’ve been the transfer. The subtitles were very awkward too, with peoples dialogue being combined with other characters lines. But I thought the movie itself was fantastic. It’s beautifully directed, surprisingly well written and the bulk of the running time is dedicated to showing off the superb kung fu of the Shaolin Monks. It remains one of Jet Li’s finest films. Most consider “The 36th Chamber of Shaolin” to be the definitive Shaolin movie, but I consider “The Shaolin Temple” to be vastly superior.

Nudity: There is an attempted rape, but nothing comes from it.

Overall: “The Shaolin Temple” is a must see for fans of martial arts, kung fu- especially when its Shaolin oriented- or Jet Li. I was blown away!