Yay, it’s finally here! I’ve been on a “Tremors” binge lately, but while I dutifully watched “Tremors 3” and “Tremors 4“, my eye was always on “Tremors 5“. Why? Um, because I hadn’t seen it yet…and now I have. But if I’m such a fan, why did it take me a full year before a “Tremors 5” copy mated with my DVD player? Um, because of the deterioration of quality in the franchise. I didn’t like the crappy CGI, the silly tone, clunky pacing or made-for-TV aesthetics of its immediate predecessors, so the last good sequel for me was “Tremors 2“- which at least captured the spirit of the first, even if at a reduced rate. But I was gifted a “Tremors” Blu-Ray disk and watching it inspired a passion in my loins, so I decided to cover the franchise and explore virgin Graboid territory. I’m glad I did, as I was able to reconcile with the latter sequels and get along with the new addition to the family. “Tremors 5” is actually a decent sequel, which might sound like an impossible sentence to form after you discover that Jamie Kennedy and the guy who directed “Lake Placid: The Final Chapter“, “Who’s Your Caddy?“, “Kindergarten Cop 2“, “Sniper: Legacy“, “Sniper: Ghost Shooter“, “Jarhead 2: They’ll Make A Sequel Out Of Anything” are both involved, yet it is. I was occasionally impressed and sometimes disappointed, but more importantly, I was consistently entertained.

“Tremors 5” tones down the comedy and favors…*sniffles*…horror? And action? Whilestillretainingasenseofhumor? Sorry for becoming so emotional, but a “Tremors” sequel balancing thrills with laughs just brings a tear to my eye. I MISSED THIS KIND OF TONE SO MUCH!!! I CAN ALMOST FORGIVE THAT THE SCARES AND JOKES AREN’T REALLY THAT GOOD- aw, really? Well, there goes my boner. Actually, I was impressed with how well Director Don Michael Paul built up the suspense. When a character is being stalked, I felt the hairs raise on the back of my neck and I grew still, anticipating the potential attack. I liked how the director would unveil the new monsters, making their introductions more memorable. Paul crafts some pretty cool visuals with his use of slow motion, lighting and ambitious framing. His direction is surprisingly stellar, considering that his greatest contribution to cinema up until this point was “Half Past Dead“, which caused Steven Seagals’ career to become half past dead. The production values must’ve been beefed up too, as the African setting was utilized just enough and there is a variety amongst the locations. Oh yeah, the special effects are actually really good, even though this is a direct-to-DVD flick and the monsters are brought to life via CGI. Despite the limited production values, the CGI looked pretty damn convincing and the new creature designs were awesome. It turns out that African Graboids are much different than Nevadan Graboids, which is a twist I personally like because it means the formula is less likely to become stale. These Graboids are bigger and have their own arsenal of abilities not found in previous incarnations, so you never know what to expect from them. The Ass-blasters seem to be more prominent this time around, but I liked how they were upgraded as well. “Tremors 5” managed to make me take Ass-blasters seriously, even though they’re called Ass-blasters, which is a very impressive accomplishment. Unfortunately, some of the attacks are a little on the lame side. The money shot of the Graboid jumping out of the ground is cool at first, but they keep re-using the visual, lessening its overall impact. They probably should’ve only had it emerge like that once or twice, with the remainder of its kills focusing on the victims being pulled underground. The shower attack was more awkward than frightening due to some disjointed editing and one segment blatantly steals from “Jurassic Park“. I’m sure the filmmakers would claim they’re homaging Spielbergs’ masterpiece, but it’s so identical that it becomes difficult ‘not’ to compare the two and Mr. “Guy who’s about to direct Death Race 4” is certainly no Mr. Spielberg. There is a lot of action though and even if the chases, explosions and gun-fire aren’t as exciting as the equivalents from “Tremors” or even “Tremors 2“, they still provide a good amount of fun. 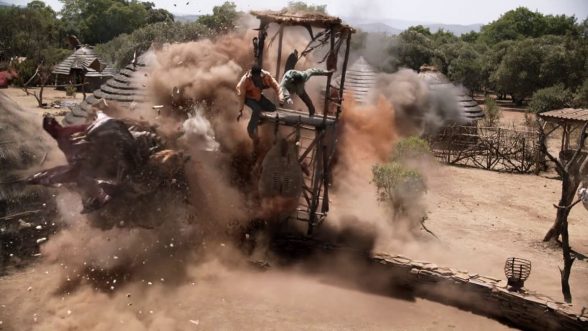 I thought “Tremors 5” was funnier than “Tremors 4“, but “Tremors 3” had a few more gold nuggets of humor. There are some really good lines (loved the reference to Heather) and Michael Gross continues to be committed in his role. His articulation is funny, primarily because the character of Burt takes everything so seriously. The scene where he’s trapped in a cage works just because of Gross’s mad acting skills. I can’t say I liked Jamie Kennedy, but he wasn’t as annoying as I thought he’d be. His lingo was awkward and already feels dated, but he balances groan inducing references to Twitter and Starbucks with some genuine moments of pathos. Kennedy doesn’t turn in a bad performance, but I sometimes felt he was miscast. The character describes his videographer expertise and my immediate thought was “he’s lying“, because he didn’t sound very convincing, but apparently he was supposed to be telling the truth. There is also too much toilet humor, with three urination gags occurring back-to-back. This is the first “Tremors” movie that didn’t involve S.S. Wilson or Brent Maddock in some capacity and while I think the franchise needed new blood, I found myself missing the quirkiness of their scripts. The supporting cast here are pretty bland, primarily because the narrative keeps restricting their potential. A little time will be spent on a character, but just as they start to become interesting, they’ll die. There are two groups of characters, with one being more prominent during the first half, but they don’t last long enough to make it to the second half of “Tremors 5“. So characters who barely stood out at all early on are suddenly given the spotlight, but by then it’s too late for me to really care about them. Wilson and Maddock might’ve had their own shortcomings and I disagreed with where they ultimately took the franchise, but they knew how to develop ‘attention grabbing’ characterizations. “Tremors 5” just has stock horror flick characters and it’s pretty easy to tell who will survive or perish. There are some really good call-backs to the previous movies, but I was upset with a scene where Burt indirectly kills someone. He doesn’t even react to their death and even though said victim was intended to be an asshole, Burt is usually sensitive about the people dying around him. “Tremors 3” even had a moment where he expresses regret for the death of an obstructive, douchebag, Government flunky. This is just me being a stuffy fan though, as I think casual viewers will find the scene-in-question amusing.

“Tremors 5” is the type of sequel that might catch you off guard, because few franchises get this far and retain any level of respectability…much less restore credibility to one after the previous 2 sequels hurt the name value. More time and money were put into the production and the filmmakers tried their best to recreate the appeal of the original- with at least some success. It’s interesting considering how this parallels and contrasts with the other sequels, primarily the previous two. “Tremors 3” was fast paced, but had sloppy direction that collapsed underneath the terrible effects. “Tremors 4” was technically superior, showcasing better effects and direction, but struggled with clunky pacing. It had put all of its resources into a handful of exceptional scenes, giving them more power, while “Tremors 3” spread its budget throughout the entire runningtime- which is probably why it looks so cheap. “Tremors 5” is just as action packed as “Tremors 3“, but consistently maintains a degree of quality all the way through, combining the strengths of both. I still think “Tremors 2” is a superior sequel, simply because it’s funnier and scarier, but this is a step in the right direction for the franchise. Yet there are problems and I do wish Wilson and Maddock maintained SOME involvement, as you ‘can’ argue that this is inferior to the other sequels because it lacks the eccentric personalities of ALL FOUR of its predecessors. Part of me even fears that in a few years, “Tremors 4” and even “Tremors 3” will have sturdier places within my memory. “Tremors 5” just isn’t quirky enough to stand out as memorable, so as much as I do bash the previous two, they do deservedly hold special places in the hearts of us fans. But I also think it’s the best and most entertaining of the latter sequels and I hope “Tremors 6” continues this upward climb.

Violence: PG-13, much grislier than its predecessors.

Overall: “Tremors 5: Bloodlines” isn’t perfect, but it is the best sequel since “Tremors 2“.