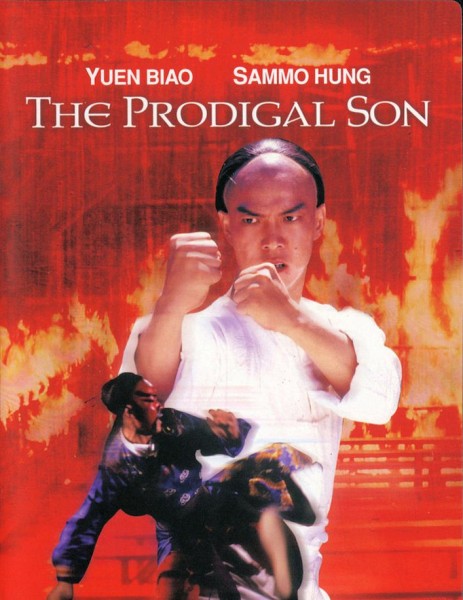 Plot: Leung Chang (Biao Yuen) has been conned by false teachers into thinking he has legit fighting skills. When he’s defeated by a real master, Yee-Tai (Ching-Ying Lam), he begs to become his pupil. Despite being (continuously) turned down, Chang doesn’t give up but conflict is about to force Yee-Tai’s hand.

“The Prodigal Son” has been lauded as one of the greatest kung fu films of the 80’s, easily being one of the finest works of both Sammo Hung and Biao Yuen. I guess I can see why fans would adore it so much, as it has a lot of talent behind and in front of the camera, superb martial arts choreography, a clever- if noisy- sense of humor and a few unique story elements. It has everything required to make a kung fu classic, but I can’t say I’m in love with it myself. Don’t get me wrong, “The Prodigal Son” is a solid kung fu film. At times, it’s even exceptional. But its sloppy structure keeps it from being golden. Although there isn’t anything wrong with silver!

“The Prodigal Son” can be kind of frustrating because the story is so disjointed. The initial set-up is fine. Chang is conned into thinking he is a badass, but when he’s brought down a few pegs by the master with the ambiguous sexual orientation, he desires to learn from him. A large chunk of the film is dedicated to Chang just trying to get on his good side. I personally felt Yee-tai waited too long to train Chang, as Chang’s sudden mastery came across as forced and it reduced the screen-time of Wong Wah-bo (Sammo Hung). Eventually, Yee-Tai’s skills catch the attention of Lord Ngai Fai (Freddie Chan), who is an interesting parallel to Chang. Both of their Fathers encouraged the servants to rig their matches. The difference is Chang’s opponents were bought off while Ngai’s opponents were killed off. Also, Ngai is a genuinely skilled fighter. This leads to a tragedy which did shock me, but in true Sammo Hung fashion, the drama is immediately followed by…Sammo Hung goofing around, providing the films most successful comedic relief. Ah, Sammo. You really do love your whip-lashing moods, don’t you? At least slapstick comedy doesn’t follow a rape scene though, so that’s something.

But allow me to interrupt myself with a praise. As messy as the script can be, I did think the writers did a spectacular job of creating interesting characters. Yee-Tai is much different than what was becoming the cliché for eccentric masters. Usually they’re expy’s of the dude from “The Drunken Master”, but Yee-Tai is a troupe performer who might be gay. Granted, performing as a woman doesn’t mean anything, but his brother does refer to him as a ‘fag’ and there is a lot of homoerotic tension between Chang and him. Either way, that doesn’t dominate his personality. He’s actually a wise, compassionate and flawed character who stole the show for many viewers. I also liked how Ngai is portrayed as a ruthless fighter, but he isn’t a total monster. He has no idea what his underlings were doing and is horrified when he finds out. Furthermore, unlike “The Magnificent Butcher”, where the villain is manipulated but is treated like the villain until the very end, “The Prodigal Son” gives a better send-off to that character. Personally, my favorite was Sammo Hung’s Wong Wah-bo simply because he cracked me up the most. Ugh, he and Yee-Tai had such an interesting dynamic that I must return to my previous criticism.

Wong Wah-bo shows up around the half way point, revealed to be Yee-Tai’s brother (it’s never clear whether they’re brothers by blood or by kung fu) and they are constantly bickering and teach Chang in different ways. Besides showcasing some highly useful martial arts philosophy, the highlight is seeing their differences in training. This was so intriguing that I wish more of the movie was about it! But suddenly it’s as if the writers realized they had to wrap things up in about 10 minutes, so Wong Wah-bo is unceremoniously removed from the story- with Yee-Tai quickly following in the most anti-climactic way possible. Then the story becomes about Chang fighting Ngai which would be fine if they had more interactions. They are so similar and yet so different that these possibilities begged for more screen-time between the two, but Ngai’s story revolves around Yee-Tai and Chang is merely an afterthought. “The Prodigal Son” contained three different stories- all of which were interesting- but all of which were also underdeveloped because of how they were used.

But this is a Kung fu movie so…WHO CARES!? Except…me….sadface…seriously, the stuntwork and choreography are amazing, sometimes even gratuitously so. Everyone is wildly acrobatic and we marvel at how they can balance on certain things or how far they can jump flip. The filmmakers even incorporate what had to be some insanely dangerous gimmicks to the sets in order to magnify their effect. Characters don’t just flip. They flip over a large flag (?) which is on FIRE! One amusing moment is when Sammo Hung gets to demonstrate how athletic he is in spite of his weight. None of it is necessary. All of it is awesome. The choreography is advanced and detailed, mixing up kicks, punches, grapples, blocks, dodging and flips in a way that its stylish but strangely believable. The problem with a lot of kung fu flicks is even if they look cool, the techniques or movements often appear staged. But not here! Every punch, kick and grapple LOOKS like it really hurts. There is even some unsettling makeup effects near the end as a bloody lump appears on a characters head. Ouch!. My only complaint is that there doesn’t seem to be a lot of fighting during the first half. I’d say “The Magnificent Butcher” and even “Deadnaught” had more combat oriented scenes, or maybe they just spaced them out better.

It’s common knowledge among my modest fanbase that I am not very fond of Hong Kong comedy from the 80’s. It’s too silly and slapstick and ruined “Shaolin Temple 2” for me. “The Prodigal Son” did occasionally make me roll my eyes, especially when characters start singing. But it also did make me laugh quite a bit too. I did like a lot of the dialogue and physical comedy, especially when Sammo Hung or his plump daughter are involved. I won’t say “The Prodigal Son” totally avoids my personal bias against this brand of humor, but at least it mixed gags which annoy me with gags which amused me. I’ve avoided talking about Yuen Biao, because his character is kind of boring compared to everyone else. Yuen lacks the presence of Sammo Hung or Jackie Chan, although he usually made a great supporting character because he has mad kung fu skills. Yet I also thought he was at his funniest here. He played off of everyone well, but was never totally overtaken by them due to having some of the most amusing moments. I also loved the dubbed version. At times, the voice actors sound like Monty Python members. When Yee-Tai is talking like a girl, I couldn’t help but snicker.

I just can’t bring myself to call “The Prodigal Son” great, even if it has greatness within it. The story is too disjointed, the comedy is a mixed bag and the kung fu…well, the kung fu is awesome. It’s directed by Sammo Hung and stars Yuen Biao. IT BETTER BE FREAKING AWESOME. But it is and that’s what we ask for, so “The Prodigal Son” is a success. Yuen Baio and Sammo Hung would never acquire the mass popularity that Jackie Chan did, but they both went onto respectable careers and even had a faze where they were co-starring with Jackie. Together, the trio gave us “Project A“, which is one of my favorite Kung Fu flicks. “The Prodigal Son” to me is one of those flicks designed to showcase talent. Instead of aiming to be a superb movie, it just wants to show us the actors’ athleticism, their martial arts abilities, their comedic timing and even maybe their dramatic acting chops. Much like the early Steven Seagal vehicle, “Above the Law“, the padded narrative ultimately does have a purpose. It’s to showcase more of everyone involved, even at the expense of the overarching plot. I guess I’ve been a bit too harsh because I saw more potential in the story, but if this was a goal, then “The Prodigal Son” probably deserves more credit than what I’m giving it. Everyone got plenty of time to show off and I was impressed. So if you are reading this, please keep in mind that my criticisms might be invalid. I’m judging it based on what I wanted, but what I wanted might not have been what the filmmakers were interested in.

Nudity: None. Some dialogue is pretty suggestive, especially when it appears as if the protagonist is molesting a girl. He’s not, which is part of the joke.

Overall: “The Prodigal Son” is a must-see for Kung fu fans, but newbs to the genre might be thrown off by its bizarre comedic style and its questionable storytelling abilities. You just have to know what to expect. Personally, I liked it.