(Starring Megan Fox, Will Arnett and the CGI Ninja Turtles) 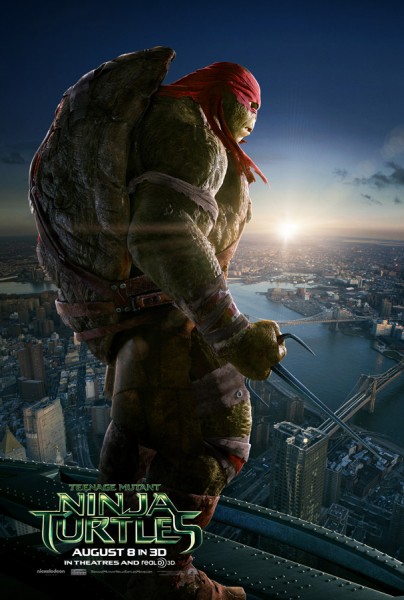 Plot: April (Megan Fox) is a struggling, idiotic reporter investigating the dastardly deeds of the foot clan- a terrorist group lead by a samurai with robotic armor, but discovers that four mutated turtles with ninja techniques can possibly save the day.

“Teenage Mutant Ninja Turtles (2014)” sucked, but the good news is that it was impossible to be disappointed by it. The trailers looked stupid, boasting unfunny gags and awful special effects. It was directed by Jonathan Liebesman, produced by Michael Bay and written by…jesus, this had three writers? I’m still not convinced it even had one! Liebesman’s greatest contribution to cinema so far as been “Battle: Los Angeles“…not because the movie was good (it wasn’t), but because it provided the clips for one of my favorite trailers of all time. Either he has talent, but is greatly restricted by the studio system or he’s a studio system flunky who can competently deliver a product designed to sell merchandise, but lacks the talent to make anything special. Two of the writers (Appelbaum and Nemec) penned the script for “Mission Impossible: Ghost Protocol“, which apparently ate up all of their writing skills as…”Teenage Mutant Ninja Turtles” seriously has a script? My apprehension should clue you in to what I felt about their work on this movie. Daughterty isn’t a bad writer either, but I suppose there isn’t too much they can do when they’re ordered to sell toys, not tell stories. As for Michael Bay, do you need any more proof that this feature was designed purely for greed? Whereas I’m still unsure about Liebesman, I know Bay only cares about the money…which is a shame, because unlike Liebsesman, Bay has done some impressive work. But what does it matter? Regardless of whether the writers, directors, actors, editors, cinematographers or producers have any talent or skill, “Teenage Mutant Ninja Turtles” is not a real movie. It’s a two hour long commercial for the tie-in merchandise, which we’re supposed to buy.

The first half of “Teenage Mutant Ninja Turtles” has quite a bit of action, although most of it relies on (intentionally) obstructive editing and dark lighting, because the turtles need to have a grand introduction. But I didn’t mind that and honestly, I didn’t pay too much attention because the film wanted me to focus on the character of April O’Neil, played by the boobs attached to an actress known as Megan Fox. Kidding aside, I think Fox is underrated by the snarks who think she’s nothing but a sexy body. While she’s yet to step out of her comfort zone, she does know how to use her sex appeal and even can showcase a personality (compare her to the women from the subsequent “Transformers” movies, who lack even that). Unfortunately, Fox’s performance here can be described as confused, bored and maybe even stoned at times. Other times, she displays the wrong emotions. William Fichtner is delivering a speech and I think April is supposed to be inspired by it, but instead of emoting that, she comes across as aroused…okay…But the weak acting aside, April is just a moron and the movie rubs our noses into this while wanting us to take her seriously. We’re supposed to accept that she’s a talented journalist who just hasn’t been given the right opportunity. Too bad she’s so stupid that she doesn’t know to turn the flash OFF on her camera when taking pictures of people who probably won’t want to have their picture taken…She does this TWICE! When she does get a successful picture, she chooses not to show it to her boss, instead presenting all this circumstantial evidence towards the existence of the turtles while coming across as a raving lunatic. Yet she can also be condescending when someone says something that she thinks is stupid. It’s a poorly written character performed by an actress who seemingly lacks direction. As for the turtles, they have the same personalities but in broader strokes. Leonardo is the leader and…that’s the extent to his character. Michelangelo is f@cking annoying, although he does also provide some funny moments…But usually they’re just trying way too hard to make him appeal to pop culture. WAY. TOO. HARD. Raphael is bigger and more badass, even though his character arc is fluffy and predictable, even by this franchise’s standards. Nevertheless, I actually liked this interpretation of the character more than the previous trilogy of movies, where he’s more whiney and always needs to be rescued. Here, there isn’t enough time for him to complain because he has to hurry to the next action scene…and he ends up doing the rescuing. Donatello has become a stereotypical nerd, even snorting at one point. Eh. Shredder is a flat villain who lacks a presence even though he’s a freaking ROBOTIC SAMURAI! Splinter does have the most dynamic personality, but something about his appearance creeps me out. Yet the characterizations usually don’t stand out because what happens when you have a movie with little in terms of character or story? 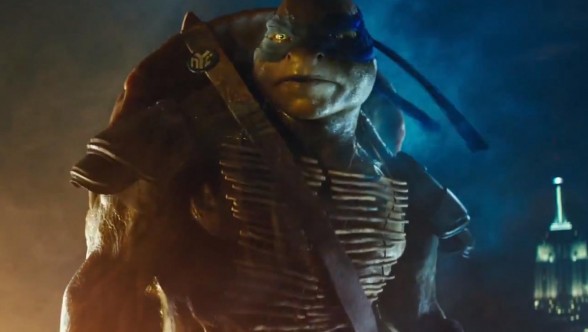 You drown your audience in action sequences! Seemingly endless action sequences! Screw pacing. They don’t need time to take a breather. They need ‘SPLOSIONS! With that said, if Michael Bay was directing this, it would be an hour longer…So the movie has that going for it. Honestly, the special effects didn’t look anywhere near as terrible as I thought they’d be based on the previous. Yes, the turtles do look rubbery, but I don’t think CGI has advanced to where they can make them look anything but (polished) CGI creations. The Hulk has the same problem, so I think humanoid creatures with circular designs are the most challenging computer generated effects. But really, I didn’t mind the CGI…I did think their designs were somewhat ugly though. The spectacle on display is acceptable, but here is the problem. I’ve seen this style of action too many times within the same summer. The Turtles fight less like martial artists, and more like super heroes. “Hercules“, “Transformers 4“, “Guardians of the Galaxy” and “The Amazing Spider Man 2” all provided similar action scenes, but they were bigger in scale and more stylish in execution. “Teenage Mutant Ninja Turtles” seems insignificant in comparison, boasting nothing that can make the special effects or action stand out…which is a shame, because that’s all the flick has going for it. I wish the filmmakers emphasized the martial arts styles, which could’ve given the fight scenes more of a flavor. Yikes, even “The Last Airbender” utilized the martial arts influences more effectively and that is…well, “The Last Airbender“! I did think Mecha-Shredder looked cool, even if the character was dull.

Is there anything else I can say? The script is…dumb. The attempts at comedy tended to fail more often than not, although the characters are so noisy that it’s hard to process many of the jokes. The plot is very standard, yet somehow ends up coming across as convoluted because of the motivations of the baddies. They want to release a dangerous chemical into the populace, but they need the turtles to develop the cure so they can make money off it…Seems like there would be easier ways to do that, but whatever. How will that give Shredder control over the city? Ugh, I must stop using my brain, because movie hurts brain..and brain don’t like to be hurt.  The plot can only exist because April seems to be a coincidence magnet. Regardless of where she is, the foot clan will show up at the right location at the right time, so then the turtles can do something…Ugh, there’s something wrong when April drives the story more than the freaking main characters. Brain is bruised now. Splinter somehow knows everything about Shredder and the footclan, despite having no way to learn any of this…I think my brain just broke an arm. Otherwise, the rest of the plot is safe, predictable and is probably a CGI effect too. “Teenage Mutant Ninja Turtles” is more of a money making product than it is a movie and even them, at least “Transformers 4” (same goals) delivered impressive, high octane spectacle. This is lightweight in comparison, making it even more worthless. Oh yeah, How do the Turtles learn martial arts? Because Splinter found a book on Ninjutsu…apparently that is enough to make someone a master…and my brain just committed suicide. I’m going to buy some turtle toys now. Turtle power.

Nudity: Everyone, regardless of species, wants to have sex with Megan Fox. But otherwise, no nudity and oddly the camera doesn’t perve out and linger on her feminine parts…as much.

Overall: “Teenage Mutant Ninja Turtles” sucked. It’s stupid, exhausting and you’ve seen it beaten at its own game (action, visual effects) by every other blockbuster to come out this summer. It didn’t even stimulate any sense of nostalgia from me.