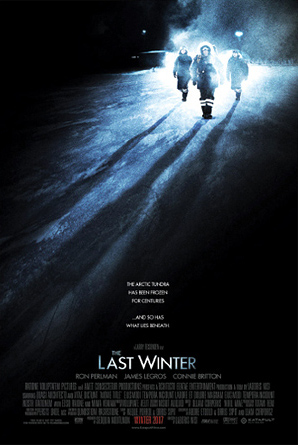 Plot: An American Oil company is building a road in the Arctic National Wildlife Refuge so they can drill for oil. The workers are then plagued by strange and mysterious visions. Is something stalking them in the snow?

“The Last Winter” was an odd experience. When I discovered its existence, I knew I had to watch it. Ever since I fell in love with “The Thing (1982)” as an innocent, bloodthirsty child, I found myself embracing horror films which took place in some cold, snowy location. I’m not sure what it is about the setting that makes it so chilling…figuratively, anyway… I do know why snow is actually cold…Even mediocre movies like “Dreamcatcher“, “Eye See You” and “30 Days of Night” are elevated due to the effectiveness of their locations. So obviously “The Last Winter” has this in its favor and you know what? When it works, it really is a very moody, spooky little thriller. The ambiance, the ambitious cinematography, haunting imagery and the strange performances brought some chills down my spine, making me want to love this. Unfortunately, for every kiss it gave me, it also had the tendency to knee me in the groin and I don’t find that to be a very erotic experience. When it fails, “The Last Winter” is…bad. Sometimes even very bad. I’m talking “The Happening” bad. So the feature ended up being an odd experience which gave me mixed signals. I loved what I liked and I loathed what I disliked. But would I say it was worth the viewing? Read on.

The first thing I noticed about “The Last Winter” is that it LOVES its helicopter shots. The camera is constantly flying over the base, trying to capture it with every possible aerial angle. It moves very smoothly and does provide an aesthetic appeal, but I also thought the helishots drew too much attention to the camera. It’s presumably intended to be a ‘Mother Nature POV’ shot, but instead feels too much like a ‘Helicopter POV’ shot even when there isn’t supposed to be any helicopter. Nevertheless, I do respect the director and the cinematographer for utilizing the camera in fairly creative and energetic ways, even if it does feel like they’re showing off. The part where the camera revolves around the entire base, giving us a look as to what is going on inside the characters rooms through the windows was both excessive and kind of cool. The wide shots of the arctic are very pretty, yet there is also something sinister about them. The locations do become progressively menacing as time moves along. Unfortunately, I never felt any of these characters were ever cold, except maybe when someone falls into a river. You rarely see their breath and they often walk around in minimal clothing. Eventually, they lose all electricity and wonder if they can survive a full day without any heat. But even then, they never act like they’re cold, so the feeling of danger was lacking. To me, this diminished the ‘coldness’ of its atmosphere. Still, I did like the mysteriousness of the enemy. Is there some sort of supernatural presence stalking them? Or does this location cause some sort of mental unbalance, driving them into madness? I liked the ambiguity at first. There’s also a heavy sense of dread, which hits home pretty hard when the characters realize their base isn’t the only place that has been affected.

Sadly, everything that “The Last Winter” is building up to is lost with the finale. Boy, did the ending of this movie suck. The filmmakers were forced to use CGI to render the ‘creatures’ and lets just say these visual effects would feel at home in a film like “Sharktopus“. When they start interacting with the actors, I just could not keep a straight face while watching it. Whenever the menace was represented by strong wind, rain, or even by the characters reactions, I would often shudder or get really still in anticipation. But watching a giant, CGI, Moose-esque monster attack characters, it’s hard not to laugh. Even worse, it really feels like a lot of the ending was edited out. It’s difficult to tell what was going on and when a character wakes up in a hospital, I was pretty confused. It was so choppy and disjointed, like a bunch of random images that mean nothing were being forced into my mind. I was hoping it would redeem itself with the final shot, which could’ve been nightmare inducing. But nope, it’s all left to the imagination. Sorry movie, subtlety was thrown out of the window when you started whoring CGI, bad green screen effects and made your villain a f@cking moose. You can’t suddenly pull back when you’ve already shown too much. I’m sure they just didn’t have the money to film what they wanted, but then they should’ve figured out a better way to convey what’s occurring off the camera. So the build-up was pretty good, but what it’s building up too is awful.

But what about the script, characters and actors? The screen-play is actually okay. It tries to create intriguing characters who have diverse personalities and actually develop as the story progresses. I thought it used its premise reasonably well, fleshing out the mystery and focusing on how people would react to this situation. But it also is irritatingly preachy. We get it movie, harming the planet is bad. When the protagonist has a voice over about what humanity has done to the world, the dialogue becomes so over-the-top that it starts to become snicker inducing itself. Seriously, no one talks like that. Doesn’t the screen-writer know the golden rule of writing movies: Show, don’t tell? Somebody needs to go back to Screenwriting 101. The characters are pretty interesting though, even if they are often used rather poorly. You have the asshole boss (Ron Perlman), the drunk, the natives who might know what’s going on, the love interest, the geek, the inexperienced kid and the tree hugging protagonist. But it doesn’t really stop there. Perlman’s character is interesting because he does have his positive qualities and you’re unsure whether he will be a protagonist or antagonist by the end of the film. The drunk is actually pretty funny, the geek has a spine, the Native’s aren’t stoic and the love interest is very two faced. Granted, the love triangle seemed unnecessary, some personality traits are never explored and the protagonist is probably the most obnoxious character- primarily because he’s used as the voice of the message. But well written characters are difficult to find in any movie, much less the horror genre. So good job. As for the acting, it’s okay I guess. Perlman probably does the best job, but James Le Gros (Hoffman) was rather wooden. I don’t think it’s the actors fault, but the character was very flat compared to everyone else. Le Gros doesn’t add anything to spice up his characterization. Still, even the weaker performances often did add a certain strangeness to the proceedings, giving the events an almost surreal edge. So “The Last Winter” arguably does take one of its primary weaknesses and converts it into a strength.

Ugh, what’s so frustrating about “The Last Winter” is that it’s so close to being an exceptional film, but it just has a few too many missteps which keeps it from being even just a good film. It doesn’t matter how good the build up is, when the pay-off is doomed to blow. It takes interesting characters and either makes them do stupid things in order to drive the story, or talk in a way that is unbelievable. When Hoffman starts screaming “Open your eyes!“, I felt like the director was talking to me through that character about how poorly we treat the planet. A more realistic way to say that is: “There’s a giant f@cking moose! F@CK!”. “The Last Winter” wants to make its point, but it treats its audience like morons by practically spelling out its message. The director has a handful of moments where he fails as a storyteller, like when a character filming himself is assaulted by a monster in what was an admittedly good jump scare. But I was presuming that because we saw it, the characters saw it too. But they act like they didn’t and during subsequent dream sequences/flashbacks, we see that same attack but without the monster. But the finale is when this becomes unforgivable. Everything “The Last Winter” accomplished…ruined by 15-20 minutes at the end. Yet at least a lot of the film was moody and even haunting. I’ve given the filmmakers and their project a lot of crap, but only because they ALMOST convinced me I was in for a real treat. I do think the writer and director are talented. Really, I do. Maybe it’s their inexperience, but they make some baffling mistakes and I hope they learn from them in the future.

Nudity: None, although there is sex.

Overall: “The Last Winter” is worth watching to a point…You’re either going to appreciate it for its successes, or you will HATE it for its failures. I’m in the middle myself.