(Written and Directed by Shin’ya Tsukamoto) 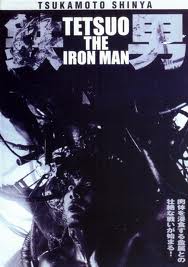 Plot: I don’t fucking know! Er, a man (Tomorowo Taguchi) accidentally runs over a crazy dude (Shin’ya Tsukamoto), who has a strange fetish for metal. The man covers up his crime, but starts having these messed up dreams and hallucinations, suggesting he has his own obsession with metal. What the hell is going on? That question isn’t really from the man either. It’s from me.

I feel bad for any poor soul who sees the title and presumes that this is the Japanese version of “Iron Man”, perhaps with a horror twist. “Tetsuo, The Iron Man” is about as arthouse as a movie can get. There’s little dialogue, a lot of experimental camerawork, it’s shot in black-and-white and there’s excessive symbolism involving a lot of phallic imagery. The story is incoherent, but in a way that suggests the movie is being allegorical. Is it some strange commentary on industrialism? Lust? Guilt? Madness? Many have compared it to the works of David Lynch, primarily “Eraserhead” but I think that’s an oversimplification. While I think both films share the same kind of audience, both movies are different in approach. “Eraserhead” was intentionally slow, emphasizing the mundane life of its protagonist mixed in with his fears and rising sense of claustrophobia. “Tetsuo”, on the other hand, is purely chaotic. It moves quickly to the point of becoming exhausting and in its own way, it’s a spectacle designed to show off impressive visual effects. But I understood Lynch’s movie, whereas I have some suspicions about “Tetsuo, The Iron Man”.

Before fanboys start baring their fangs, I should point out one thing. I am not part of the target audience. While I can appreciate artsy elements, I generally don’t care for movies that go all the way when it comes to catering to a mildly snobbish audience. Am I saying every fan of “Tetsuo, The Iron Man” is a snob? Not at all. In fact, I’ll come back to that. But whenever I watch one of these types of movies, I always find myself smirking in amusement at how easy it would be to con students of arthouse cinema into confusing genius with stupidity. It’s a difficult point to argue objectively, as the whole point of a movie like “Tetsuo” is it works like a Rorschach image. What you see in an artsy fartsy film is less about the movie itself and more about you. When I watch a movie like “Visitor Q” or “Death Smiles Upon Murder”, I see them as bad movies pretending to be arthouse.  They cover up poorly devised plots with themes, allegory, metaphors and symbolism in order to cloud the fans judgment. To me, it’s nonsense, but remember the Rorschach comparison? It is possible that I am victim of the same thing. Maybe my boredom corrodes my better judgment. “Tetsuo, The Iron Man” is a cut above the ones I mentioned, but I won’t even pretend like I understand it. If there is some deep meaning to the film, the director intentionally muddies the waters with his hyperactive editing style and bizarre special effects. Personally, I think he just wanted an excuse to show off lots of surreal and crazy imagery. 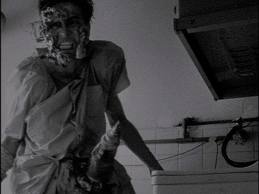 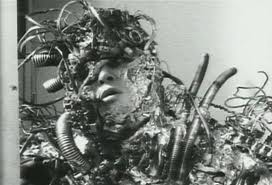 Yet I can’t deny that the body horror- insert David Cronenberg reference here- was pretty impressive and disgusting. There’s nothing subtle about this movie and while I expected many grotesque abominations, the drill penis was certainly something I did not expect. In fact, none of the horrors this film presents are conventional. It’s all very creative. The stop motion and practical effects alike looked startlingly good considering the time this was made and the little money they had to work with. You can expect many unsettling, weird moments involving the crazy transformations or the blood spurts. There’s a distinct feeling that the SFX crew are intent on pushing the boundaries of special effects despite their minimal budget.

So is “Tetsuo, The Iron Man” art? I don’t know. It’s a stupid question anyway because no one agrees on what that even means. But unlike other films that exploit its target audience into thinking a shit movie is brilliant, at least there was effort put into this. It’s unique, bizarre and the effects are stunning. However, eventually I just started getting tired of it. The director was just being a little too self indulgent for my tastes and I couldn’t make heads or tails of the feature. I don’t like these movies because they sacrifice character, story and pacing for the sake of whatever artistic pretense that the filmmakers want to explore. For a movie that wasn’t very long, I was pretty bored. But I respect aspects of it and I can see why some viewers love it.

Nudity: Oddly, I didn’t catch anything specific but there is a lot of sexual imagery and a dude gets sodomized by a chick with a robotic, tentacle phallus. Yes, you read that correctly.

Overall: “Tetsuo, The Iron Man” is worth watching if you like these types of movies. If not, you might appreciate some elements, but I don’t see you enjoying this.