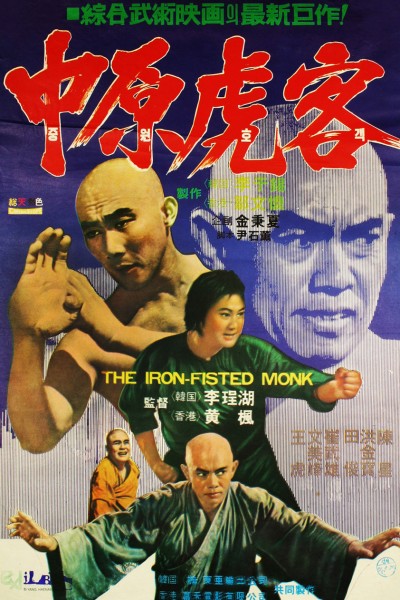 Plot: Husker (Sammo Hung) had joined the Shaolin Temple in order to avenge his Uncle, who was brutally murdered by Manchu thugs. However, once he has mastered the martial arts and leaves the temple, he gets drawn into the revenge story of a factory worker (Chu Ching)- whose sister was raped by a nasty Manchurian Officer (Hark-on Fung)

“The Iron Fisted Monk” is primarily known for two things, the first being that it was Sammo Hung’s directorial debut. The second is this is what presumably began Sammo’s obsession with including rape scenes within his comedies, and this rape is among the most graphic examples to appear in a kung fu flick that isn’t ‘Cat III’. I felt the attempted rape in Sammo’s “The Magnificent Butcher” was a tone rapist itself, but at least the girl was killed before it actually happened…Erm, that didn’t sound anywhere near as bad in my head…I don’t know why, but rape carries an ugliness in film that murder can avoid given the context. I’ve seen people getting their heads cut off played for laughs, but I’ve never seen the same thing done with rape- unless it’s dude-on-dude, because Hollywood discriminates against men. Whenever I see extreme sexual abuse, it’s usually in an edgy drama or a dark drama, but only in Hong Kong can you find it in a comedy. Oddly, the violation is rarely designed to be funny, but it will often be proceeded and followed with slapstick humor. “The Iron Fisted Monk” is one of these ‘comedies’, yet the inconsistent tone isn’t even the worst part of it. In fact, my biggest issue was how gratuitously sleazy the rape was. It’s not an ‘attempt’, nor is it implied. It’s probably the most explicit rape scene I’ve ever seen from a kung fu flick during this time period, complete with nudity and awkward thrusting. However, Sammo allows the camera to linger on the exposed breasts enough to make me think that he’s eroticizing such a violent act. It’s both trying to be intense and sexy, or at least at least that seems like the goal. It’s this one moment that makes it hard to fully recommend “The Iron Fisted Monk”, as it is tasteless enough to offend some viewers. If you can accept the occasional tone whiplash, or at least endure it, then you will find “The Iron Fisted Monk” to be kung fu gold. It has a cast of colorful characters, lots of superb action and a sophisticated prowess which you don’t see accompany these kinds of movies very often.

“Iron Fisted Monk” is briskly paced, knowing when to speed up or slow down. The fights were nicely spaced and the majority of the running-time seems to be dedicated to some form of action. The choreography shows off plenty of advanced techniques, which look both cool and practical, but they’re all executed with the right speed. The fighters move quickly, but not so fast that your eyes can’t keep up. The techniques are balanced with plenty of acrobatic displays as well as a certain amount of wireworks, which give the fights flavor but never seemed gratuitous…if only Sammo choreographed the action like he choreographed rape…While the majority of the combat is hand-to-hand based, there were some exceptional weapon-oriented battles and the choreography often utilized props and sets to keep the martial arts action from going stale. The camera placement was often inspired, using unique angles and framing techniques, but it never distracts us from the choreography. Sammo Hung’s style isn’t minimalist like Chang Cheh, but it’s not overtly stylish either. It enhances the choreography, while providing the aforementioned sophistication that you rarely see accompanying 1970’s kung fu efforts.

Even though the plot is very familiar, the execution is somewhat different than usual. Sammo Hung usually plays goofballs who aren’t very bright, but while Husker is pretty silly and he’s not the smartest warrior out there, he can be serious and has flashes of intelligence. Revenge might be his motive, but he doesn’t think about that all the time. Most protagonists who seek vengeance are very narrow minded in their quest, but Husker showcases a variety of emotions and Sammo Hung sells them like a pro. The monks aren’t as rigid as they usually are and even when Husker defies them, he does head their advice more often than not. The villains actually hatch clever plans that don’t involve kung fu and while they’re pretty evil, the final antagonist is in many ways a victim of his underlings malicious ways. Remember in “The Magnificent Butcher” how the final enemy was just a Father who wanted to avenge his (very undeserving) son, either unaware of his crimes or simply refusing to believe them? The top dog Manchu might not be as sympathetic, but he probably wouldn’t bother fighting the heroes if he saw proof of his underlings’ actions. Hell, even the clichéd mole faced weasel character is shown to be somewhat edgier than usual. “Iron Fisted Monk” was written by people who understand the conventions, but instead of relying on or deconstructing them, they simple tweak the formulas just a bit to keep the familiar formula fresh.

I chose to spend the entire opening paragraph on the rape because it almost does overshadow the films greatness. Many unsuspecting viewers will be repulsed and even those who expected a rape scene- which I was- will be thrown off guard by how unnecessarily sleazy it is- which I also was. Yet if you can get past that and the occasional additional, unnecessary moments of nudity and sex, “Iron Fisted Monk” is definitely worth a watch. The script might rely on conventions, but the writers play with them, showing that occasionally there is real effort put in kung fu screen-plays…occasionally…The character interactions are a lot of fun to watch as well, because the actors all have chemistry. But above everything, “Iron Fisted Monk” has top notch fight sequences, which will dazzle even hardened veterans of the genre. I’m a little confused as to why they named this movie after a supporting character, who isn’t even as prominent as the titular mentor from “Drunken Master“. I suppose “The Iron Fisted Monk” is a better title than “The Husky Monk“, although I think “The Monk with the Iron Belly” was a missed opportunity. Anyway, I’d say “The Magnificent Butcher” is a little bit better, although they’re both in the same league. “The Iron Fisted Monk” gets a clean wins over “Deadnaught” and “The Prodigal Son” though, making this one of Sammo’s best…Ugh, if only they eliminated that God damned rape…

Nudity: There are two rapes, but it’s the first one you have to look out for. It’s insanely graphic and drawn out, whereas the second one cuts away before it actually starts to happen. There’s two more pairs of breasts, although those aren’t as rapey. I don’t mind nudity, but I did feel it was unnecessary here.

Overall: “Iron Fisted Monk” is a must-see for kung fu enthusiasts who are able to endure scenes of graphic rape.