(Directed by Johnnie To) 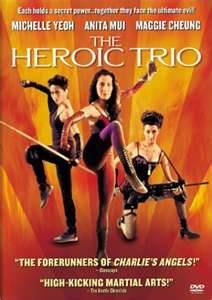 Plot: Ching (Michelle Yeoh) uses an invisible cloak to abduct babies, although she isn’t without remorse. She has been raised and brainwashed by a mysterious villain who lives in the sewers. He wants these infants for some nefarious purpose, but he’s about to meet his match. Tung (Anita Mui) seems like a normal housewife, but she is actually a masked superhero called Shadow Fox. Yet both sides have to also worry about the elusive Thief Catcher (Maggie Cheung), a mercenary who has plans of her own. But soon Ching, Tung and the Thief Catcher (She’s referred to Chat or Mercy, depending on which version you watch) will have to work together in order to bring this evil down. Will they succeed?

“The Heroic Trio” has to be one of the most glorious messes that I have ever laid my eyes upon. It seems to disregard conventional script structure. It has no respect for tone although to be fair, that sums up half of Hong Kong’s cinema in 90’s. It has brilliant special effects and it has laughable special effects. The character development makes no sense and the villains motives are hard to understand. An early scene has the Police discussing the child abductions and one casually suggests that a supernatural element is present. We- as in the viewer- have seen nothing to indicate this so expect everyone to dismiss him as foolish, but instead they all nod in agreement. My face contorted into confusion and I blurted “the hell?”. Every scene seems to have inspired that reaction from me. But I loved every minute of it.

What’s so bizarre- about an already bizarre movie like “The Heroic Trio”- is how it should be terrible. 80% of the screen-time seems dedicated to stuff that never becomes relevant. The film opens with Tung (Anita Mui) and her husband, Inspector Lau (Damian Lau), buying a house. As they share little screen-time together in it, one wonders why that was a necessity. When a robber tries to hot-wire their car, we see a smooth demonstration of Lau’s martial arts skills. It’s made out to be a big deal, but he never uses those abilities again during the rest of the movie. A later scene has Tung rescuing a little girl and her kitten, which also lacks a purpose because the girl was a one-shot character. We already know Tung is heroic. She’s the mysterious Shadow Fox (Wonder Woman in Hong Kong. Aint copyright a bitch?), the towns resident superhero. Yet strangely, no one recognizes her even though that mask barely covers any of her face. Maybe strangers would overlook the resemblance, but her own husband? Sure! Yet not once did I get angry at “The Heroic Trio” for padding itself with filler. 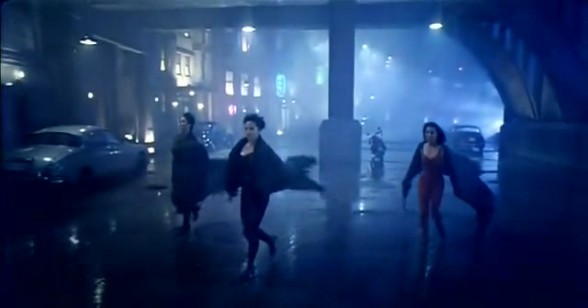 Nor did I find myself annoyed at the goofy attempts at melodrama. The film beats certain relationships into us with such severity, but half of them are unclear. Is Ching (Michelle Yeoh) in a relationship with the doctor? We know she has feelings for him- and vice versa- but it’s unclear whether or not they’ve acted out on those feelings. The sappy- but stirring- music makes the emotions so thick that I often spent the film gagging. Contrast these scenes with the strange, slapstick sense of humor that usually follows the Thief Catcher (Maggie Cheung). Then contrast those scenes to the brutal violence that comes out of nowhere. Ching forces her hand underneath a door, graphically ripping off the skin of her knuckles. Later on, we think Shadow Fox has saved an infant, only for blood to start spurting from the back of the babies head. That’s just the least of it. This usually would create an issue with the tone, but somehow it clicks. It’s dark, grueling, silly and sweet. Expect to get diabetes just from watching it. I remember watching the sequel (“Executioners“) as a kid and if my memory isn’t totally failing, that film is both darker and sillier. I wonder if that one made the bi-polar tone work too.

There’s a lot of wire work, which usually looks silly. The editing makes everything sort of choppy but once again, it doesn’t really detract from the feature. It adds a nice level of camp to it. Sometimes the fighting is genuinely smooth. Like much of the 90’s, the combat sequences resemble dances but they’re so intense and stylish that you wouldn’t have it any other way. Sometimes the action is very gimmicky and strange. There’s a lot of stuff you don’t expect, like when Shadow Fox and Thief Catcher suddenly use their motorcycle as a weapon. The effects are usually cheesy and bad, my favorite being when a skeleton comes to life and attaches itself to Ching. It’s hard not to feel embarrassed for Michelle Yeoh, as she’s doing her best to pretend that the rubber prop on her back is alive. But once again, it adds to its camp value. Then we are stunned when a good special effect sneaks its way into there. When the train derails and drives through the building, it looks like the real deal. Regardless of whether they work or fail, you can clearly see that the filmmakers are being creative with what they have. I also adored the mean-spirited violence, which is cringe inducing and makes the movie sort of unpredictable. Sometimes the atmosphere is kind of unsettling. The locations are brooding, the fog is ominous and the villains look creepy. But the sub-villain steals the show. Anthony Wong plays a super-human, cannibalistic psychopath who eats his own severed fingers and wields a flying guillotine. I wouldn’t say “The Heroic Trio” is scary, but it does have a lot of ‘horror’ elements. 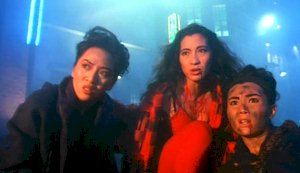 With the exception of its cast, I shouldn’t like anything about “The Heroic Trio”. I’m not a fan of mawkish melodrama, padding, bad special effects, wacky comedy, wire work or bi-polar tones. But somehow, despite having ALL of that, “The Heroic Trio” is a lot of fun. I accepted it in all of its demented glory. But it’s not ‘so bad-it’s good’ either. There is real talent, both behind and in front of the screen. It’s easy to forgive its shortcomings because there’s something inventive about them. It uses the badness to its advantage, while offering good stuff too. To remove a single weakness would probably cause the whole thing to collapse on itself. It’s like Hong Kong’s equivalent of “The Army of Darkness”. With that said, you have to understand and respect the movie for what it is. Some people will be put off by its “style” and just presume it’s a bad movie. Maybe they’re right. When I stress the films entertainment value, you have to understand that what ‘entertains’ us is purely subjective. “The Heroic Trio” isn’t for everyone, but I am one of the fans.

Overall: “The Heroic Trio” is the ideal cult movie, so I believe you should watch it. You just have to consider everything that has been said.