(Written by…unknown. I can’t find any information regarding this.) 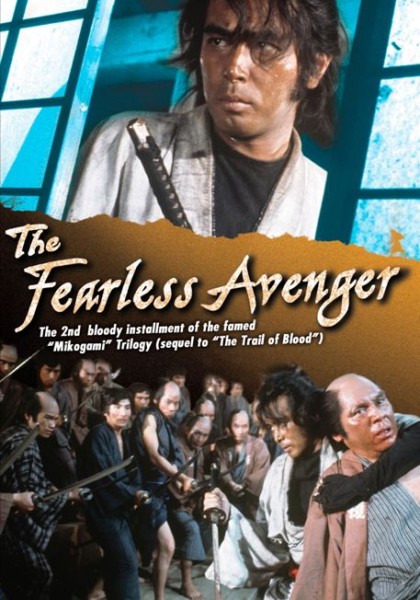 Plot: Dangerous swordsman Jokichi (Yoshio Harada) continues to hunt down the men who killed his wife and son. He can acquire information on their whereabouts if he helps escort the daughter (Ryoko Nakano) of a respectable gangster. But is anything that easy? Also known as “Trail of Blood 2”, “Trail of Blood II” and “Mushukunin mikogami no jôkichi: Kawakaze ni kako wa nagareta”.

“The Fearless Avenger” is the second part of the Mikogami Jokichi trilogy, following “Trail of Blood” and proceeding “Slaughter in the Snow”. “Trail of Blood” isn’t what I consider to be a ‘masterpiece’, it being a prime example of ‘collapsing under its own weight’, but at least it’s failures were…interesting. It showed off enough potential while being entertaining, so I have to admit that I was looking forward to completing the trilogy. “The Fearless Avenger” is sometimes considered superior to its predecessor and I sort of agree. In many ways, it accomplishes what “Trail of Blood” attempted to be, yet I still prefer the original. As I said, “Trail of Blood” wasn’t a masterpiece, but I preferred its visual style and felt it was more memorable than this sequel.

“The Fearless Avenger” once again crams in enough stories to fill four or five movies. It opens with Jokichi crashing a gangster party that is being attended by Boss Chogoro (Ryohei Uchida), but he is nearly killed in the process. He’s ostracized by other gangsters, who don’t want to hire him anymore. Then he gets an offer to protect the spoiled daughter (Ryoko Nakano) of one of the more powerful bosses. If he brings her back home safely, he likely will be able to track down his targets. He does so, but finds himself harassed by an assassin from the first movie who wants revenge. Both plot lines are resolved around the half way point, making one wonder why they were there in the first place. Jokichi proceeds to travel to an Inn where his enemies are staying, but arrives too late and finds himself stuck in another story. The local gangsters are feuding, one being Chogoro’s friend, who decides to lay a trap for Jokichi while also hiring him. Minor plot points include a sassy prostitute who falls in love with Jokichi and Chuji (the main antagonist of the trilogy) being arrested by the authorities.

So that’s a lot of story, but “The Fearless Avenger” smoothly keeps itself from being convoluted by making all of these threads tie into Jokichi’s character. Now that I think about it, “Trail of Blood” also was trying to be more about Jokichi the character than the story itself, but everything felt so crammed in together that his development was rushed in the process. “The Fearless Avenger” isn’t as hurried and the majority of these subplots do add a lot to the character. Jokichi is a very flawed hero. He has become somewhat of a suicidal prick and these stories show how careless and dangerous Jokichi has become to the people around him. Jokichi is constantly making mistakes that derail his quest and get other people hurt in the process. He seems to lose just as many fights as he wins and this made “The Fearless Avenger” more engaging. Granted, I didn’t see the point of the eye-path wearing Ronin showing up for a single scene and the love story (sorta) didn’t feel relevant as it doesn’t effect Jokichi. But at least it’s a step in the right direction.

Kazuo Ikehiro’s direction is much more simplified this time around. He doesn’t seem like he’s attempting to prove anything in terms of style. The cinematography is much more grounded, the framing of sequences isn’t as creative and the violence has been toned down. The directing isn’t bad, it’s just more in line with most Chambara efforts. It felt more 60’s than 70’s, but it’s all a matter of preference. Personally, I liked “Trail of Blood”’s visuals more because it made the film unique. Furthermore, the funky music felt out of place for this entry. It fit nicely with the style of the first movie but not in the classical approach of “The Fearless Avenger”. The fights sort of reflect the old school approach. There are fewer exceptional moments, but there aren’t as many sloppy parts either. The editing in general was definitely a step up, with the transitions feeling smoother and the pacing was less erratic. I wouldn’t call “The Fearless Avenger” a fast paced movie, but it moved well and I never became impatient with it.They probably could’ve toned down the “Jokichi walks” scenes a bit though. 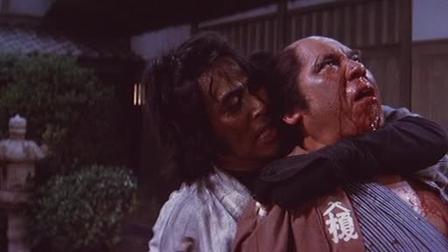 Enjoying “The Fearless Avenger” comes down to what you think about “Trail of Blood”. It improves on its narrative, the editing and the character development. The fight scenes have been evened out too. The direction no longer feels like a youngster was behind the camera, trying to make his stamp on the genre. Instead, it’s directed with a steadier hand by a veteran (and he was). It makes its missteps, but I’d say “The Fearless Avenger” is the better movie, but I won’t remember it as much as “Trail of Blood”. For all that films flaws, I appreciated its strengths more and it will always have a place in my mind. Apparently “Slaughter in the Snow” is the weakest of the trilogy, but we’ll just have to see.

Violence: Rated R. While not as graphic as its predecessor, it is still pretty violent.

Nudity: You might see a little bit during an attempted rape. Later on, we see the aftermath of a rape, but there’s no nudity.

Overall: If you didn’t like it’s predecessor, I don’t think “The Fearless Avenger” is so much of a step up that it’s worth watching, but if you were a fan (or like me, thought it was okay), then I think it’s worth a viewing.