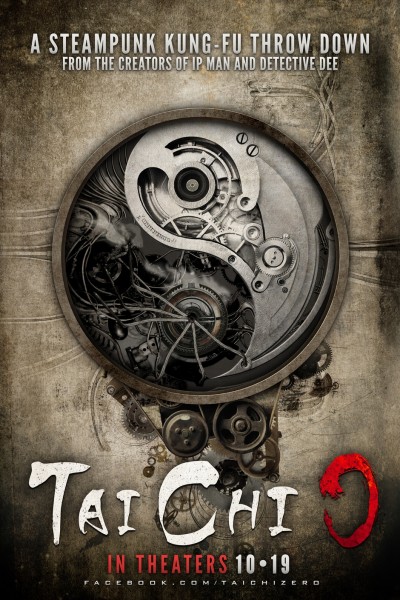 Plot: Lu Chan (Jayden Yuan), also known as the Freak, has a mysterious horn that’s growing out of his head. When the horn is damaged, Lu Chan’s fighting abilities are jacked up to unstoppable levels, but his lifespan is shortened in the process. In order to save himself, he must travel to Chen village and learn their internal kung fu. But they don’t take kindly to outsiders and he’s about to walk into the middle of a violent feud.

“Tai Chi Zero” is in its own way brilliant, considering how it tricked online reviewers, professional critics and general audiences into presenting the movie as something far more interesting than it really is. It’s hard finding a review that doesn’t emphasize the steam punk elements of the film, which is odd considering the film itself doesn’t emphasize its steam punk elements. There is one big ass machine that is a major threat throughout a large portion of the second act, but it’s treated as a subplot and is destroyed long before the movie ends. I’ve heard constant comparisons to “Kung Fu Hustle” and “Scott Pilgrim Vs the World“, but while there are a handful of scenes which suggests “Tai Chi Zero” was drawing inspiration from them, there aren’t many similarities. Yet according to the reviews and especially the trailers, it’s: “Kung Fu Hustle” meets “Scott Pilgrim” taking place in a steam-punk universe. Yet these elements don’t embody more than 25% of the overall film, so how did this film con the world into thinking otherwise? “Tai Chi Zero” is at its core, a very normal kung fu movie that somehow seems more unique than it really is with its random steam-punk additions and bizarre stylistic touches. Yet I am not criticizing this, because it’s these attributes which give “Tai Chi Zero” its identity. Without them, the flick would immediately dissipate from my memory, even though I did enjoy myself the majority of the time. My main problem is that it feels more like half of a film instead of a single film.

My first experience with Stephen Fung as a director was “House of Fury“, a goofy, hyperactive but amicable flick and he brings that same high level of energy to this project. There isn’t a single boring shot. Every scene is either showcasing gorgeous scenery, awesome set pieces or colorful green screen work. If something looks a little standard, Fung will insert plenty of strange additions to make things more quirky. Subtitles will appear with new characters, explaining who the actors are in an overly enthusiastic fashion and while this aspect might not age well, it was pretty amusing as of now. One fight is presented like it’s a video game match-up. The special effects are usually good, primarily when they’re surrounding the giant machine. It looks shockingly real, but the explosions sucked pretty hard. Luckily, the good visuals outweigh the bad by a large margin. There’s a lot of added effects to the various fights, showing exact movements of techniques and they usually do add to the entertainment level. The combat choreography was acceptable, but standard. Honestly, I didn’t care for the fight scenes that were gimmicky- such as when the master takes out a bunch of soldiers. The camera is obviously sped up and it relies on post production trickery over actual choreography. But when the fights are old school, the movements look good and the energy is high. There is also A LOT of fighting. It seems like someone is entering a stance every five minutes! “Tai Chi Zero” is a fast paced flick, if anything.

“Tai Chi Zero” was shot back-to-back with its sequel, “Tai Chi Hero“, and that leads to the primary problem. The film fails miserably as a standalone movie. Instead of ending, it just kind of stops, because the story has to continue with part 2. But the way things develop just feels awkward. The heroes are often unlikeable and the villains sometimes end up being sympathetic. Our hero is your typical simpleminded but good natured fighter, but he’s so pushy that he becomes irritating. The villagers are the real villains of the piece, looking down upon outsiders and causing all of the problems because everyone in this place is a douchebag- and I mean everyone. Even the love interest deserves to have her ass kicked. Speaking of which, the love story sucks too, although at least most of it is just setting up for an actual relationship to take place in part 2. But they lack romantic chemistry, so I have interest in watching them become a couple. The villains have understandable reasons for their actions and I have to admit that I sometimes would root for them. It’s even worse because the villains tended to be push-overs. They look kind of scary, but almost every fight is one-sided in favor of the heroes. I presume the villagers will develop in part 2 and I’m sure the sequel will provide better threats, but this is part 1. I’m not reviewing “Tai Chi Hero“, I’m reviewing “Tai Chi Zero“. Finally, I didn’t like how the protagonist is absent throughout the entire third act. He is unconscious and doesn’t take place in the final battle…Um, oops? Much like “Scott Pilgrim“, “Tai Chi Zero” did a superb job at writing its supporting cast…but our lead is so boring. The actor isn’t bad, but the character is brutally conventional. Oh yeah, this is a comedy and while there are a few funny moments, usually the jokes did little for me.

“Tai Chi Zero” feels like the first half of a good movie. Certain subplots or characters could’ve easily been omitted. It spends too much time making the villagers into unsympathetic assholes, spends too much time into developing its VILLAINS instead of the heroes- making it mean feel kind of mean spirited whenever they would be hurt. It’s priorities are all f@cked up, primarily because presumably the sequel will have the village acknowledge their mistakes and the villains cross the line. But if that’s the case, then props to “Tai Chi Hero“, because “Tai Chi Zero‘ was thrown under the bus in the process. If you can overlook these issues, you should enjoy yourself. “Tai Chi Zero” might be a normal kung fu flick at its core, but it’s competently executed and provides plenty of solid fight scenes. Even without the steam-punk and crazy style, I think I would’ve enjoyed it- although it wouldn’t say with me very long. But it’s because of the steam-punk and crazy style that anyone remembers “Tai Chi Zero“, even if my fellow reviewers exaggerate their presence. So “Tai Chi Zero” is certainly worth watching, although expect to do battle with the films serious flaws.

Overall: “Tai Chi Zero” might be too over-the-top for some people, but I think it’s at least worth a try.