Plot: In a dystopian future, the Earth has become uninhabitable with the exception of two large areas, the United Federation of Britain and the Colony. Both sides are constantly at each-others’ throats and the civilians are caught in the middle of it. Douglas Quaid (Colin Farrell) is a factory worker who’s bored with his life, even though he’s married to the beautiful Lori (Kate Beckinsale) and has good friends. He becomes interested in a procedure called ‘Total Recall’, where false memories of a much grander life are implanted in your head. He wants to be a spy, so will experience what it is like being that. But just as it begins, something goes wrong and he finds himself running from the Police. It turns out that he really was a spy and ‘Total Recall’ just awakened his past memories. Or is he still in Total Recall?

Before I began dissecting this 2012 remake of Paul Verhoven’s 1990 classic of the same name, I probably should talk about my feelings towards the original. I’ve seen it and remember being impressed, but it has been quite a few years since my last viewing. When I try to remember it, I can barely recall the story (no pun intended), although its more spectacle oriented traits have stayed with me. The grim- yet flashy- settings and bizarre mutant designs are pretty clear in my mind. But when it comes to the characters or story, I mostly am drawing blanks. So I’d like to think that I’m going to be a little bit more level headed when approaching the remake, even though as always, I loathe Hollywood’s inability to bring anything new to the table. For the first 30 or 45 minutes, I was exhilarated! The movie was pretty exciting in its own right. But as time went on, I started sighing and yawning. The film had run out of steam and I was bored.

What made the first act so fun? Its world enamored me thanks to the elaborate and detailed settings, the creative props (weapons) and the scope that surrounded everything. The movie has a bleak atmosphere, but it doesn’t resort to the cliched, washed out look that most of these movies exploit. Instead, everything looks grand and epic, with a lot of the buildings, suits, etc being white. I don’t understand why so many science fiction films always have such depressing looking futures! “Total Recall” has a morose world, but it’s the people who are sad, not the cities they live in. It The CGI was uneven, but it rarely lingered enough to leave a (negative) impact on me. Does the film look a little too digital? Sure, but Len Wiseman keeps the camera moving so fast that it’s hard to notice. This leads to another complaint though. Whenever there are flashing or blinking lights, the glare is blinding. The camerawork only disoriented me even more. The close-ups are the worst. When Wiseman relies more on the wide shots, the film is gorgeous. But the close-ups gave me a headache. Nevertheless, his direction is usually competent and he is a startlingly good action director. The hand-to-hand fight scenes are surprisingly well choreographed, complete with plenty of nifty techniques that are stylish but never too fanciful. The stunts are pretty creative and smooth, with the action dominating the bulk of the screen-time. So why did I start to lose interest? 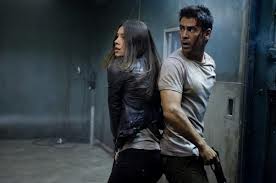 Well, predictably, the characters are all conventional and any attempts at fleshing them out backfire because it just brings more attention to the fact that they are nothing short of caricatures. Quaid is concerned that he won’t measure up to his past self, who was the true badass. This is hard to take seriously because Quaid never really seems to make any mistakes. Sometimes everyone else’s mistakes affect him, but he himself responds to the situations about as well as one could hope for. So why is he complaining? That development doesn’t fit his actions at all! Melina (Jessica Biel) is even worse, as she doesn’t have much of an character. She shows up, but spends the rest of the movie needing to be rescued or is just tagging along. Quaid makes the big decisions. Biel claimed that she joined the project because of the love story. Yeah right! The movie has like two scenes dedicated to their relationship and both of them are very vague about it. Is there anything to her character? Nope, she’s just the love interest who happens to be tougher than your usual leading lady. The film constantly asks us to care about…everything, even when there is no reason for us to be emotionally engaged. One character who is friendly to our protagonist is killed and the film seems to want us to cry for him. Quaid is sad and the music is sad, but why should we shed any tears? We saw him only once before! Typically, the good guys are good guys and the bad guys are bad guys. There’s no middle ground. Cohaagan (Bryan Cranston) and Lori do everything they do because they’re eeeeevil. I generally don’t mind this, but Cohaagan needed more screen-time to leave an impact and while we’re supposed to loathe her, Lori’s actions are somewhat understandable. She’s a soldier who in her eyes, is hunting a traitor and a group of terrorists. The story takes no risks and just goes through the motions. But believe it or not, this isn’t the reason why I was nearly put to sleep.

Let’s pretend that story-wise, this remake was 100% faithful to the 1990 movie. Why is Verhoven’s film so much better? To me, that film is superior because its imagery stayed with me. I can remember the sets, mutants, etc because that movie continuously changed those sets and delivered new kinds of mutants. It continued to top itself all the way until the end. The problem with “Total Recall (2012)” is that after the first 30 minutes, you’ve pretty much seen everything that this movie has to offer. We’ve seen all of the different vehicles, weapons, buildings, gadgetry, etc and it starts to get redundant. Other than the three boobed chick, there are no mutants either, just a bunch of dudes in Storm Trooper suits. Once you get used to the films style, then that aspect stops leaving an impact. So we’re forced to endure the rather mediocre script. But I’m used to bland screen-plays, so what makes this one so much worse? For me, I felt like I knew how every scene was going to end. When he finally finds the resistance, I immediately guessed that this sequence would end with the villains breaking through the windows. I was right. When the entire movie is like this, then there is no mystery or suspense. Maybe this would’ve been okay if the film was 30 minutes shorter, but it wasn’t! I generally can tell how a movie is going to end, but rarely do I accurately guess how every scene will conclude. 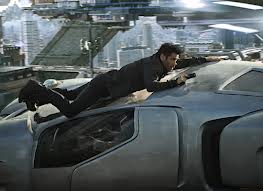 So “Total Recall” starts off strong. It contains ambitious special effects, strong action sequences, a fast pace and great actors who do the best that they can (Beckinsale is awesome). This usually is enough to redeem uninspired scripts, but the feature runs out of steam before even reaching the halfway point. Once you get used to the action and the CGI, then the films strengths start becoming transparent. After I lost that anchor, I started to yawn and wonder how much left there was before the movie ended. Had the film spent less time polishing the CGI and more time dreaming up unique and fresh visual effects, it probably would’ve kept me engaged. Verhoven got it right. He showed us something new every few minutes, which made up for any weaknesses within the story. That is why people love it! Nobody is going to even remember this remake because it uses up all of its creativity within the first act. The rest is mediocre or generic, which these days translate into ‘boring’ for me. Ten years from now, I’ll probably still recall the finer points of Verhoven’s film. But when I try to think of its remake, I will scratch my head in confusion.

“Remake? There was a remake?”

Well, unless it bombs anyway. Then Wiseman’s film will go down in history as one of the most expensive bombs of all time, along with “John Carter” and “Battleship“.

Note: This will be labeled under ‘martial arts’ because there is a fair amount of hand-to-hand combat.

Nudity: You do see the three boobed chick and yes, she shows off her breasts.

Overall: At best, “Total Recall” is a rental because it’s so bland. Just watch the 1990 film instead.