Plot: Miners and scientists find themselves isolated in a South African desert with a demonic creature who leaves only the bones of his victims…before snatching those too. But why?

I am a sucker for films that boast unique concepts or settings and on 4/7/2014, I was in the mood for something different…something that wasn’t part of my “Dragonball Z Month(s)” and something that didn’t share the exact same location or premise of the majority of horror films out there. Naturally, based on the title of this review, you could probably guess that my target was going to be…”Nine Lives”…the Paris Hilton horror feature. I thought the idea of a bunch of teens being trapped in an isolated mansion sounded cool, but my brain was promptly raped by annoying characters and their even more annoying dialogue. The pacing was so slow that three hours later I realized that I was only 15 minutes into the flick…I had a choice, end my life to get out of watching it…or turn it off…I chose the latter in order to replace it with a different kind of bad movie- the more fun kind- which was “The Bone Snatcher”…a title that sounds kind of sexual. “The Bone Snatcher” is NOT a good movie, but I was surprised that I enjoyed it as much as I did. It deserves its spankings, but it was a nice throwback to the creature features of old. I’m pretty sure choosing it over “Nine Lives” will be regarded as one of the best decisions I ever made…God, my life is so insignificant and empty.

It always confuses me when multiple writers team up to create a script that is comprised entirely of clichés…”The Bone Snatcher” reminded me of MANY other movies, ranging from “Aliens” to “Tremors” to “Them!” to “The Thing” to…well, every creature feature ever made. What’s REALLY strange is that I started to actually enjoy spotting all the clichés and conventions. A scientist is forced to do field work and is greeted with hostility once he arrives. There’s a hot chick (with a British accent) who starts off cold, but will eventually become his love interest. There’s a badass, hands-on guy who is the foil to our brainy hero.  There’s the token black guy who knows what’s going on. There’s the religious person who is always talking about prayer. There are misunderstandings where characters think there is a more natural explanation for what it is going on (‘so and so’ is the killer) and their truck conveniently breaks down so they can’t escape. There’s the finale which takes place in a mine, that looks suspiciously like the same one from “Ghosts of Mars”. The scientist figures out what Is going on in the most unbelievable, contrived way possible. You can tell what is going to happen long before it actually happens…but maybe it’s because I am partial to these movies…or I had just witnessed “Nine Lives”…But I really didn’t mind the conventional script…I felt at home with it. 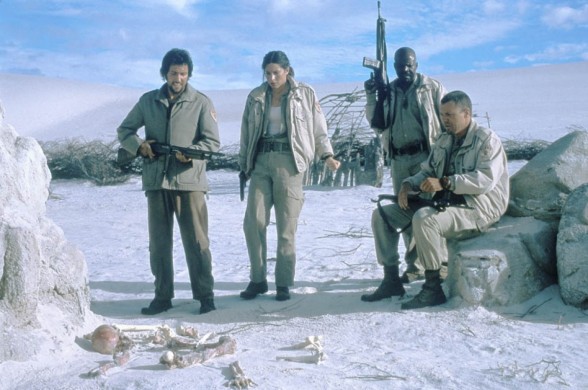 What I did mind was the obnoxious characters…although once again, “Nine Lives” really helped me get through this flaw without too much of a problem. I can’t stand it when the majority of the interactions are dedicated to rude quips and angry yelling. It only begins to give out free headaches and I thought it was pff that they threw in a love triangle for the sake of throwing fuel into the already blazing fire. I say ‘odd’ because there isn’t any real pay-off to it. The hardened guy who is destined to lose occasionally stares longingly at the girl, who seems more interested in the weak and whiny guy…who obviously returns her feelings. Yet it’s as if the movie forgets about that and the characters bickering tends to be based around the monster. I suspect the majority of that subplot was edited out, but why leave any traces of it if that was the case? Part of the problem is that the most unsympathetic character is our hero, who is just a whiny load who for some reason becomes badass at the end. Yet even then, he has difficulty ending this threat for…reasons of science? It’s never explained, but he’s an asshole for even hesitating to kill it. We’re supposed to take his side whenever he clashes with his love rival, but honestly, I felt he was always the one being unreasonable. Even when he has a good point, his attitude made me oppose anything he had to say. The acting is okay all around, I guess. Some performances are a little wooden, but considering the genre and budget, it was acceptable. Although the guy who played the back-up was pretty terrible.

The monster looks shockingly good, with a creative design that becomes increasingly bizarre over time. I loved the way it would morph. It also boasts a pretty cool gimmick. While CGI is certainly present, “The Bone Snatcher” balances that with (excellent) practical effects. Hell, I think the majority of the time, the beast is merely a dude in a monster suit…but what a monster suit it is! I will say I was disappointed with the final revelation as to what it was, but the origins did feel at home with the creature feature throwback angle. While “The Bone Snatcher” is never scary, it does a decent job at building atmosphere and designing some intense scenarios. The night attacks are nail biting and it even got a few jumps out of me. I really dug the desert location, which provided minimal sets, but the cinematographer used them for maximum impact. There’s something haunting about these sands and the unease is magnified by the condition that the victims are left in. Something about bloody bones half buried in the dirt creeps me out. There is ‘one’ off moment where the mine resembles a toy model, although I suspect that was just a failed shot as there are moments where the mine is clearly full sized. Still, at least that brought a chuckle out of me…unlike “Nine Lives“, where everything looked cheap and mundane. 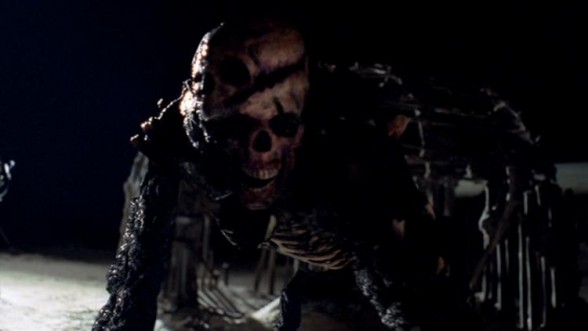 The editing is a mixed bag. The good news is that the film moves fairly quickly, while not hurrying itself too much. While yes, the remnants of the love triangle subplot are still there for some reason and I wish a lot of the banter was removed, “The Bone Snatcher” still has a nice flow. It begins with the humans hunting the killer and when that starts to get old, it shifts its focus to the humans being stranded in the desert with the monster. When I got tired of that, the characters leave and try to find help while fending off the menace. When that ran its course, the siege of the mine begins. The ending drags on a bit, but otherwise I was never bored. Although once again…I had just witnessed ”Nine Lives”, the anti-entertainment…yet the editing really does fail when it comes to the majority of the attacks. It’s just a compilation of abstract images quickly cobbled together. In fact, there are random times when we see visions of an attack for no reason, but I suspect that was just padding. So the editing was solid as a whole, but choppy when it came to various individual scenes.

“The Bone Snatcher” is not a good movie, but I don’t want to say it truly fits my definition of bad. I didn’t enjoy the majority of the character interactions because it was forcing relationships down my throat while primarily providing lots and lots of yelling. Some of the editing reeked as well, even if the overall film was reasonably well paced. Yet I dug the monster, the locations and the cinematography. There was a decent amount of suspense, even if the movie is never frightening. I think the main reason I appreciated “The Bone Snatcher” though is that at the absolute least, it gave me what I want out of a creature feature. Or maybe I should say it gave me enough. I’m definitely a mark for this movie and it was competent enough to keep my interest…even though once again, that doesn’t make it a very strong film.

Nudity: None. There is some talk of sex.