(Written and Directed by Lo Wei) 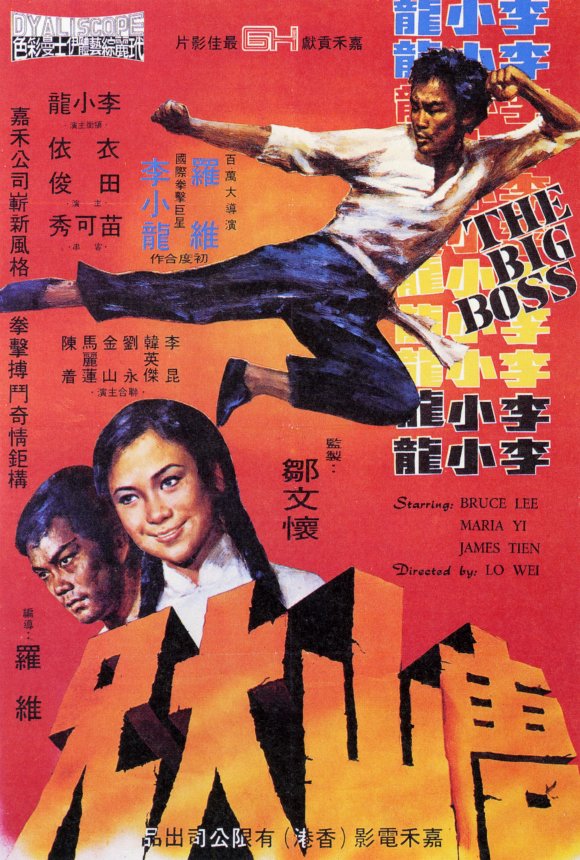 Plot: Cheng Chao (Bruce Lee) travels to Thailand for employment, but discovers a conspiracy amongst his employers, complete with drugs, forced prostitution and murder.

When I sleep at night, I have vivid nightmares surrounding me trying to explain the controversy surrounding the “The Big Boss“-“Fists of Fury“-“The Chinese Connection” fiasco. When I wake up, I take comfort that I would never really have to talk about it. But then I roll over and in true horror movie fashion, a copy of “The Big Boss” stares at me- it’s cold dead eyes piercing into my soul. I let out a loud shriek as the screen suddenly turns black. I only feel compellws to discuss this because you might get confused, so let me take a deep breath and here we go. *breaths in* ‘Duetoamistakebythedistributors”TheBigBoss“wasreleasedas”FistsofFury“intheUnitedStatesThiswas problematicas”FistsofFury“wasanotherBruceLeemoviesothetitlewaschangedto”TheChineseConnection“Deadhookersplaguemycloset. Got all of that? Bruce Lee’s cult status following “The Green Hornet” TV show gave him enough credibility to get “The Big Boss” made, even though very little money was being put into it (even by Hong Kong standards). Looking back at the feature, it’s not very good. But it was a GREAT starting vehicle for Bruce Lee.

When Cheng (Bruce Lee) arrives in Thailand, he’s promptly reminded how he made a promise to his Mother that he wouldn’t get into any fights. It sounds simple enough, but it turns out that EVERYONE in Thailand wants to get their asses kicked by the guy. He’s not there for five minutes when thugs start harassing future-temporary-starlet Nora Maio (cameo only), causing Bruce Lee to twitch angrily. Then they bully a kid and eat his treats. The audience wrings their hands in anticipation, waiting for Bruce to snap and start kicking ass and finally…Hsiu Chien (James Tien) shows up to fight them. Oh…okay. It has been alleged that Tien was originally intended to be the star, but when the original director was canned, Lo Wei sided with Bruce. This might explain why Tien’s character dominates the majority of the first 30 minutes. Bruce Lee is there, but he often feels like a stand-in for the audience, witnessing all of the events, but not interacting with them. The choreography involving Tien is pretty shoddy, with him flailing around clumsily, dropping his hands and delivering sloppy techniques. At times, I wondered if this was some sort of parody of movie-fu, which Bruce wasn’t apparently a fan of. I’m not sure who is to blame. Tien can’t be this unskilled, otherwise he would’ve never made it in the industry. Either the production was so small scale that they had no real time to choreograph these fights, or they wanted them to be so shoddy that it would make Bruce’s combat sequences seem that much more epic.

Lo Wei’s direction ranges from bizarre to minimalist to clever, although how much was edited or changed by the distributors, I’ll probably never know. His most stand out moments come from his contrasting both the lifestyles. The villains have a banquet, while the sympathetic workers eat scraps. It’s nothing original, but it was executed with finesse. For the most part, he just points the camera and will occasionally zoom in for dramatic effect. I liked how scenes were staged and the touches of style enhance the action instead of distracting us from it. The distinctly 70’s music is completely upbeat, which is pretty ironic considering the grisly deaths that are occurring on-screen. The editing is crude, although it’s no rougher than what was commonplace within the genre at that time. Scenes abruptly transition to the next with no sense of timing or rhythm, which is especially hilarious when it shifts from ‘tragic’ to ‘light hearted’. The same sound effects continue to be used whenever someone does anything. When someone grabs or throws somebody, it sounds exactly like a punch. Sometimes they are put in the wrong places, like when the main villain slashes Bruce’s stomach, but the ‘whoosh’ suggests he missed. Once again, I’m not sure who to blame. Maybe Lo Wei lacked the resources to make a cleaner looking film, maybe he didn’t care enough or perhaps the post-production people had no idea what they were doing. I don’t know! The dialogue sounds completely unnatural, although that maybe be due to the dubbing. Speaking of which, the dubbed version provides lots of unintentional laughs. They’re saying the lines, but they don’t seem to be ‘acting’ and there’s little attention to matching the words to the moving mouths. In fact, Bruce Lee clearly says something at one point, but the dubbers must’ve not noticed as no sound comes out.

But do you know what? I wouldn’t change a SINGLE thing about this movie, nor would I correct any of the flaws. Yes, despite all my bitching, I adore “The Big Boss“.

Even though James Tien is doing everything early on, Bruce still manages to steal the spotlight. He says little and does even less, but we’re always drawn to him. When he suddenly explodes into action and becomes the protagonist, he’s amazing. You see, the poor production values and crummy choreography ultimately magnifies his presence, making him seem even more awesome. Compare this to “Enter the Dragon“, which is easily the superior movie, but Bruce has to compete with the other charismatic actors, the superb set pieces, the epic cinematography, etc. Here, you practically have to focus in on Bruce himself and since he’s great, the film seems better than it really is. The fighting reflects this, with “The Big Boss” introducing us to Bruce’s practical style. For the most part, he’s just kicking, but the techniques seem incredibly authentic. You can practically feel every hit connecting, although the lack Bruce’s trademark battle cries is regrettable. But the choreography in Bruce’s fights seems so much more advanced, when compared to Tien’s. But without that comparison, would Bruce’s simplistic style look so impressive? Probably not. I do wish the fights were less one-sided. Even the antagonist is forced to cheat before providing a match, although I did like how much Bruce’s grounded style contrasted with the more traditional kung fu of the villain. It was a neat aesthetic, if anything. Finally, this is likely Bruce’s most fleshed out character. He’s pretty much playing the perfect hero in “Enter the Dragon” and a wrath filled avenger in “Fists of Fury“. Both of those roles were relatively one-dimensional. “The Way of the Dragon” gave him more to do, but his only weakness was his naivety. “The Big Boss” provides a very faulty protagonist. It’s petty anger that causes him to break his vow and it’s unclear whether he would’ve done it to protect his friends. He’s prone to temptation and corruption, ultimately selling out. Even before he starts to develop, he falls victim to the 7 deadly sins and by the end of the movie, I was still questioning whether or not he was heroic. It was a good role and his performance was impressive, even if the dubbing was pretty bad.

Make no mistake, “The Big Boss” is NOT a good movie. But the badness, mixed with the weirdness, creates an eccentric atmosphere that I personally found appealing. Yet more importantly, it’s weaknesses contributed to Bruce’s strengths, enhancing his effectiveness. That is way I like “The Big Boss“. It’s one of the more forgotten entries in Bruce’s filmography, probably due to the title controversy and the fact that Bruce’s movies got better. But it was a huge success in China, becoming the highest grossing movie in that country of all time. It gave China a hero, an action star who would conquer racial boundaries and pwn the western market. Unfortunately, this last success didn’t occur until after Bruce’s untimely death. “Fists of Fury” is often considered to be his best film and technically, it is a vast improvement over “The Big Boss“. However, I remember considering it to be overrated, because Bruce’s style doesn’t have room for ‘new’ techniques and gimmicks. I’ve also never cared for the racist overtones. It’s still good though. I love “Way of the Dragon” and especially “Enter the Dragon“, but dislike “Game of Death” (which doesn’t even count). I’ve yet to see “Marlowe” or his other ‘bit part’ roles, but I did watch “Circle of Iron“- which he had helped write. He had also planned on starring, but the project fell apart and was later re-tooled as a David Carradine vehicle. It was pretty weak, although apparently it re-written extensively, being a mere shadow of what Bruce had envisioned. “The Big Boss” only served as a stepping stone for greater things, but it’s a stepping stone that I have great affection for. Hugs and Kisses!