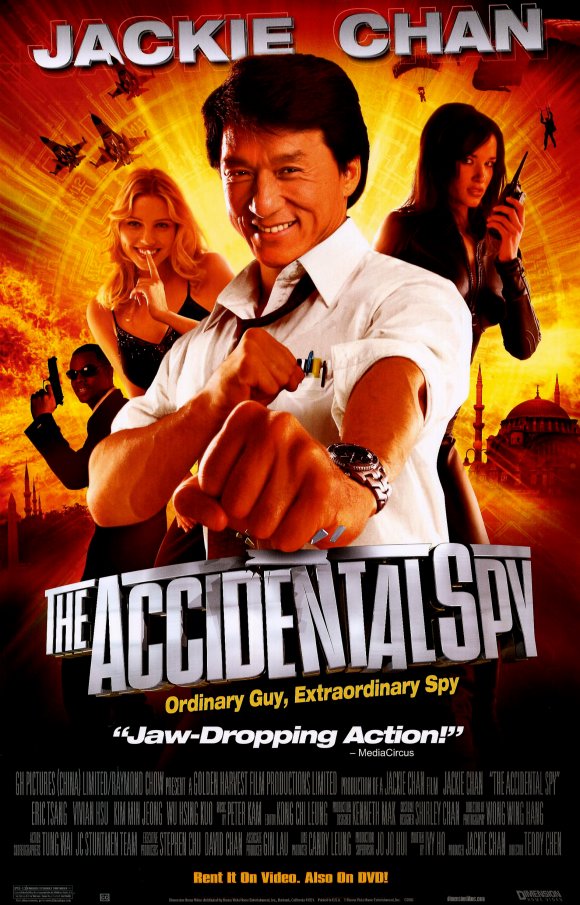 (Note: Who the hell are these people in the poster? Aside from Jackie, they don’t appear in the movie!)

Plot: Oi, this is going to be difficult to describe in a nutshell. Jackie Chan (Jackie Chan; obviously I watched the dub) has a boring job and has nightmares about his parents, who abandoned him as a child. He discovers that his Father was an ex-agent who was caught up in some crazy shit, and Jackie is about to get dragged into that crazy shit.

I remember seeing “The Accidental Spy” when it first came out on VHS in the states. Only two things about it stayed with me for all of these years. The first was my disappointment in the film. I couldn’t remember why, but it did nothing for me. The second was that scene where a bunch of gay, Turkish gangsters are chasing a naked Jackie Chan in the streets of Turkey, trying to see his junk. I mean, I presumed that was the context of this sequence. After all, Jackie kept grabbing things to cover himself up with, and they kept tearing it away. They must’ve really wanted a good look at his penis! Now that I’ve viewed “The Accidental Spy” again, I’m pretty sure history will repeat itself. A few years from now, I’ll only remember my disappointment and those gay, Turkish Gangsters trying to get a peek at Jackie’s wang. Why? Because everything else in “The Accidental Spy” is just kind of dull…

Your average Jackie Chan fan will criticize “The Accidental Spy” for the lack of quality fight scenes, but I am not going to be your average Jackie Chan fan. I will say that if this was made 10 years earlier, there probably would’ve been a lot more kung fu, high octane stunts and stronger choreography. It probably would’ve been a much better movie, but I don’t think it’s fair to hold that against “The Accidental Spy”. I’m sure even “The Medallion” would’ve been watchable had it been made 10 years prior. Jackie was already getting old by this point and had to slow down so he didn’t…you know…DIE. That’s not to say this is devoid of action. There are a handful of fights and honestly, I thought they were pretty decent. Are they anywhere near being some of Jackie’s best? No way! But the gimmicks, exotic locations, humor, use of props and Jackie’s athletic abilities do make the battles rather entertaining. They mix up the action quite a bit too, adding in car chases, a shoot-out and an epic finale involving a gas truck as well. There’s nothing exceptional about the action in “The Accidental Spy”, but it’s more than acceptable. So why am I not a big fan?

Because there was less emphasis on action, that means the movie has to rely more on the plot. The plot just wasn’t very interesting. Even the plot didn’t seem all that interested in the plot, as it kept diverging into other subplots. The first part of the story is actually kind of compelling, where Jackie searches for his Pa’s money. What follows is some action involving those gay, Turkish gangsters. Those guys get quite a bit of screen-time, but then are removed from the plot anti-climatically. Later on, the main villain of the plot is removed anti-climatically and he isn’t even THAT detestable. Oh, he got the poor girl addicted to drugs? Unless he forced her- and it’s implied he didn’t- I think the blame lies on her shoulders. Speaking of which, what in the hell was with that subplot? It was a tone killer and wasn’t needed at all. Her dialogue was also pretty bad. The finale is funny because it had nothing to do with the plot. The story had resolved itself by then and the gas truck thing was pretty much an after-thought. It’s like the plot was more interested in the events that had little to do with the plot! Weird!

There might be a good reason for all of this though. Well, let me backtrack a bit. When I say the villain isn’t that detestable, he technically is. He has a bunch of people gunned down earlier on, but the movie sort of forgets about that and we’re supposed to hate him more for what he did to the girl. But even worse, he’s kind of boring too. What is his goal? To get some new, super drug. That’s not very exciting…However, I watched the dubbed version. In the original version, Jackie Chan’s character is named Buck Yuen and he’s not trying to stop a new drug from entering the world. Instead, he’s trying to stop a new form of Anthrax. Now that is more interesting! I was aghast as to why they’d change this until I noticed when it was released. After September 11th, 2001, there was a pretty horrifying Anthrax scare in the United States. Just like how “Spider Man” wisely removed an action scene that took place on the World Trade Center (anyone else remember that teaser?), the distributors of “The Accidental Spy” figured it would be more tasteful to change the threat from Anthrax to drugs. Still, I wish they could’ve changed it to something more terrifying. Maybe it’s because I don’t have too much sympathy for junkies? I don’t know. Also, I think they removed a back-story about how Jackie Chan’s character was a former detective. I do recall one line revealing how he always wanted to be part of law enforcement, but I was under the impression that this line was intended to be more about his future than his past. Regardless, everything about the original version sounds more compelling than the one we got in America. I wish I would’ve saw that instead…Anything I can say about the acting? Jackie’s delivery is pretty stiff, although I suspect his dubbing is more at fault. His facial expressions and body language seemed fine, but his (dubbed) voice felt detached. Jackie does do his own dubbing, but this time, it kinda backfired. Everyone else is fine, I guess. It’s hard to say with the dubbing, but no one stood out as exceptional or weak. Eric Tsang makes an appearance and he’s a lot of fun, but I wish there was more of him. 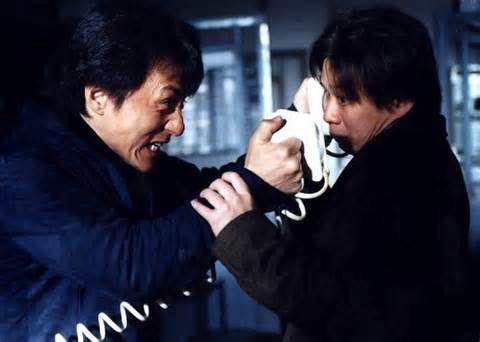 But regardless, I just felt “The Accidental Spy” relied too much on an uninteresting plot and the excessive filler didn’t help things. The action was fine, but it wasn’t the primary focus. I have nothing against that idea. I loved “Little Big Soldier”, which was more of a drama than it was action. But that film had an exceptional script, which this did not. If I had to blame anyone, it would be the screenwriter for delivering such a weak screenplay. Although even then, I don’t know if it’s really Ivy Ho’s fault. The dubbed version was written by a dude named Rod Dean. Maybe Ho’s original version was pretty good, but he ruined it? I don’t know. But “The Accidental Spy” was not able to keep my attention. If only the plot was changed into something like: A bunch of gay, Turkish gangsters venture out to see Jackie Chan’s penis. Now that is a story I can get behind.

Overall: “The Accidental Spy” is not one of Jackie’s stronger efforts, but go ahead and give it a look if you’re a completest.