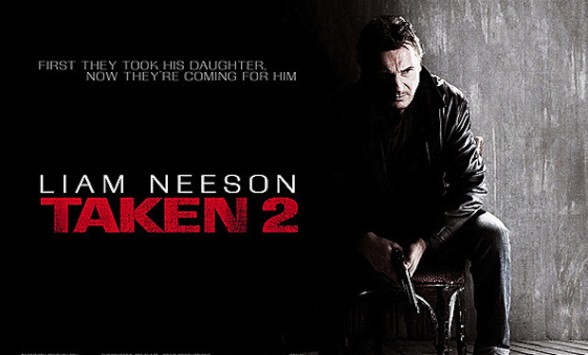 Plot: When Bryan Mills (Liam Neeson) killed everyone who tried to sell his daughter (Maggie Grace) into sexual slavery, he didn’t realize that they have some angry relatives who want vengeance. When Mills, his ex-wife (Famke Janssen) and daughter take a vacation in Istanbul, they use this opportunity to get their revenge. But do they really know who they’re messing with?

I had no idea that they went ahead and made “Taken 2” until I saw its trailer attached to “The Bourne Legacy“. My reaction could be more-or-less summed up as “seriously?! The first one needed a sequel?“. But the more I thought about it, the more my heart began to soften. I remember seeing that first teaser for “Taken” and being so impressed. It looked like it would be a great movie, but it wasn’t the cinematic art I had hoped for. Well, unless Liam Neeson going from scene to scene, beating people up is high art to you. It took me some time to realize it, but that more-or-less fits my definition of high art. Since Liam Neeson is awesome, the movie worked even though I felt there was a lot more potential that was wasted. Part of me hoped “Taken 2” would explore those missed opportunities. It didn’t. “Taken 2” offers nothing new and the filmmakers seem to have forgotten why its predecessor was a success.

If you aren’t going to develop an inspired story, then at least have the common decency to be a stellar rehash! The first thing you will notice is how slow the first act is. Lenore is divorcing her husband, which now makes her the resident love interest. Kim has a boyfriend. Mills is trying to be the proper Dad and getting her on track by…having her get her drivers license? Seriously, that’s also going to be the end-cap too. It’s plays like a soap opera, but even more syrupy as everything seems…too nice. The ex-wife was a total bitch before, but now she seems overly amicable. The filmmakers almost want to make the daughter rebellious, but then they don’t. Maybe it’s because he saved her life and it would make them very unsympathetic if they treated him poorly. But something just felt wrong about this earlier scenes. They had no edge. Either way, it was boring and cheesy. I was just begging for someone to get…taken. Although while we’re at it, the verbal allusions to the first movie aren’t as heavy handed as they were in the trailer. Thank God! 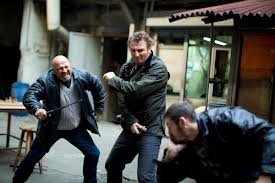 Then Mills and Lenore are…taken…but not before he contacts Kim. The next segment of the movie is Mills instructing Kim to do things that will help him get control of the situation, while we wonder how stupid the villains must be to leave him alone to do this. Then Mills and Kim team up, which also leads to an absurd chase scene where Kim out-drives some cops in their own turf. Was the first movie this dumb? After that, Mills has to dispose of the human trash and all suspense dissipates. You see, one thing this movie did right is the villains are established as cruel, intelligent and dangerous. But as the movie moves along, they become increasingly incompetent and easy to take out. I liked how “Taken” was the opposite. It started off easy for Mills, but became progressively more difficult as he moved up the food chain.

“Taken 2” does still deliver solid action. The car chases and gun battles were well done and there is one really good fight scene near the end. Granted, it’s pretty sub-par when you consider that it cost $80,000,000 to produce, but I didn’t think the first one had great action either. It’s acceptable, if a bit uninspired. At least the action was more comprehensible, as the editing is not as tight and the camera stays still. Istanbul is an ironic location because the landscape shots are gorgeous while the insides of the city look pretty destitute. Eventually the beauty of it starts to fade because we get used to the scenery. Luckily, Liam Neeson is still freaking awesome so the movie survives on that alone. 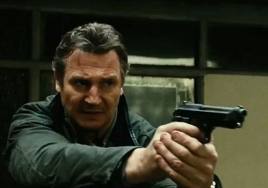 “Taken” wasn’t inspired or inept, but it thrived on its simplicity. It wasn’t about the script, direction or even the action. The movie existed to showcase Liam Neeson’s ability as an action star. He burdened the films success or failure. Had “Taken 2” emulated that structure, perhaps it would’ve been an enjoyable rehash. Maybe if they opted to deliver more high octane action or a complex story, it could’ve been an improvement. Unfortunately it aims to be the former but then muddies the waters by adding too much melodrama. I don’t want to see his daughter do things that only he should do. I don’t care about his ex-wife’s problems as I still haven’t forgiven her for being the weakest link of the previous movie. I want to see Liam Neeson spanking bad guys! The filmmakers are all competent, so it doesn’t necessary suck. But “Taken 2” was clearly made for financial purposes, not because of legitimate inspiration. Still, at least it was better than “The Cold Light of Day“, the most mediocre movie of all time. It’s also not as forgettable as “Unknown“, one of Liam Neeson’s previous features. But if you want a REAL actioner, watch “Dredd“. If you want something spectacular, watch “Looper“. Those films deserve the big bucks much more than this. Yet “Taken 2” will probably gross more in its opening weekend than those movies will make in their entire run while people will wonder why cinema has gotten so hollow.

Nudity: None, but there is sort of a threat of rape.

Overall: If you’re a die hard fan of the first film, you’ll watch “Taken 2“, regardless of what I say. Just keep mild expectations and don’t pay full price. If you didn’t care for “Taken“, then don’t bother with the sequel.