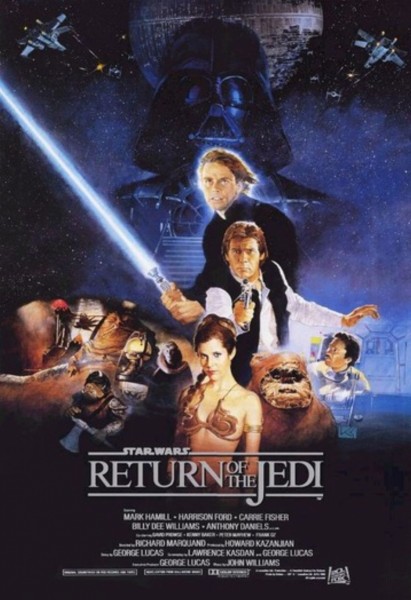 Plot: The Galactic Empire has begun construction on a new Death Star, with the Emperor (Ian McDiarmid) personally overseeing the project. The Rebellion sees this as the perfect opportunity to strike, so Leia (Carrie Fisher), Han Solo (Harrison Ford) and the others infiltrate their defenses in order to exploit a potential weakness. Meanwhile, Luke Skywalker (Mark Hamill) has nearly completed his training to become a Jedi Warrior, with his powers reaching incredible heights. Unfortunately, this makes him vulnerable to the powers of the dark side and the Emperor has grand plans to corrupt him…

It’s funny how ones cinematic tastes change between adolescence and adult hood, as “Return of the Jedi” was my favorite Star Wars flick when I was a kid. Perhaps foreshadowing my eventual disillusionment though, I could only remember the Ewoks, speeder bikes, Jabba the Hutt and finale. The entirety of “Star Wars” and “The Empire Strikes Back” have always remained snugly within my memory, so I was a pretty stupid kid and not only because I watched “Godzilla’s Revenge” religiously. As an adult, I agree with the consensus that “Return of the Jedi” is good, but not AS good as the others. But I can see why it would strongly appeal to a younger demographic, as the tone is lighter, while retaining a sharp enough edge to keep us kids feeling like we’re older than we really are. Furthermore, “Return of the Jedi” does continue being a worthy sequel by introducing more memorable alien races, powers, costumes and vehicles, while providing much of the old awesomeness. The characters continue to smoothly progress in their development, the score is amazing and as a Star Wars fan, I was satisfied. The problem is that…”The Empire Strikes Back” had better editing, cinematography, direction, dialogue, acting and everything. It set the bar so high that I have to be careful not to sound too negative when speaking of the third entry, as “Return of the Jedi” feels so inferior in comparison- even though it’s pretty good in almost every way. Then we have the Ewoks and this is the first sign that Lucas had become more interested in merchandising than storytelling, although the end result is…complicated. Definitely avoid the special edition, as the new effects are distracting and Darth Vader’s “NOOOOO!” is terrible.

“Return of the Jedi” might not be my favorite Star Wars movie, but it does include my favorite portrayal of Luke Skywalker- who has become the embodiment of a true Jedi…OR HAS HE!? When he debuts with that black cloak and green light saber, while using the force to sway and choke people, his presence alone impressed me. He carries the mystique of Obi Wan, but the narrative makes it clear that his arc is not complete. He’s much more mature now, but there’s still a darkness within him that can be exploited The Emperor (Ian McDiarmid) is a major reason for this conflict, as he’s so deliciously evil and his manipulation is so intense that he arguably becomes more threatening than Vader. Darth Vader is awesome, but I don’t think Luke’s potential corruption would’ve worked if he was the mastermind. The Emperor is creepy and menacing, but not in the cool way that made Vader so popular. Speaking of which, I really liked Luke’s quest to redeem Vader, who showed subtle signs of caring for his son in the last movie (so it’s not an asspull). I found the redemption storyline to be satisfyingly fleshed out and its resolution moved me. I did feel like Leia (Carrie Fisher) and Han (Harrison Ford) got a little lost in the shuffle at times, even though they’re still relevant. Of course, we finally learn that Luke and Leia are siblings and somehow their past kisses become even more awkward when Leia reveals that ‘she’s always known’. Um, ew? Interestingly, C-3PO (Anthony Daniels) gets more to do and I liked how the rest of the cast was utilized. Everyone has an important part to play, but the focus is on Luke, Vader and the Emperor. If I have any (minor) complaints, I found it strange how Han is the centerpiece of the opening act, but becomes just another piece throughout the rest of the movie.. The acting is good, although the actors and actresses occasionally struggle with the dialogue. Don’t get me wrong, there are plenty of great lines, even though “The Empire Strikes Back” was more quotable. But every once in awhile I would plug my nose in response to the crap that was coming out of peoples mouths. Of course, this bad dialogue is merely foreshadowing things to come…

And then the Ewoks show up…

I do think the Ewoks are adorable and I’ll concede that when we saw one die, I felt sad. I didn’t find them particularly annoying either, with C-3P0 and especially Jar Jar Binks reaching far more annoying heights. However, they do not mesh very well with the rest of the movie. They disrupt the flow of the narrative, with all of their scenes feeling like glorified padding, which caused the pacing to be choppy. The tone struggled to maintain any sense of consistency because one scene would be a dramatic confrontation between Luke and Vader, but the next would follow the wacky antics of these cuddly little monsters. It constantly took me out of the moment and I would struggle to adjust to the shift. I’ve heard different reasons as to why the Ewoks were included. Some say it was a merchandise ploy, as the kids would want the toys. Lucas says that Wookies originally would’ve filled these roles, but he wanted a more underdog approach to the final battle. Apparently critics at the time had complained about “The Empire Strikes Back” being too dark, so the filmmakers added them for some extra humor and cuteness. I think most explanations have a certain amount of truth to them, but the Ewoks did not belong in this narrative- even if I adored them as a kid and can tolerate them as an adult.

“Return of the Jedi” has good effects and is a nicely crafted feature, but something about its visual style doesn’t feel right to me. Perhaps the filmmakers came to the conclusion that there was no way they could top the first two Star Wars films in spectacle, so chose to go the complete opposite route. If “Star Wars” took us out in the open, using wide shots to create an epic feel, then “Return of the Jedi” will be claustrophobic. Whether we’re seeing Jabba’s overcrowded, seedy layer or the isolated, cold steel of a Battle Cruiser, there is always this creepy feeling that we’re trapped in a small set. Even the exteriors are angled in such a way that seems oppressive. If “The Empire Strikes Back” allowed us to explore its universe, showing many different, colorful and flashy planets, then “Return of the Jedi” will re-use the more mundane locations or make Endor resemble your everyday forest. Seriously…that planet is just a forest…Maybe these were all artistic choices, but I can’t help but feel a little underwhelmed by the visual style. The director films action scenes in a way that draws attention to the awkwardness of the special effects, some of which have aged very poorly. On the other hand, “Return of the Jedi” boasts some of the best special effects in the entire trilogy, such as the Rancor. That thing looks amazing and terrifying, although the Sarlacc is also quite effective. So the SFX either hit or miss, with little in between. Marquand also provides some of the most poetic moments of the entire franchise, especially during the finale. The action isn’t necessarily AS exciting, but the drama is perfect. I loved how Luke’s face will be partially hidden in shadows or the symbolic use of his robotic hand. You really feel the emotion even though the dialogue is shockingly minimal.

I do still like “Return of the Jedi” and consider it to be a good movie, even if it doesn’t always appeal to my sensibilities. I simply prefer how the other movies were written, directed, shot, scored, edited, etc- although I do stress that these aspects are still solid. As a Star Wars fan, I was happy, if a bit underwhelmed. The Ewoks became insanely popular and despised at once, spawning a TV show and two spin-off flicks. As a kid, I recall enjoying “Caravan of Courage: An Ewoks Adventure” (terrible title), although I’m not entirely sure I’ve seen “Ewoks: Battle for Endor” in its entirety. I’m tempted to revisit them, but I hear they suck and I can only remember bits and pieces, which is not a good sign. The funny thing about the Ewoks is that while we might complain about them, they have become an iconic representation of Star Wars lore. EVERYONE, even those who have not seen the movies, knows about these man-eating teddy bears. I believe that they had a negative impact on the narrative for “Return of the Jedi“, but they certainly had a positive impact on George Lucas’s bank account. Can we say the same thing about Jar Jar Binks? I’m a little sad that my exploration of the original trilogy has come to an end though, especially as I must now deal with the prequel trilogy. I suppose I could always postpone that in order to (re)-review the “Star Wars Holiday Special“….

F@ck that! Prequel trilogy it is!

Violence: Rated PG, but it is incredibly violent for that rating.

Nudity: None, but Princess Leia in that bikini was very risque.

Overall: “Return of the Jedi” is good, but it’s also the weakest of the trilogy.