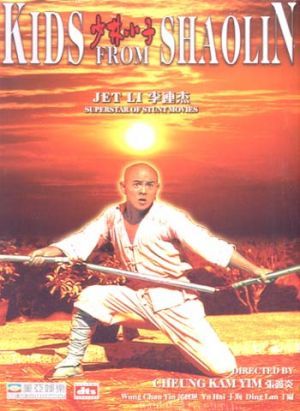 Plot: A Monk (Yu Hai) trains a group of orphan boys (led by Jet Li) in the art of Shaolin across the river of a Wu Tang master (Cheng-Hui Yu), whose daughters train under him. The families are rivals, but must learn to work together when a much more sinister threat targets them both.

I did not like “Kids from Shaolin”, but I guess I’ll start with what I did appreciate. The scenery is pretty, even if it does become a little tiresome seeing the same locations used over and over again. The fight choreography is definitely on the money, despite the directors’ obsession with filming them in the dark so we can’t really make out the majority of the techniques (sigh). Still, there is enough diversity to make up for this. I like how you can tell the differences between the Shaolin and Wu Tang styles. The fights generally have a comical edge (possibly inspired by Jackie Chan) and they work more than not. The kids are insanely acrobatic and get plenty of opportunity to show off their skills. Even though Jet Li is great as always, “Kids from Shaolin” is a little bit more of an ensemble piece even though he is technically the main character. He doesn’t get the chance to really impress us like he did in its predecessor. Personally, I was mostly amazed by Qiuyan Huang’s performance as the bitchy tomboy. For some reason, women using this kind of kung fu tends to look fake in film. Yet this gal sold her abilities like a master. “Kids from Shaolin” gives women and children more to do as ‘action performers’ than the usual genre flick. So that’s nice.

Yet everything comes together for the spectacular finale. Dozens of bandits- some having some notable skills themselves- flood the Wu Tang mansion and all hell breaks use. Everyone uses plenty of different weapons, although my favorite part has to be when two characters battle with three sectioned staffs. I’ve always had mixed feeling towards that weapon, never totally understanding its practicality while thinking it’s sort of boring to watch in film. Yet “Kids from Shaolin” somehow made it awesome. It’s funny when they start getting entangled, but the fighters never miss a beat and continue to use fancy attacks in spite of this handicap. The choreography is fast, furious and highly advanced. It almost made the rest of the movie worth sitting through. The key word being ‘almost’.

It’s not that “Kids from Shaolin” ever becomes bad, but I do believe the movie is just too…I dunno…Chinese? I know what you’re thinking: “But MartialHorror, aren’t Chinese movies supposed to be Chinese?“. Oh wait…I guess I never thought about that. My bad! Actually, this is going to be difficult to explain, but I do believe my disdain towards “Kids from Shaolin” is merely a cultural thing. Remember how in “The Shaolin Temple“, Jet Li accidentally kills and consumes a dog? I noticed that the dub changed the dialogue to suggest that it wasn’t the dog he was eating. Why? Because Westerners don’t like the idea of eating dogs, which is not a big deal in China. That is a cultural difference. Yet that was one scene, so even if you were offended by it, at least the rest of the movie had universal appeal. “Kids from Shaolin” lacks said universal appeal. It’s one cultural difference after another, which will alienate a lot of western viewers.

“Kids from Shaolin” is a kids movie, but it’s too dark to be considered as such in the west. Bouts of childish humor are mixed in with graphic violence, murder and talk of rape. Honestly, I’m personally not fazed by the violence, murder and (talk of) rape, but the ‘childish humor’ part terrifies me. I’ve never particularly enjoyed Chinese comedies. They’re just too over-the-top for my tastes. Even Jackie Chan classics such as “Police Story” tend to give me headaches whenever characters start shrieking and yelling for comedic effect. Your casual Chinese audience will find this to be hilarious. I find it to be annoying. “Kids from Shaolin” is VEEERY heavy handed with its comedy. Characters are constantly yelling and shrieking at each-other and the noise never seems to stop. Other distinctly Chinese aspects also bothered me: Such as when characters break out in song. Where I’m from, musical numbers only appear in musicals. But I have seen a handful of Chinese productions (such as “Come Drink with Me“), where characters randomly start to sing. It’s more common than people realize, but “Kids from Shaolin” has enough songs to almost qualify it AS a musical and I’m not a fan of that genre. The most shocking moments come from the Child nudity, especially when a character starts to rub his face against an infants penis. In the west, this is VERY unacceptable, whereas the East doesn’t have an issue with it as it’s not intended to be sexual. I do understand the logic, but this doesn’t make it any more awkward for this silly westerner to sit through. Even though there is a decent amount of fighting on display, I wouldn’t call “Kids from Shaolin” action packed. The majority of the screen-time is dedicated to the wacky antics of children, silly misunderstandings, goofy mugging and singing. It takes everything I dislike about Chinese cinema and beats me over the head with it, even though once again: That doesn’t make it bad.

I don’t want you to think that all movies HAVE to have western appeal. There is nothing wrong with making “Kids from Shaolin” a kid flick designed exclusively for Chinese audiences. For me to damn that would be even worse than someone whining about a slasher film for being too much of a slasher. But what do you expect me to say about this? Do I lie and pretend I enjoyed it? I can’t bring myself to do that. So just because I disliked it, don’t automatically presume that makes “Kids from Shaolin” a failure. Oh sure, it does have some objective missteps, like how there are too many characters which diminishes the screentime of the other, more interesting characters. That, and I personally felt that the filmmakers shouldn’t have just taken the side of the Shaolin students (the Wu Tang group is clearly in the wrong). I think it would’ve been a stronger story had both clans been morally ambiguous. But that just potentially keeps it from achieving greatness. “Kids from Shaolin” is full of content that Chinese folks should be cool with, but your average westerner won’t understand the appeal (of course, there are always exceptions). I love many Chinese movies, their kung fu films classifying as one of my favorite genres. But this reminded me how the majority of Chinese flicks that get released over here are chosen for their universal appeal. It’s not very easy to find the Shaolin Temple trilogy- despite showcasing Jet Li at his prime- and I suspect this is why. So let me end with this: I didn’t get “Kids from Shaolin“. That’s more on me than the movie itself though.

Violence: Rated R worthy, although I don’t know what the actual rating would be. It deals with death and there’s even some blood geyser action. As a kid, I myself might’ve loved this.

Nudity: We see an infants genitalia and a few kids backsides. Rape and sex is discussed, but no one ever gets around to it.

Overall: I would’ve liked “Shaolin Temple 2: Kids from Shaolin” more had I just fast forwarded to the ending, but whether or not you should do the same depends on “you”. Consider what’s been said and make your decision.