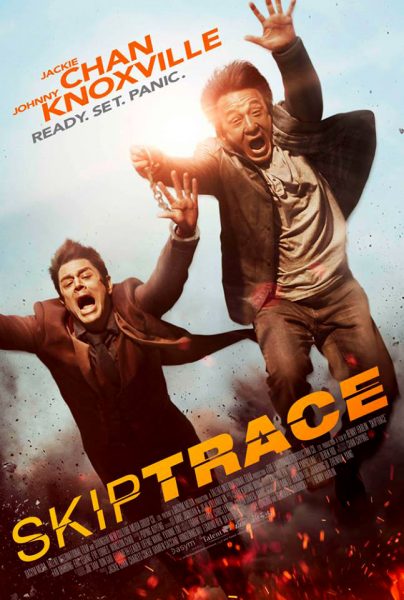 Plot: Connor Watts (Johnny Knoxville) is a con-artist who witnesses a murder committed by the notorious criminal Victor Wong (Winston Chao), whom Detective Bennie Chan (Jackie Chan) has been investigating. Through a series of contrivances, they form a reluctant alliance to survive and bring Wong down.

While I admire the effort to forge a working relationship between Hollywood and the booming Chinese film industry, I can’t help but feel like there is a lack of chemistry amongst…I don’t know, the countries? The film industries? The production studios? Jackie Chan seems to be the pioneer here and from a business perspective, his recent international ventures have been huge successes. But “Dragon Blade” was a mess, probably because it was trying to satisfy the expectations of both markets and it ended up feeling like two vastly different movies were at war with each-other for control over the narrative. Despite grossing a buttload of money in China, I suspect that Jackie was disappointed that the film didn’t make waves in the United States, as “Skiptrace” seems like a much more desperate attempt at conquering the American Box Office. I didn’t think “Dragon Blade” was a good movie by any stretch of the imagination, but you can tell that it was a passion project that tried to be something more than just an action epic. “Skiptrace” is just a blatant attempt to recreate the winning formula of “Rush Hour” and ESPECIALLY “Shanghai Noon“, as those films were directly responsible for Jackie becoming a household name in the U.S. If you start finding yourself considering smashing your head against the television in response to Johnny Knoxville being his annoying Johnny Knoxville self, I recommend you try predicting what will occur three scenes later…because if you’ve seen the films “Skiptrace” is imitating, you can probably guess where it’s going long before it has gotten there. You will then feel gratified for being correct, relieved for taking your mind off of Johnny Knoxville…and then annoyed because you realize how phoned in “Skiptrace” really is.

The script is disastrously sloppy, as nearly every scene seems designed to diminish the overall product, not that they also don’t suck on their own. We’ve seen this storyline many times before, but have we ever seen it so needlessly convoluted? Fan Bingbing in many ways turns in the most emotionally driven performance, but her characters’ relationship with the narrative was toxic. She (Samantha) is the goddaughter of Benny (Jackie Chan), as her Father (Eric Tsang) was his best friend and he was killed by the antagonist as part of the back-story to this plot. Even though Benny is already obsessed with bringing down the villain for this reason and Watts (Johnny Knoxville) witnessing a crime that would help Benny accomplish this is enough to set up the overarching conflict, the writers chose to have the bad guys charge Samantha with capturing Watts, presumably knowing she would go to Benny for help? It doesn’t make sense that they’d rely on her, especially considering the predictable twist near the end. But it makes even less sense that they’d want the cop who intends to bring down their Empire to capture the guy who could potentially bring down their Empire. The writers clearly did not think this through, but I want to remind you that Benny has absolutely no idea that Watts stumbled upon a murder and doesn’t believe him when he tries to explain what happened. He’s chasing Watts because Samantha will be executed by the villains if Watts isn’t returned to them. When Watts points out that his own life will be forfeit if they get their hands on him, Benny heroically responds with ‘I doesn’t care’. That’s mildly more callous than Watts’ reaction to being told that Benny’s Goddaughter will suffer the same fate if he isn’t brought in, with Watts only changing his mind once he discovers that she’s Samantha, whom he has apparently fallen in love with after meeting her for about 10 seconds. Aren’t these protagonists so likable? This might’ve worked if “Skiptrace” was darker and edgier, but it’s far too silly for morally ambiguous heroes who aren’t called out on this shit. Why didn’t Benny just take Samantha with him anyway? He prepared her in case the villains attacked, so he must’ve suspected she would be in danger. The subplot involving Samantha escaping from the baddies, only to get captured shortly afterwards, only slowed the pacing and devoured screen-time. Why was any of this necessary? I would prefer my action comedies to have endearing characters who don’t do idiotic things, participating in action scenes that build upon the narrative! Hell, if Samantha was with Benny, I might’ve accepted the eventual redemption arc and maybe her token romance with Watts would’ve been easier to swallow. 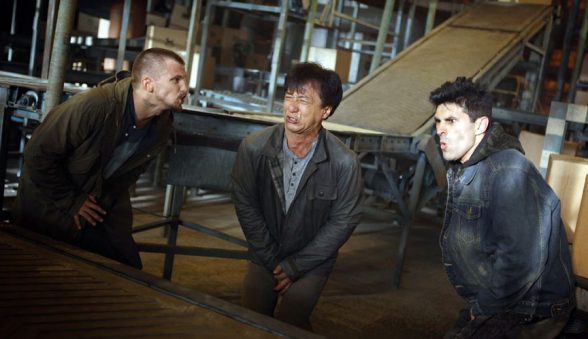 I also love how Benny is supposed to be racing against a clock before the villains target Samantha and he’s constantly reminding the audience/Watts that they have to hurry, but this doesn’t stop him from getting drunk, having philosophical discussions with Watts and occasionally participating in a musical number (!!). I didn’t find any of the humor to be particularly funny, probably because they attempt a mating between Eastern and Western comedy, which birthed uncomfortable gags. The raunchy and racy lines designed to appeal to Western Viewers will likely either fly over the head of their eastern counterparts or offend them. The broad mugging that Chinese audiences will find amusing will probably get on the nerves of Americans and the musical numbers will just confuse them. Of course- I find everything Johnny Knoxville related to be grating, so his fans might be a little more receptive. His smug dimeanor and mocking laughter made every ass-kicking he received feel very cathartic, even though we’re supposed to love his roguish ways. At least he’s having fun though, whereas Jackie just looks bored. They don’t have any chemistry and their eventual bonding was forced, with the attempts at developing Watts feeling very contrived. I will admit that the opening action set piece was impressive, thanks to a combination of strong production values, smooth editing, flashy cinematography and genuine creativity. There is a right balance of kung fu, stuntwork, spectacle and humor. But the remainder of the action never quite stood out as eye popping, even though it was consistently…OK. The choreography was solid and even though I suspect there were a few stunt-doubles, Jackie shows he’s still surprisingly agile, daring and swift. The problem is that the fighting, the stunts, the gimmicks and the humor surrounding them feel…familiar, as if Jackie has covered this territory before, back when he was young enough to make them much more exciting. I want to emphasize that I’m not whining about Jackie’s age or how he has to be a lot more cautious these days. I’m criticizing the action scenes for feeling too derivative of Jackie’s past works, which set the bar so high that any attempts to recreate them are going to be inferior. “Dragon Blade” smartly crafted choreography that felt fresh coming from Jackie, so I have no reason to compare and contrast it with his classics. Nevertheless, I doubt I would’ve criticized the action in “Skiptrace” if the comedy and writing didn’t get on my nerves so much, as the martial arts and stunts are still acceptable, just not enough to redeem its other shortcomings. At least the cinematographer takes advantage of the lush, diverse scenery of China. In fact, the gorgeous visuals caught my attention more than the fight scenes did.

Jackie Chan has become a controversial figure in recent years for his political opinions and his nationalistic pride sometimes rubs people the wrong way. This doesn’t bother me, but I remember a recent interview where he boasted about how the Chinese market was gradually surpassing its American equivalent based on the success of “Warcraft” in China, even claiming that the ‘Americans are scared‘ and ‘People around the world will start learning Chinese instead of English‘. I have no problem with these claims or even the somewhat arrogant way he made them and he’s probably correct, but I think they reveal Chans’ ambitions. If a Chinese Production crushes all the Hollywood competition at the American Box Office, it would probably cement China as the #1 cinematic market in the world. I believe Jackie wants to be the one who leads the Chinese film industry into this golden age, but “Skiptrace” is a forced attempt to make it happen. Everything about this movie feels processed, with only the cinematography standing out as inspired. But even worse, the comedy made this difficult for me to stomach, so I really did not enjoy myself. Is it necessarily the worst Jackie Chan flick? No, but I hated it so much that it might as well be. I will concede that my biggest problems tend to be a little more personal though and general audiences seem more mild than positive or negative. For this reason, I won’t say you should skip it, but keep expectations very low and don’t be too surprised if you share my hostility. On a side note, I do think that the pairing of Jackie Chan and Johnny Knoxville would’ve been a lot more interesting in their primes, as both men were fearless and maybe they could’ve come up with some memorable material.

Nudity: You see a male back-side.

Overall: I thought “Skiptrace” sucked, but it all comes down to how you react to the humor and writing, as they sunk the project for me. Will they for you? I don’t know, but don’t expect much either way.