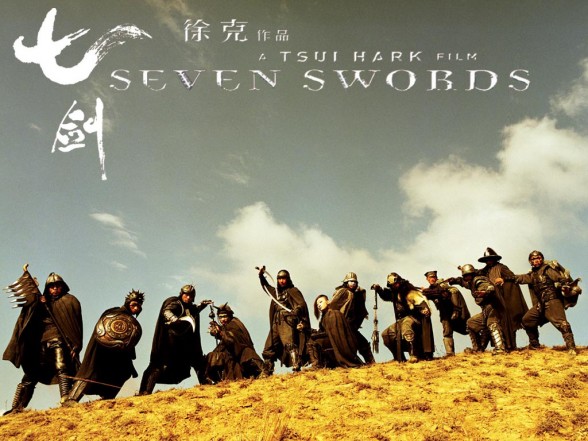 Plot: Seven warriors with mystical swords choose to defend a village against an army of bloodthirsty mercenaries.

I never will understand what directors are thinking when they produce four house epics -which apparently the original cut of “Seven Swords” was- and presume it won’t be completely butchered in order to have a manageable time. Whether it’s something respectable like “Once Upon a Time in America” or is designed to appeal only to genre fans such as “The Man with the Iron Fists” (seriously), it’s going to be considered a liability by the studios because few people will want to spend that much time in the theaters. So it’s going to be trimmed down and much of the content will be lost, dumbing down the feature in the process. You might interpret this as a criticism of the studios or distributors, but I think at this point, the directors need to take some responsibility as well. They HAVE to know that this will inevitably happen, so they should waste less time and money and rewrite their story so that it won’t be diced to pieces in post production. Or at least add a satisfying climax so you can split it into two separate films. The final cut of “Seven Swords” has earned a rather polarizing reputation. If you read through the reviews, opinions range from glowing to furious, with very little in between. Personally, I felt “Seven Swords” came from Tsui Hark’s bowels rather than his brain and I have no idea what the appeal is supposed to be. Yes, it’s passable- and sometimes even exceptional- on a technical level but it suffers from every problem which usually accompanies films that were intended to be four hours long. Everything is underdeveloped and the time is wasted on the remnants of subplots that might’ve meant something in the original cut, but couldn’t be completely omitted because they tie into the more relevant subplots, so it becomes impossible to make an emotional attachment to anything…and even though the four hour long version has been edited down considerably, “Seven Swords” is still WAY too long and I got bored. This was a miserable experience for me.

I want to be perfectly clear, I don’t expect every epic to fully flesh out and develop its cast of characters. Even though that is a re-occurring criticism directed at “Seven Swords“, I actually felt that it spent more time on its characters than…let’s say “13 Assassins” did- and I liked that movie. The problem is that “Seven Swords” doesn’t know what to do with any of these people. It’s established early on that two protagonists of opposing genders had previously been in a romance and now there is awkward tension between them. Yet eventually, it’s like the movie completely forgets about that. In fact, I don’t even know why it is present as it has nothing to do with their character arcs or their interactions with others. Almost immediately, the girl in question falls for another guy because…he’s handsome? Her former boyfriend is already in a relationship with someone else, who falls in love with Donnie Yen’s character because…he’s handsome? It’s never f@cking clear and I hate ‘love at first sight romances’ even though Donnie Yen’s character falls in love with SOMEONE ELSE because…she’s pretty? Okay, she’s also a slave from the same country as him, but is that enough to make us care about their feelings towards each-other? The first guy declares that he will kill Donnie Yen for accidentally stealing the affections of his girlfriend, but there isn’t any confrontation, making that whole subplot wasted. The girl who has unrequited feelings for Donnie Yen seems to forget about her subplot as well and the remaining time is spent on her interactions with the children…THEN WHY WAS IT THERE IN THE FIRST PLACE?! Also, one of the children is treated as a pariah by the others, although I never understood why. I presume the ‘why’ was left on the editing room floor. I haven’t even discussed HALF- HAAAAAAAALF- of the subplots which take place throughout the duration of “Seven Swords” and I feel like what I’ve already listed is far too many. Perhaps there was more substance during the four hour cut, but I don’t even want to try watching that if it ever gets released. I don’t want to remember my first experience with this movie, much less potentially go through it again. They cut out too much for any of this to matter, but not enough. They needed to slice out more irrelevant scenes and subplots! Once “Seven Swords” started begging it’s audience for us to care about the relationship between a character and his… horse, I completely detached myself from the movie and waited for the next fight scene to occur…and waited…and waited… 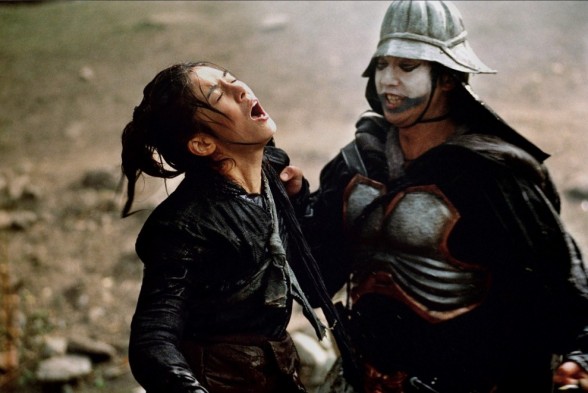 At least Tsui Hark doesn’t rely so much on CGI…Actually, the sets are pretty damn impressive and the cinematographer is sure to capture plenty of gorgeous shots. Like “Seven Swords” or not, it was a pretty lavish production and that shows on-screen. Too bad the fights were pretty subpar considering the talent involved. The director was clearly more interested in using the fights to provide cool looking visuals instead of smooth, fast paced choreography. This isn’t necessarily a bad thing, but the visuals didn’t leave much of an impact on me and Tsui Hark’s experimental moments outright confused me. I will emphasize the ‘me’ there, as many reviewers appreciated the visual style. I always felt that the camera was too close to the combat, cropping out what the fighters were doing. The final fight is the exception because Tsui Hark does keep the camera at a healthy distance and lets the choreography sing. It’s the best scene in the entire movie and I wish all of the previous battles were like that. While there is a fair amount of action, “Seven Swords” is not action packed, instead focusing on the clichéd and boring shit. If you made a connection to the characters or their relationships, then good for you. I didn’t. There is definitely a lot of violence, but at times it looks a little fake. To be fair, DO NOT WATCH THE ENGLISH DUBBED VERSION! While the main voices are okay, for some inexplicable reason the extras did not get voices. So people are getting hit, maimed and worse and you don’t hear a peep out of them. This brought down the tension levels considerably, so if you have to watch this, check out the original language version. I would’ve done that anyway, but my Dad insists on watching the English dub. Ugh…Actually, the dub did provide the corniest/cringe inducing moment where the chick who likes Donnie Yen talks with the chick whom Donnie Yen likes. They start asking each-other if they love Donnie Yen, but can’t seem to understand what the other is saying even though THEY’RE BOTH SPEAKING ENGLISH! Eventually, I realized that there was a language barrier problem. One character is Chinese and the other is Korean, so they likely struggle with understanding eachother, hence the confusion and repetition. I imagine if I watched the Cantonese or Mandarin language version, the Korean woman primarily speaks Korean…but since they blanket everything in English for the dub, it sounds insanely moronic and cheesy. The dub tells us eventually that she can’t speak their language very well, but that’s after they’ve already embarrassed themselves with that exchange. So once again, AVOID THE ENGLISH DUBBED VERSION.

In the end, I view Tsui hark’s “Seven Swords” as a misfire. If I look at it from a kung fu perspective, it only offered one awesome fight sequence, with the rest ranging from okay-to-subpar. Yet even if you enjoy their presentation, since the choreography is intended to be second nature to the visuals and I do understand if you appreciate that (even if I disagree), there isn’t enough action to make up for everything else. Fans likely will appreciate “Seven Swords” as an epic, paying attention to the sets, cinematography, costumes and (admittedly cool) weapon designs. If that becomes your anchor to the film, then good for you, but I see that as nothing but window dressing…like enjoying a movie just because it has state-of-the-art CGI. I think this movie sucks because it was designed to be a four hour feature, which is stupid because Tsui Hark should’ve known that at least 40% of his project would be cut down in post production. The story developments, characters, their relationships, motivations and any reason for the audience to make a connection to them is DOOMED to be lost- or at least diminished- in the process. Yet the director chose to indulge himself more than what was necessary and include bits and pieces of subplots that were mostly removed for the final cut, which all feel pointless and bloat the running time. So on a script level, it feels incomplete. The fact that the weaknesses annoyed or bored me, while the strengths underwhelmed me, meant that I did not enjoy myself.

Violence: Rated R. It’s pretty heavy in this area. Lots of severed limbs and death. Many would condemn it as gratuitous, but I believe all bad movies would benefit from decapitations and impalings.

Nudity: None, but there is sex.

Overall: “Seven Swords” sucks, but the majority of viewers seem to like it more than I do. Keep that in mind when determining whether or not you wish to see this.