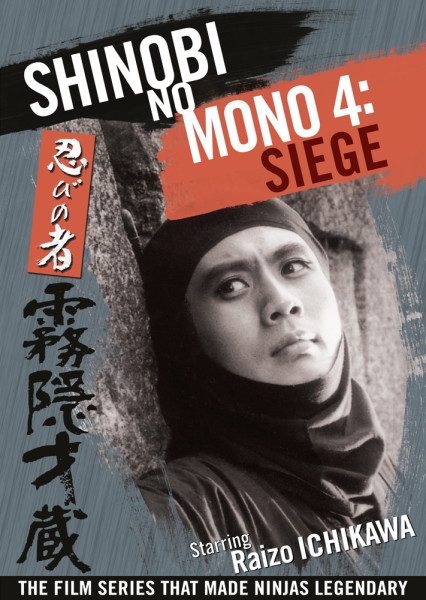 Plot: Saizo Kirigakure (Raizô Ichikawa) is a highly skilled ninja in the employ of the famous Yukimura Sanada (Tomisaburô Wakayama) and his mission is to assassinate the Shogon, Tokugawa (Ganjirô Nakamura). But it shall be a very difficult task, as Tokugawa isn’t only incredibly crafty, but he also has hired dangerous ninja himself. Also known as “The Ninjas 4: Siege“.

I had given up on the “Shinobi no Mono” franchise after “Shinobi no Mono 2” and “Shinobi no Mono 3” both managed to confuse and bore me at once, while still managing to retain an air of respectability thanks to the talented filmmakers involved. Why is the latter a problem? Because I didn’t like them, but couldn’t have any fun or find any solace tearing into them with my critical fangs, since they weren’t bad movies on an objective level. Yet I suffer from ‘Obsessive, Compulsive, franchise disorder’, so even if it meant later instead of sooner, I would eventually put on my black ninja suit, equip myself with my ninja throwing stars and wear my pink headband that says ‘ninja’ on it. Finally, it was time for my duel with “Shinobi no Mono 4: Siege“. Initially, I had the upper hand as this entry relied WAY TOO MUCH on a convoluted history dump and I had difficulty telling who was who. But soon, the movie began its counterattack using intriguing ninja gimmicks, good action sequences, some EPIC imagery and…*gasp*…a sense of fun? It’s still not as good as the first “Shinobi no Mono“, but “Shinobi no Mono 4: Siege” is a step up from the previous sequels because it’s actually entertaining. You’ll be confused if you aren’t familiar with the war between Tokugawa and Yukimura, but I did enjoy myself and that is what matters.

Director Tokuzô Tanaka has always been a competent director, but he steps up his game for “Shinobi no Mono 4: Siege“, delivering some wildly spectacular visuals. A lot of attention was put into framing every shot, which can be poetic, haunting, beautiful, mysterious or just…downright cool! I loved the use of wide shots because the staging was planned to the smallest detail. Characters are placed in positions to where you can see them INDIVIDUALLY amidst all the chaos, regardless of what was going on. The action scenes are pretty exciting, showcasing solid choreography- for a Chambara flick- and having a lot of fun with ninja gimmicks. Whereas its predecessors tried to present the art of ninjutsu as grounded in reality, “Shinobi no Mono 4: Siege” plays into the legends by having ninjutsu practitioners be capable of super human abilities. You might not like this approach, but I had no issue with it since the execution was effective. The finale though is where everything comes together perfectly. The ‘Siege’ itself shows explosions going off incredibly close to the extras, sets being blown apart and…everything seemingly catches on fire. Yet somehow, the camera never loses focus on the characters DURING THE ACTION. They are always placed at the right spot, so you can see everything falling apart around them. If a green screen was used, then that had to be some of the best green screen work I had ever seen. But something tells me the filmmakers got a little reckless…The spectacle is excess DONE RIGHT, but it’s the way it’s all captured on film that really makes it stand out as phenomenal. I squealed like a pig when I recognized the music of Akira Ifufuke, even before his name was displayed on the credits. It’s not because I’m an expert, it’s just that his scores all sound alike. Yet even though his career seems to be based off of one or two themes, there are enough variations that it never becomes stale. It helps that those two themes ARE FREAKING AWESOME. His music matched the visuals perfectly too, so I’d give the score a big, wet, rapey kiss.

UNFORTUNATELY, “Shinobi no Mono 4: Siege” might’ve achieved victory with me, but it was a Pyrrhic win. Whereas my biggest problem with Hong Kong kung fu flicks is how each of them seem to have similar stories, characters and aesthetics, my issue with Japanese Chambara flicks is their obsession with giving history lessons while always presuming we already know said history. The narrator and characters explain everything way too much and yet that never made it any easier to understand, which is funny because I AM FAMILIAR with the story. Certain parts of the narrative are rushed too much, glancing over certain subplots involving who was who and who was working for who. I had difficulty keeping up with the sides and this wasn’t helped by the shoehorned romance. In this case, I felt like the love story must have been established in “Shinobi no Mono 3“, because this pivotal relationship that dominates so much screen-time seems to lack a back-story. The problem with this theory is that even though Raizo Ichikawa is still the protagonist, he’s playing a different role, so…was the character of Saizo in previous films? If so, did he have a romantic subplot? If this is the case, then it would be wise to check out the predecessors to refresh your memory- something I don’t personally want to do- prior to viewing this one. Either way, I seriously don’t remember whether the characters Saizo or Akane were featured in the previous films. Because the movie is in a hurry, the foundation of their relationship is overlooked and Saizo’s character development is sloppy. When Saizo suddenly declares that he has found his humanity in the end, I was like: “Huh? Where did this come from?“. I thought about it some more and then wondered when they established Saizo’s lack of humanity…He flat out says he must reject human needs…a few scenes prior to his reversal on the subject…but his actions don’t really support his initial claims. It’s a flimsy character arc and “Shinobi no Mono 4: Siege” should have took lessons from the original film. “Shinobi no Mono” worked because it was a focused character piece, while the history was part of the background- the setting, if you will. The sequels- including this one- made the historical events the TRUE main character, while the actual main character is treated as an afterthought in comparison.

“Shinobi no Mono 4: Siege” isn’t very good in regards to the script, as the characterizations are light weight, the story is convoluted and the reliance on history undermined what was supposed to be the actual plot. If you aren’t Japanese and aren’t an expert on Japanese History, you might be very confused.. Yet “Shinobi no Mono 4: Siege” is still entertaining because it moves quickly and the action scenes are shockingly good. The director had plenty of inspired ideas how to draw emotion from us using framing, while the cinematographer, editor, music composer and actors did a superb job at realizing his vision. It’s not a great film, but it did reignite my interest in this franchise and I will probably see part 5 once it is released in the U.S. The funny thing is most franchises start to become stale by part 4, but “Shinobi no Mono 4: Siege” is the entry that breathes life back to the series- although to be fair, most viewers are more generous to the previous sequels than I am.

Nudity: None, but there are mentions of sex.