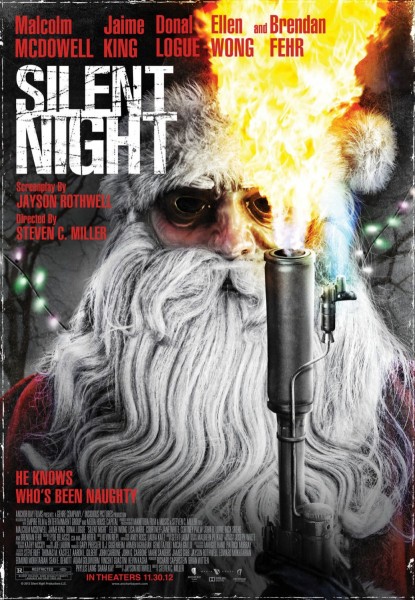 Plot: A serial killer dressed in a Santa suit goes around slaying naughty people on Christmas Eve. It’s up to a traumatized policewoman (Jaime King) and her arrogant superior (Malcolm McDowell) to stop him.

“Silent Night” is a loose remake of the 1984 cult classic, “Silent Night, Deadly Night”. I didn’t have a whole lot of time to fume about the existence of ANOTHER remake of a beloved film, as I wasn’t even aware that this had been made until it was released and the reviews were lukewarm-positive. I suppose I can’t totally blame the producers for wanting to start over, as the franchise that had been born from the original wasn’t held in high regard (even by horror fans). Now that I’ve seen it, I can let out a sigh of relief, because it’s not really a remake. Beyond the basic premise of a Santa serial killer, the two movies have nothing in common, although there are a lot of homages to the series. It’s not really a good movie, primarily it because can’t make up its mind as to whether or not we’re supposed to take it seriously, but slasher fans will find some enjoyment out of it. Obviously, I’m partial to the genre, so I was okay with “Silent Night“.

One of the issues I have with “Silent Night” is its positive and negative attributes must’ve been mixed in a theoretical blender, because I can’t discuss what I liked without bringing up what I disliked. For example, despite being a direct-to-DVD feature, “Silent Night” was well produced. The filmmakers acquired a respectable cast, nice locations that exploit the Christmas motif and properly utilized epic horror set pieces. But while the direction is acceptable, it’s just a bit too polished and clean cut. I like my slashers to be a little more rugged and atmospheric. The gore is thick and sometimes even spectacular, but it occasionally dabbles in CGI, which I would prefer stay out of this genre. At least there’s a healthy amount of nudity, that is given to us by some attractive ladies. No problems there! Oh wait, the characters were superfluous and the sexier scenes feel like pointless divergences. The killer is sort of menacing, but he’s not very memorable because we know so little about him. The original focused ENTIRELY on the killer and what drove him into insanity. Here, his motives are vague because his victims aren’t always shown to be ‘naughty’. Even when they reveal his back-story, it doesn’t account for his apparent omnipresence and invulnerability. I’m all for ambiguous villains- Michael Myers in “Halloween” (NOT THE SEQUELS) being one of the creepiest examples- but “Silent Night” gives away too much information, while not giving enough. I also love how he doesn’t waste any time when disposing of people, but when he’s fighting the protagonist during the finale, he’s using non-fatal attacks. Instead of decapitating her, he tackles her with the base of his axe. I hate it when characters only live or die due to bad writing. 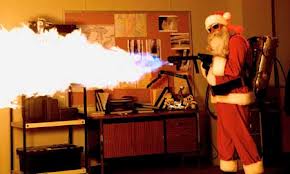 But the main problem with “Silent Night” is its tone, although it’s not an objective criticism because it generally succeeds when it’s being serious or silly. Jaime King is clearly taking her role seriously and puts her heart into it. Her husband passed away under questionable circumstances (it’s only implied, never stated) and it has left her a wreck. She’s vulnerable- maybe even to the point where it makes her sappy- and has enough characterization to where she earned my sympathy. I did not want to see her die. She even has some scenes, primarily involving her Father, that are genuinely moving. Her character foreshadows the films cynical attitude towards Christmas, which becomes problematic as the movie progresses. The only good anti-Christmas speech comes from Jim (Donol Logue), but it only works due to King’s reactions. The many different rants towards the holidays quickly become redundant and its point becomes lost amidst all of the bloody mayhem. “Silent Night” presumably is trying to have some thematic substance, which I find amusing, but it handles it rather poorly. Nice try though? Yet it also flails around due to the following flaw.

“Silent Night” is incredibly campy and the somber moments just don’t fit with the rest of the movie. I have to presume that Jaime King thought this was a dramatic slasher, but Malcolm McDowell presumed it was a parody. Their individual scenes reflect the difference in attitude, which makes the ones that they share feel surreal. But the funny thing is that the goofy parts are pretty hilarious, and I personally adored McDowell’s performance. He has some of the most bizarre one-liners that are quite quotable. Lines like “But unfortunately, you brought a flamethrower to a gunfight” or “Don’t put avocado on the hamburger!” are golden! The scene where he’s talking to a victim on the phone, but doesn’t realize they are being victimized, is side splitting. Granted, some of the humor is taken to an extreme level where it starts becoming obnoxious. Everyone except Aubry (King), her Father (John B. Lowe), the Mayor (Tom Anniko) and Brenda (Ellen Wong) is portrayed in a negative light. They are all sleazy, perverse assholes. The performances tend to reflect their characters, like how the Reverend has to deliver his lines in the seediest way possible. The bratty teenager, the slut, the stoner, the drunken Santa’s and sleazeball photographer play up their stereotypes to unpleasant levels. Obviously we were supposed to root for their deaths, but not all of his victims are shown to be bad people. “Silent Night” also can’t decide if the killer is supposed to be a warped anti-hero or a frightening villain. 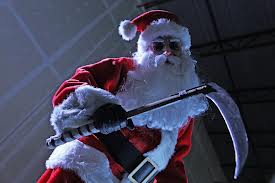 “Silent Night” works as a basic slasher, offering enough cheap thrills to keep me entertained. But the writer and director just couldn’t decide what kind of movie they wanted to make. Is it supposed to be grim or funny? You can argue that the original “Silent Night, Deadly Night” also had a bi-polar tone and you wouldn’t be wrong. Yet it fit better there for one important reason. It was made in the 1980’s, where even the darker movies tended to have a humorous side. Because so many films of the time were so wacky and wild- especially when it came to horror- the actors just knew how to respond to the scenes. Whether their performances were hammy or filled with gravitas, they felt right at home and the comedy was never all that far from the horror. The decade just knew how to pull it off. “Silent Night, Deadly Night” was always cheesy and intense, generally at the same time. “Silent Night” is EITHER cheesy or intense, depending on what the director feels like doing. The original bent the rules of tone, but this remake broke them. Many might disagree with me, but that is how I responded to both films. Still, at least it provided some suspense and laughs, even if they didn’t go well together. Plus, I got enough boobs and splattered heads to satisfy my slasher cravings.

Nudity: Same as the above.

Overall: If you like slashers, I’d say it’s worth a rental, although I wouldn’t expect a modern day classic out of it.