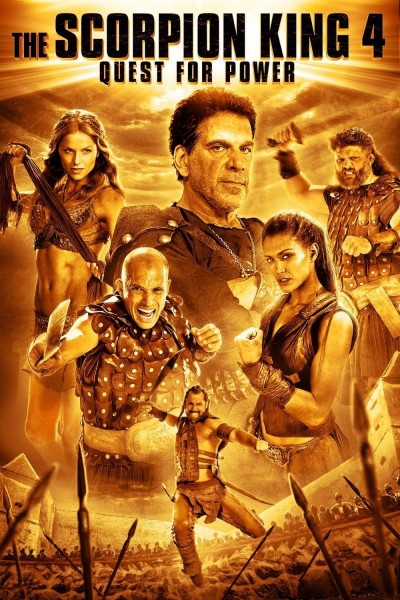 When “The Scorpion King 4” was released on netflix, I had every intention of brushing it aside as I could care less about the franchise. The character was arguably the weakest link in “The Mummy Returns“, primarily thanks to the crappy CGI and a wasted use of Dwayne ‘the Rock’ Johnson. But the character was popular enough to spawn a prequel, titled “The Scorpion King“, which was a mediocre rip-off of “Conan the Barbarian“. Apparently it made enough of a profit to allow filmmakers to cash in on the direct-to-DVD market and a prequel (“The Scorpion King 2“) was made for the prequel to the sequel of a remake of “The Mummy’s Hand“. It pushed the boundaries of mediocrity, although I suppose it was acceptable as direct-to-DVD fare. Yet I chose to sever my relationship with the franchise afterwards, as “The Scorpion King 3” seemed terrible enough, but not in a way that I was willing to make a decision I’d certainly regret- probably because I was too busy watching “In the Name of the King 2“. I highly doubted “The Scorpion King 3” would provide something as amazing as a stoned Dolph Lundgren looking like he had just wandered onto the wrong set. Now that is how you make a piece of shit, but all “The Scorpion King 3” seemed to offer was Ron Perlman and Randy Couture looking embarrassed, a novelty that has long since worn off- so I chose to avoid it. Unfortunately, my Dad saw previews for “The Scorpion King 4“, which boasted an impressive MMA cast and since Daddy is a mark, he demanded that it enter his blu-ray player. I ultimately decided: “Eh, what’s the worst that can happen?“

It turns out “The Scorpion King 4” can happen…

This was a monumental headache, although before I get into my verbal raping, I will concede that the production values weren’t bad…considering we’re dealing with a low budgeted direct-to-DVD release. The sets, costumes and special effects aren’t convincing, but at least there were a lot of sets, costumes and special effects- in contrast to lets say…”In the Name of the King 3“– which only had boredom. “The Scorpion King 4″ isn’t a visually appealing movie, but I was expecting something much cheaper looking. Unfortunately, it’s also a disaster on a technical level. I find it difficult gauging the direction because while my immediate instinct is to say ‘awful’, most of the blame lies within the choreography and editing. You’d think that with so much martial arts talent involved, they’d be able to produce a reasonably engaging fight scene. Instead, every attack looks slow and it never seems like the punches and strikes are actually connecting. The sound effects are too over-the-top, which adds to the phoniness. Maybe there wasn’t a lot of room for re-takes, but the edits weren’t meshing well together. An attack would be captured with one camera angle and then it would cut to another shot as the attack finishes, but their posture or position would be significantly different. The continuity errors were the real stars of this feature! Everything just feels so phony and staged, with the only decent action sequence being the chick fight between Ellen Hollman and WWE’s Eve Torres. Those reversals and takedowns were easily the best part of the movie and every wrestling fan out there reading this should shiver…Eve Torres produces the best fight scene in the movie…terrifying. 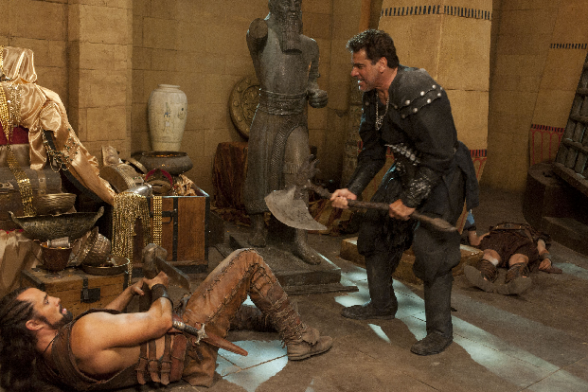 But the real issue with “The Scorpion King 4” is the tone. This is a very “humorous” movie, or at least comedy seems to be what it’s going for. The mugging, banter and sight gags are fast, furious and insanely over-the-top. but at no point did they ever become funny. When the Scorpion King and Drazen (Will Kemp) are participating in homoerotic text (too blunt to be subtext), they say things like “Don’t get any funny ideas” and “That better be a dagger poking me“. We’ve heard these kinds of lines too many times before, so I always groaned whenever the script tries to be cute. But as bad as that was, nothing struck more terror in me than the “romantic” chemistry between the titular protagonist and Valina (Ellen Hollman). Their verbal sparring was so forced that I actually had to stop the movie and take a break. Her hostility towards him only served to make her unlikable and why should I care about the couple when their exchanges go like this:

“This is the worst day of my life.”

“No, the worst day would’ve been when you were imprisoned.“

“No it wasn’t, because you weren’t there.“

They’ve had about 5 minutes of screen-time together and this is how they’re acting, even though the reasons for this hostility were weak. I often felt the comedy was so broad that the target audience might be children, as maybe they would laugh at the silliness. Only kids like seeing peoples eyes bug out when they’ve just been hit in the nuts while prat fall musical cues play, right? But I can’t recommend this to children because there is too much sex and violence. The temple sequence was oddly sleazy and people get killed rather viciously. So it’s too ‘adult’ for children and too ‘childish’ for adults. Too many nut shots, too many weapons being shoved in peoples groins/asses and they’re all played for the laughs. Victor Webster (Mathayus) is not a very good actor, but I will say he did a decent imitation of a comical Dwayne Johnson. I can see him getting better, but the material really fights with him. Any credibility the Scorpion King may have had as an action hero is killed off when he is forced to dress like a woman. Ellen Hollman (Valina) does better, but her tough chick persona was more obnoxious than endearing. The cast in itself is rather bizarre, as you have many veterans like Rutger Hauer, Barry Bostwick, Michael Biehn and M. Emmet Walsh showing up for cameos and they all look rather unhappy to be there. Bostwick might be having fun, but his performance is just as irritating as the rest of the movie. Then you have cult stars like Lou Ferrigno and Don the Dragon Wilson showing up for wasted cameos, with Wilson barely registering before he’s killed off. The MMA cast can’t act and their martial arts skills are wasted, but big names like Royce Gracie and Roy Nelson make appearances. The acting is bad, but I suspect that everyone is merely trying too hard to be funny.

Maybe “The Scorpion King 4” just wanted to be really campy, but I found myself often bored and annoyed. It’s superior to the “In the Name of the King” sequels, but it’s also more aggravating. Much like how the ‘humorous quips’ (“anybody home?“) tend to be stolen from from other works of fiction, the plot blatantly rips off other plots. The finale is pretty much a re-tooled, shitty version of “Indiana Jones and the Last Crusade“. But every segment within this quasi-episodic narrative is bound to remind you of something better, which is never a good thing. I suppose I will end this review by drawing attention to the poster. It implies that Lou Ferrigno is the main villain and that the professional wrestler and MMA competitors have substantial roles, but Ferrigno has about 5 minutes of screen-time (at the most) and the MMA guys have cameos, while the wrestler has a single fight scene. Don’t fall for the misleading marketing campaign, as outside of Victor Webster, Ellen Hollman and Will Kemp, everyone else is lucky to appear for a whole scene.  “The Scorpion King 4” is just a bad movie that tries to hide its badness with wacky hijinks, which only makes it worse.

Overall: “The Scorpion King 4” gave me a raging headache and was incompetently made, so it sucks with aggression.