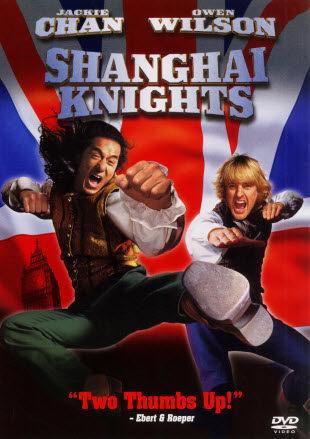 My previous Jackie Chan experience was with “The Accidental Spy”, which while not completely devoid of merit, sort of bored me. Even though it’s only been a week since I watched it, the film is already fading away from my memory. The only image that has been left with me is Jackie’s ass, as he ran away from those gay, Turkish gangsters who kept trying to see his one-eyed monster (wang was just too obvious). Why bring this up? Because “Shanghai Knights” is the complete opposite. I wouldn’t call it an exceptional film. The jokes often misfire, the anachronisms are glaring, the characterizations are thin, the story is predictable and it’s just…kind of dumb. Yet honestly, none of that really bothered me while I was watching it. “The Accidental Spy” might’ve not had as many ‘flaws’ as, but “Shanghai Knights” is far more entertaining, which is what I want out of a Jackie Chan movie.

I remember during High School, my friends and I would debate as to which was the better franchise: “Rush Hour” or “Shanghai Noon”. At this point, we thought “Rush Hour 3” (my first review) and “Shanghai Dawn” were projects that would appear in the immediate future, but it would be plenty of years before we saw a trilogy form out of “Rush Hour” and we’re still waiting for “Shanghai Dawn”. I was in the “Rush Hour” camp, but I thought all of these films were pretty good. As an adult, I think I’ve figured out why people tend to prefer one over the other. If you like Chris Tucker, you’ll find the “Rush Hour” films hilarious. If you don’t, you’re not going to like them at all. Call it a love it-hate it scenario, if you will. “Shanghai Noon” and “Shanghai Knights” usually don’t generate as much excitement from casual audiences, but the overall reception seems to be warmer. Less people love them, but more people enjoy them. I suspect this has more to do with the focus. “Rush Hour”- and especially “Rush Hour 2”- relied more on Chris Tucker than it did Jackie Chan. The “Shanghai” movies are more balanced, relying on both stars equally. This might be because the “Rush Hour” films have higher ambitions as comedies- aiming to be hilarious- while “Shanghai Noon/Knights” is an action/adventure that happens to be amusing. I don’t think Owen Wilson is funny enough to carry a film on his own (I don’t like the majority of his work), but in the right doses, he can be charming. As for Jackie, he gets to have plenty of wacky facial expressions when he fights people, which is what he does best. 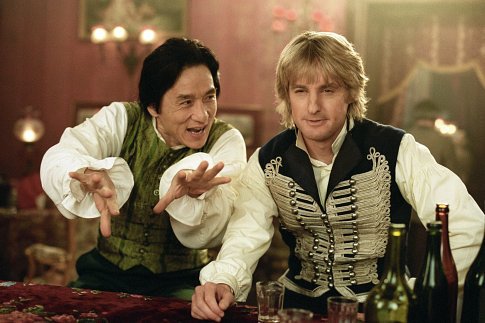 The comedy present in “Shanghai Knights” does often come across as desperate. Owen Wilson tends to be the biggest perpetrator, although I haven’t decided why. Maybe he was ad-libbing a lot? Sometimes his lines, or his body language would just be too cheesy to be funny. I especially don’t like it when his character is trying to act so badass, using fake kung fu stances and making strange noises. But this is balanced by some legitimately amusing lines and funny reactions, although keep in mind, humor is subjective so you might like what I disliked and vice versa. The writers have a lot of fun with anachronisms. Usually they are kind of forced, but I will admit that the Jack the Ripper cameo made me laugh. I did think the music was a bit too slap-stick(y) during some of the fights, especially when Jackie takes on a handful of cops early on. I can’t stand Benny Hill-esque shenanigans, so those moments brought groans out of me. The director and Jackie apparently had decided to make nearly every fight as silly as possible, even having a sequence where Jackie re-enacts “Dancing in the Rain”, except with kung fu. Generally it worked, but even some of the fights felt like they were trying too hard to make us laugh.

But make no mistake, “Shanghai Knights” coerced a few chucks out of me and always managed to make me smile. Even when the gags were being more dumb than funny, they were good natured enough that I’d just shrug and move on. The above paragraph is just me being a critic. Jackie’s age definitely effected the fight scenes, which are slower and more telegraphed than usual, but the spirit of them remains the same. They use the settings, props and physical comedy to spice up the choreography and it works. I found the fights to be enjoyable in spite of the fact he isn’t moving as fast as he did in “Drunken Master II”- not that I’d expect him to be THAT quick. The much anticipated showdown between Jackie Chan and Donnie Yen was a bit of a letdown, but I guess it was acceptable as it’s not the final fight. Had it been more epic, then Jackie’s duel with Lord Rathbone (Aiden Gillen) would’ve been anti-climactic. That was cool because it was edgier than the previous battles and Jackie uses a distinctly Eastern style of swordsmanship, whereas Rathbone uses a more European style. I love it when two different kinds of fighting styles clash and “Shanghai Knights” milked that for all it was worth. But there are a lot of fights and they’re spaced throughout the feature evenly. 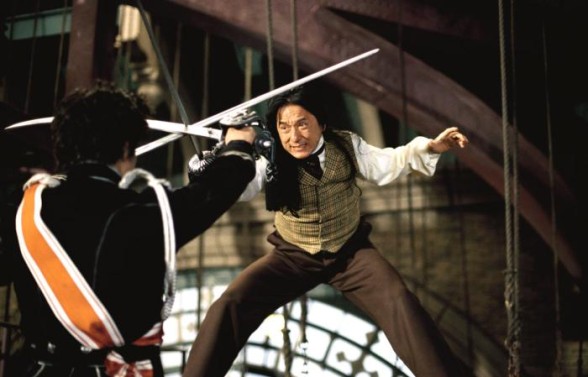 In the end, “Shanghai Knights” was even breezier than its predecessor when it came to the pacing. The action is plentiful and the comedy fit in nicely. Sure, occasionally it will try to shove its silliness down your throat, but everything about it is so lighthearted that the bad parts likely will dissipate from my memory. I’d still say “Shanghai Noon” was superior, primarily because it had more fun with the East meets West theme. It also lacked a lot of the little flaws that would constantly appear during “Shanghai Knights”, but I’d say they’re in the same league. “Shanghai Knights” buried its flaws under a heavy mudslide of sheer entertainment, so I allowed myself to be swept away, enjoying the movie even when it was screwing up.

Note: I didn’t realize that the kid was Aaron Taylor-Johnson, who would grow up to be the lead in “Kick-Ass“.

Nudity: Some sexuality, but nothing too extreme.

Overall: I’d recommend that everyone see “Shanghai Noon”, as you don’t have to be a Jackie Chan/Kung Fu fanboy to enjoy it. If you have fun, then definitely watch this sequel, which is a worthy followup.