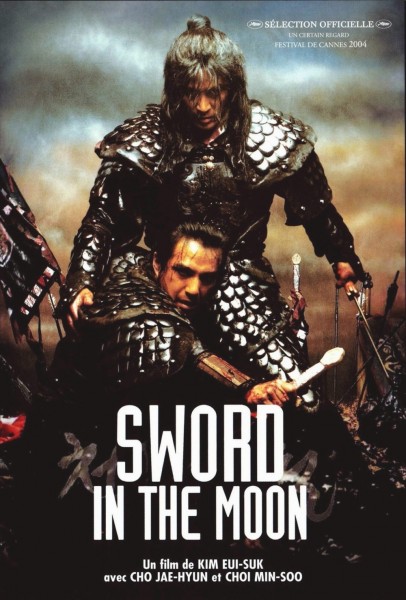 Plot: Set during the Joseon Dynasty of Korea, an assassin is murdering Government Officials. A cold blooded General (Cho Jae-hyun) is ordered to catch the culprit, whom he learns is an old comrade (Min-Su Choi). Also known as “Cheongpung myeongwol“.

There is nothing so aggravating like a bad movie that tricks you into thinking that you’re about to watch a good movie. “Sword in the Moon” won me over with an admittedly strong first act, drowning me in a gloomy atmosphere that complimented its intriguing premise. A warrior must investigate the mysterious murders of Government Officials? Cool! The possibility that the assassin might be of a supernatural origin? Even cooler! The first 20 minutes feel like they belong in a horror flick, showing off a terse score, nauseating gore, a slow burn style of suspense and I love how the actors share a perpetual state of unease, as if they know that doom is sneaking up on them. Very effective. Not everything was perfect, as the editor failed to establish whether any passage of time had taken place, confusing me as to when everything was happening. The lighting was so murky during the night scenes that it was often difficult to tell who was who and what was going on. This is especially agonizing during the fights, which…at least sounded exciting, but I wish I could’ve seen them. However, the director does manage to create some creepy imagery by obscuring our view, especially when we first see the assassins stalk their prey. The director makes sure to draw us in, keeping our eyes glued to the screen, daring us to spot the threat. When I finally did, I actually had to do a double take, but realized with glee that I was practically shivering. What an awesome, frightening moment…I wish “Sword in the Moon” had more of those…

The film manages to retain its eeriness even when our protagonist (Cho Jae-hyun) discovers the identity of the assailant, which robs the film of any mystery. I was still willing to invest myself because I liked the nightmarish atmosphere and at the absolute least, a conspiracy of some sort was being set up. But then the flashbacks started and…let’s just say that the assassin’s next victim was my entertainment. Once the narrative takes us to the past, all traces of being ‘horror’ dissipate by the sudden arrival of bright lighting. Before I rampage though, let me point out that “Sword of the Moon” does benefit from flashy sets and costumes, obviously having a decent sized budget at its disposal. Furthermore, the director was obviously trying his hardest to create a unique, artfully made masterpiece and while I believe he failed, I always admire effort. Admittedly, I found the experimental camerawork to be more distracting than effective. But I can understand why some viewers would appreciate these strange visuals. The post production effects weren’t prevalent, but were very unnecessary when they appeared. There are moments when the cinematography shines through and the fight scenes- when you get to see them- are pretty good. I liked the posturing and the violence. But make no mistake, these are slivers of copper mixed in a big pile of shit. I can’t remember the last time I was so utterly bored while watching something belonging within a genre that I usually like. This isn’t a long movie, only having a running-time of 90 minutes, and I still was struggling to stay awake. 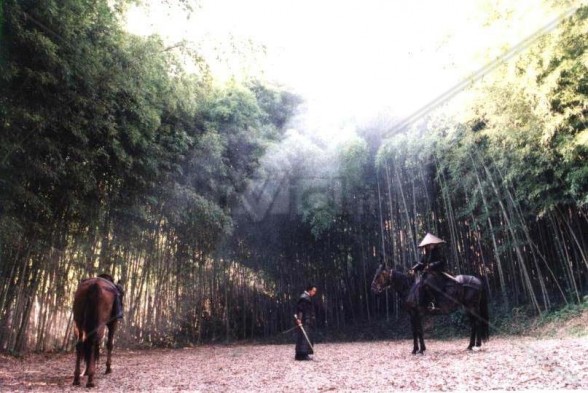 Pacing is tricky to describe, but must slower paced films gradually build up, moving faster and faster until it reaches a satisfying resolution. “Sword in the Moon” was building up momentum until the flashbacks began, which caused the narrative to flatline until the end credits finally put me out of my misery. Everything moves at a snails pace and even when something exciting happens, it ends so abruptly that I was never brought out of my battle with slumber. Part of the reason I lost interest is because I struggled keeping up with what I thought was a complex story. Now that I look back on it, I think “Sword in the Moon” had a simple story that was told in an incomprehensible way. The narrative is filled with way too many distractions, from the bantering guards to the hired convicts to the implied love interest for another character to the overly long flashback that spends its time fleshing out our heroes…except by the time it ends, you’ve barely learned anything about them that hadn’t already been explained through exposition. Kim Bo-kyung is hot, but I couldn’t tell you anything about her character outside of her desire for vengeance. Nor could I tell you anything about her relationship with the assassin (Min-su Choi), besides it being…vague. Honestly, I thought there was more sexual tension between the two male leads. They’re constantly shooting knowing smiles at each-other, laughing while frolicking around together and saying things like: “I could only do it because you were at my side“. I’m pretty sure that the female lead was only added as an afterthought when the director realized how homoerotic their interactions were. Now I giggle whenever I think of the title: “Sword in the Moon“. Hehe.

But how are we expected to make a connection to the characters when all they do is put on their mopiest faces and stare into the camera intensely? When they finally open their mouths, they spew out such ridiculously flowery dialogue that somehow ends up being generic because we’ve already heard these speeches before. Do the monologues or various arthouse lines reveal any insights into these characters? Outside of them presumably being pretentious wannabe poets, no. I’m sorry, but “It turns out I don’t want to die” means little when we’ve never been lead to believe that the speaker was a death seeker. The problem with “Sword in the Moon” is that it wants to be considered cinematic art, but while it certainly can be artsy, it overlooks the most important part of creating a good movie: Giving us a reason to care. There’s nothing engaging about excessive close-ups, continuously murky visuals and characters who are just as monotonous as the rest of the movie. Of course, the flaws are even more grating because the first act was pretty intriguing and unsettling. If the opening 20-25 minutes were inferior, I doubt I’d be so angry with “Sword in the Moon“. It’s bad for unconventional reasons, as there’s nothing worse than capturing my attention only to bore me once you have it. Oh yeah, the ending sucked too.

Nudity: I don’t think there is anything explicit, but there are a few close calls.

Overall: “Sword in the Moon” is a poser art film that’s masquerading as a martial arts/horror epic, dressed in surprisingly lavish production values. I thought it was boring.