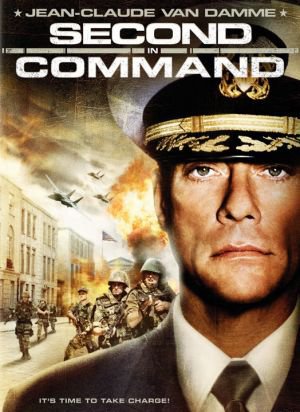 Plot: Commander Samuel Keenan (Jean-Claude Van Damme) is transferred to an American embassy in a small European Country and it is his job to protect it. But as soon as he gets there, a coup forces the embassy to take in and protect the native President. Now they are surrounded by bloodthirsty rebels, who will do whatever it takes to kill the ousted leader.

Even though I’ve made it my business to view all of the works of Jean-Claude Van Damme, “Second in Command” has always alluded me until now. The main reason I avoided this was that I heard it was pretty bad compared to the majority of Van Damme’s contemporary works, so why bother with that when I could watch the more well received “The Shepherd”? Van Damme might’ve been at his most famous during the 90’s, but since he had been relegated to the realm of direct-to-DVD, the quality of his works skyrocketed and I don’t really want to break that pedestal. If I wanted to view a bad direct-to-DVD actioner starring a former, major action star, I would watch whatever Steven Seagal produces…which I do. Yet much to my surprise, “Second in Command” turned out to be a thoroughly entertaining action flick. It’s certainly not one of Jean-Claude Van Damme’s stronger efforts, but its breezy pace and seemingly unlimited amount of explosions warmed my heart.

What I like about “Second in Command” is stuff always seems to be happening. It pretty much starts off with an action scene and while it occasionally will take a breather to explain something, the mayhem never really stops. Immediately there is a mass protest, someone gets killed, people revolt and force the country’s President to flee. Van Damme and his comrades have to assist him, but nothing is ever easy, so there’s a big car chase and shootout. Once he reaches the embassy, the siege immediately begins. From then on, the characters have to figure out what they can do- try to evacuate or hold the fort? There are a lot of confrontations, but it really becomes exciting when the villains take some hostages. Now they have to perform a rescue operation, even though they lack the resources. They’re more skilled than the enemies, but they don’t have as much manpower and their ammunition is very limited. Watching both sides strategically attempt to overcome the other side was very interesting. This is good pacing at its finest. There’s never a dull moment! 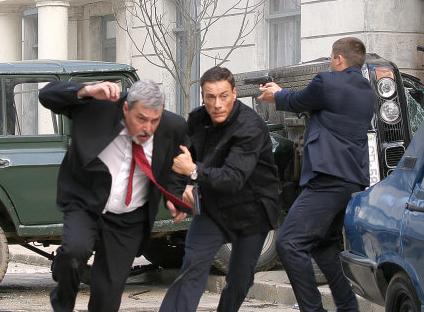 Now I will admit that the action itself is fairly standard. “Second in Command” doesn’t use a lot of CGI, so expect plenty of old fashioned explosions, which are pretty awesome. But when CGI does come into play (the helicopters), it can be noticeably bad. Furthermore, the camera is often rather shaky and the action can be too tightly edited at times- the usual direct-to-DVD flaws. But there’s enough intensity driving the conflicts that I could overlook the competent- but uninspired- action set pieces. There’s a lot more gunfire and explosions than martial arts, but that was probably for the best as the hand-to-hand fight scenes kind of sucked. It didn’t look like a lot of time or effort was put into the choreography and the director seemed unsure how the fights should be filmed. The camera was too close, always moving around and the movements looked too staged. Luckily, the remainder of the action was much better. The production values are shockingly impressive considering its budget. At times, I thought the spectacle on display was even worthy of a THEATRICAL RELEASE. It’s a shame that shit like “Getaway“, which has a bigger budget but looks significantly cheaper, gets put out in theaters when movies which deserve it get dumped direct-to-DVD.

Now don’t get me wrong, I can’t say “Second in Command” is a good movie. While Van Damme and the primary performers are fine, the minor cast members are pretty bad. To be fair though, it often sounded like they were being dubbed over, so maybe it wasn’t their fault. The love story is predictably useless, even though at least it never lingered for too long. It’s one of those love stories where it forgot the actual ‘story’. We don’t know why they like each-other and during an argument later on, I seriously felt like I was missing something. I also didn’t like Agent Gaines (William Tapley), the bureaucrat of the good guys. He seemed so unnecessarily hostile towards Keenan, with some of his verbal attacks making little-to-no sense. He claims that Keenan just wasn’t ‘up for the job’? The only reason Keenan was forced to step down was because of a technicality. Keenan had yet to do anything wrong. He claims Keenan has an ego, but where did that come from? At what point does Keenan showcase an ego? The girlfriend also seems to indicate this, so not only did they forget the story part of the love story, they also failed to include the story part of the ‘backstory’. I suspect that the writers were just being kind of lazy, wanting the cliched conflict between the soldier and the bureaucrat, but didn’t even think about ‘why’ there would be conflict in the first place. It took THREE different writers to pen such a generic script? Wow. I did like how Gaines did seem to be competent- even if he makes some fatal mistakes- and he even manages to be useful at times. I just felt these characters were so thinly written that it’s hard to tell where they were coming from. The villain isn’t much better. He’s kind of imposing and maybe a little mysterious, but his motives are vague and his actions are predictable. 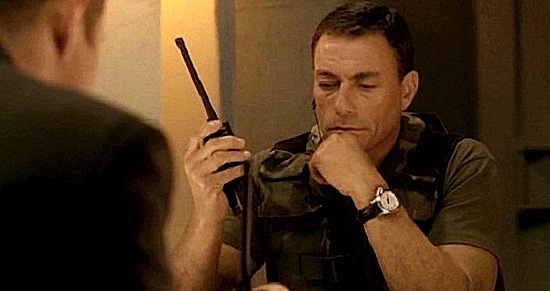 “Second In Command” is definitely an action film devoid of substance. Hell, despite being ripe with dramatic possibilities, it doesn’t even have a lot of drama. When a characters decision gets innocents killed, their reaction is barely glanced over. They keep hinting at an interesting back-story for its protagonist, but it’s never explored and Van Damme is pretty much playing a boring invincible hero. The writers force cliches down our throats even when the cliches don’t make a lot of sense. “Second in Command” has no substance, nor does it ever try to be daring in any kind of way. It’s a fairly standard, uninspired action flick. But within its safe boundaries, it still manages to deliver what I want out of a Van Damme actioner: Lots of Van Damme and lots of action. Its greatest strength is its pacing and even when it was being dumb or silly, it never becomes any less entertaining for it. I think its target audience should be able to have some fun watching it. It’s successes appeal to me more than its failures. My low expectations didn’t hurt either.

Violence: Rated R. It’s not too graphic, but it has its moments.

Overall: “Second in Command” was an enjoyable, but ultimately forgettable actioner starring Jean-Claude Van Damme. Give it a look if you’re the target audience.