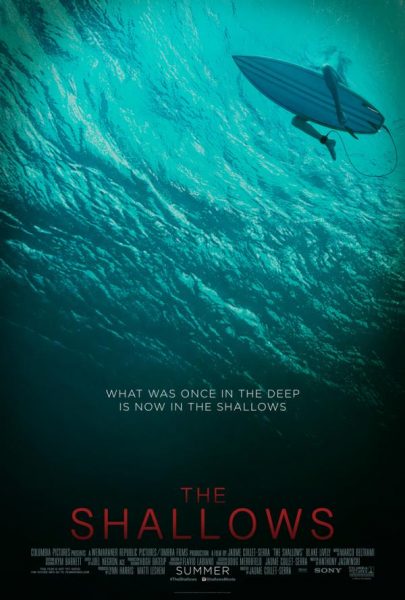 Plot: Nancy (Blake Lively) visits an isolated Beach that holds great meaning for her, only to find herself stranded on a reef and hunted by a great white shark.

“The Shallows” seems to be an attempt to forge a marriage between critic friendly drama (“Open Water“?) and plebeian friendly entertainment (“Shark Night“?), although the relationship ends up being somewhat turbulent, if passionate. This is one of those flicks that boasts a certain amount of intelligence, but is nowhere near as smart as it thinks it is, so you struggle with taking it seriously. But on the other hand, it’s amicable and witty enough that you enjoy its company anyway. I wasn’t entirely sure what to expect of “The Shallows” when I entered the theater, as the first trailer suggested that I would be experiencing a slow burn survival drama, while the second trailer was telling me that it was a high octane shark thriller. I would say the first was a more accurate representation of the movie, although it isn’t like the second was being deceptive. The narrative is paced using a slow burn build-up, as our heroine (Blake Lively) finds herself stranded and is forced to use her medical expertise to survive. The majority of the feature relies on her acting capabilities and she is able to hold the story on her back, even if the script doesn’t want to take any major risks with her. She is never forced to compromise herself, although this arguably is an admirable defiance of our expectations. She never reaches rock bottom, always having the will to fight even when she’s probably aware that she likely won’t survive and she’s always looking out for everyone else in peril. Hell, she never even loses her sexiness! They do attempt a character arc, where she has given up med school because her Mom died from cancer and she’s lost her faith in medicine…which is a weak motivation, as a ‘bright’ student would understand that medicine an evolving practice that has come along way since the dawn of humanity and will continue to go along way as long as people don’t give up every time they lose someone to cancer. She must be one of those people who thinks that the entire world revolves around her, which might’ve been the point considering her exchanges with the locals and how self fellating they were. But the writer never scratches beneath the surface of this possibility, so this attempt at character development never resonated with me. Yet I still found myself rooting for her anyway, because Lively gets to show off her charisma and her character is very pleasant. Plus, I can’t bring myself to hate anyone who would name a similarly stranded seagull…Steven Seagull…Lively did an excellent job at conveying fear, which allowed me to experience what she was feeling, which fueled the tension.

But even though “The Shallows” is patiently moving towards the climax, focusing on the helplessness of the situation, it never meanders or tries to be too artsy. I would even argue that the pacing was surprisingly brisk, which you can argue would diminish the suspense or atmosphere, but you can also argue that it improves the entertainment value. Something always seemed to be happening, with either our heroine concocting various plans to escape or get help or the shark derailing those plans or eating the help. The director never lingers on the shots for too long either, which depending on the viewer, either sacrifices mood or quickens the pace. The scenery is breathtaking and the cinematographer uses techniques to capture as much color and beauty as possible. The underwater photography is arguably even more eye popping! Yet even as we’re appreciating the gorgeous locale, the director will use slow motion, ominous scare chords and ambiguous POV shots to generate unease. Jaume Collet-Serra wants us to envy Nancy for being able to enjoy such a gorgeous beach, so the visual style and tone reflects how great it is. Yet when the shark attacks, this exact same location suddenly becomes a highly dangerous death trap and now the camera is focusing on razor sharp rocks on the ocean floor, the imposing waves and the wide shots convert peacefulness into loneliness. While we’re on the topic of the director, I also found myself liking a lot of the jump scares. The shark will sometimes just appear out of nowhere and while many will find this cheap, they often do tie into the story and I jolted quite a bit. Yet while there is some stunning imagery that might even be memorable, nothing about “The Shallows” stood out as exceptionally terrifying or suspenseful. It’s pretty good in this department, but not great. 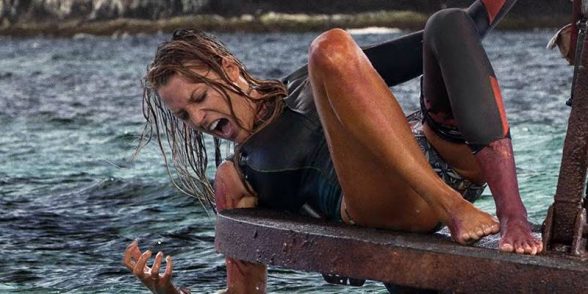 The biggest problem with “The Shallows” though is that its inability to commit to a specific audience sometimes creates friction. There is a segment during the middle block of the movie where the focus shifts to the shark attacking various people who wander into its territory. These scenes lacked impact for me because we knew how disposable they were, so there are no emotional stakes and the PG-13 rating means that the violence will be minimal. At least the camera stays on Lively, capturing her reactions to the grisly mayhem instead of using shaky camerawork and tight editing to cover up the gore. This shows there was some artistic consideration, but the kills are merely transparent attempts to increase the films’ mass appeal. This is also why Nancy keeps getting into the water, so she can now be in peril, even if it doesn’t make a lot of sense. Nancy receives a very nasty bite wound that eventually becomes infected with gangrene, yet she seems to have no problems swimming and participating in action scenes…because that’s going to draw a larger audience. But this premise wasn’t designed for mass appeal, as its too intimate and small in scale. Most of the screen-time is going to surround a character stranded on some rocks, fighting dehydration, starvation and the elements, with the physical threat (shark) only being part of the experience. That’s not very exciting, so the filmmakers actionize the concept and its identity becomes confused in the process- as the premise was not meant to be actionized. This is especially apparent during the action packed finale, which admittedly provided some great white knuckled (I swear the pun wasn’t intended) entertainment. I thought it was intense, but it’s also kind of dumb and Hollywood-ish. The shark is entirely comprised of CGI and I thought it looked very convincing, but the scenes surrounding it are anything but convincing. For one, the beast is far too huge and aggressive for this kind of story. I don’t see how ANYONE could survive a bite from this thing, as one chomp from this pair of jaws should be enough to rip off our heroines leg…Throughout the remainder of the movie, it’s immediately going for kill shots on disposable targets and is even breaking the water to snag people, because that is going to put more butts in seats than any realistic portrayal of a shark. People don’t want normal sized sharks that display normal behavior, they want the massive ones that are ultra persistent…even if that ‘characterization’ means that the protagonist should’ve been killed immediately. The finale reflects this, as it’s very…unrealistic. The plan to kill the shark requires abnormal reflexes and even more luck, with it being so choreographed and over-the-top that it doesn’t mesh well with the previously established tone…but explosions and flying sharks are going to attract more viewers, so…who cares if it’s out of place? And maybe that question isn’t ironic, because I still did enjoy “The Shallows“. I think it’s best attribute is how creative the writing can be. How many times have you seen a person climb onto the corpse of a whale in order to escape from a shark? How many times do you see a person close up wounds using conventional jewelry? The film was constantly offering fresh ideas to this old formula and that kept me consistently intrigued. As clumsy as the script could be, I do believe the inspiration behind it was genuine and you can tell the filmmakers were really trying to make something special. I think they at least partially succeeded, if not mostly.

In the end, “The Shallows” was designed to attract high brow critics and general viewers alike, which is usually a recipe for alienating everyone, as it can easily be too much for one side to be enjoyed by the other and vice versa. But in this case, it got enough right to get on the good side of both teams, even if the reception is more respectful than enthusiastic. It found a solid middle ground that I didn’t even think existed for this kind of story. As for me, I had fun, even if there are too many flaws for me accept it as any kind of masterpiece. I find myself wondering if the producer saw “The Revenant” and loved the ‘Leo Vs Bear’ scene so much that he wanted to make an entire movie based around it. “The Shallows” plays it a lot safer, but it’s also easier to swallow for most people. Enjoying a movie like this though comes down to your tastes, as it’s smarter than most popcorn flicks, but more exciting than most examples of high brow cinema…while possibly not being as exciting as most popcorn flicks, or as smart as most examples of high brow cinema…I’d say this is a 2.5/4 star flick, but I’m going to be generous because I’m partial to sharks and “The Shallows” stands out more because you don’t get to experience these kinds of horror flicks anymore.

Violence: PG-13, but there is some nastiness to it.

Nudity: Blake Lively shows off her body…in a swimsuit!