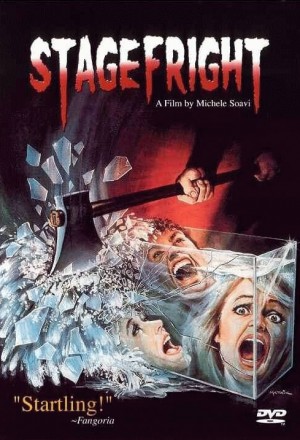 Plot: A group of desperate stage actors decide to hold a rehearsal for their morbid play, despite the fact that a murderous madman has escaped from a nearby Insane asylum. Naturally, murderer+stage actors= murderer kills stage actors.

“Stage Fright” was the big, directorial debut of Michele Soavi, a director who briefly took the Italian horror market by storm with his revolutionary and skillfully crafted gore films. Unfortunately, I have to say that while awkwardly touching the tips of my pointer fingers together in shame, because I am mostly unfamiliar with his work. Soavi followed “Stage Fright” with “Demons 3: The Church“, “The Sect” and most famously: “Cemetery Man“. The last earned him a lot of attention, despite the Italian movie industry previously taking a nosedive in profits and quality. His son became ill and he was forced to leave the movie making business in order to take care of him, making us wonder if he could’ve saved Italian horror from the bowels of obscurity. He has recently returned, but whether he will pick up where he left off, we have no idea. My only previous experience with the man was “The Church“, which was just okay. It had flashes of brilliance, but its encumbered story kept it from being brilliant as a whole. “Stage Fright” isn’t the high art (of splatter) that I presume “Cemetery Man” is (among horror buffs), but it’s…crazy. I can’t bring myself to call it ‘good’, but ‘crazy’? That sums up my feelings pretty well.

Just…try to picture this opening. A hooker walks around, but pauses in front of a dark alley. Suddenly, hands spring forward and begin to throttle her. Her scream echoes throughout the area and suddenly, passerby’s with weird makeup and mannerisms are investigating. They reach into the darkness and start….rubbing the apparent victim? Suddenly the killer- wearing an owl mask- FLIPS over the crowd and everyone starts dancing. Before you can say “what in the hell am I watching?“, the camera pans back and we learn that this is a stage play. It’s a bizarre opening, the perfect fit for a bizarre movie. Everything about “Stage Fright” is weird. The dialogue is weird. The acting is weird. The music is weird. Various scenes, which can be completely superfluous (fish tank?), are weird. Even the kills are strange because of the flippant tone. Are we supposed to be rooting for the killer? Or are we supposed to care for his victims? There are enough twists and scenarios for the characters that it becomes hard to pray for their deaths. But every time we start cheering for them, they suddenly turn on us and our sympathy dissipates. This kind of works though, as it makes their actions unpredictable. A likable character might have a ruthless streak about them and a jackass can become heroic. In some cases, they subvert the apparent development. While I could never decide whether they were worth my pity, at least this kept them interesting. The acting is hard to pin down due to the dubbing, but I thought everyone had ‘something’ to bring to the table. 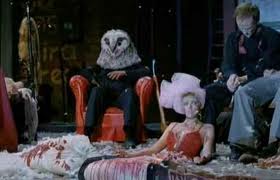 This strangeness does  benefit the absurd writing style. I’d generally point out how illogical the whole premise is. Two girls go to a mental institution for medical help, which they somehow receive. But in the process, the killer murders an orderly and sneaks out without being seen. This is all really stupid, but it’s not out of place in “Stage Fright“. Yet that example is tame compared to the ending, which did test my patience. The finale is awesome, but the ending is full of holes that masquerade themselves as ‘satirical jabs at the slasher genre’. It’s more bad than clever, but it’s not disastrous in the context of “Stage Fright“. Just consider the movie a weird, fairy tale-slasher that takes place in an alternate universe and it shouldn’t be too difficult to accept the film for what it is. Sometimes the craziness assists in the fear department as well. When the killer is staging all those dead bodies and turns on the fan, blowing feathers everywhere, I was a little creeped out. It reminded me of Michael Myers in the original “Halloween” (before he had a real motive). When done correctly, abstractness can be rather freaky. So even though “Stage Fright” is flawed, the flaws ceased bothering me once I got used to them.

Even though it’s technically a slasher, Soavi films it like a giallo. Slashers tend to emphasize violence and nudity, the latter being almost completely absent from “Stage Fright“. There is a lot of gore and the effects are pretty effective. The kills range from basic stabbings to people getting cut in half. But for the most part, the (admittedly impressive) kills are upstaged by the wild visuals. The camerawork is always creative, the lighting is flashy and the editing is very fluid. “Stage Fright” goes through some interesting moods. The first half plays out like it’s some sort of black comedy, with plenty of ironic moments and goofy jump scares. But during the second half, everything feels much more somber and grim. The majority of the cast is gone and all hope seems lost. This leads to the excellent ‘key scene’, which has to be one of the most suspenseful moments in slasher history. The imagery is simultaneously haunting and gorgeous. Yet I think my favorite aspect about “Stage Fright” is how it uses its setting. The introduction to the stage and killers costume is very silly and we don’t see how we can take it seriously. But by the conclusion, everything about them is menacing. The owl mask now sends shivers down my spine and that stage…the exaggerated lightning flashes, the sound of thunder and the feeling of an unseen menace prowling about made my skin crawl. It evolved from entertaining to downright frightening!

I’m always pleased when a director manages to successfully blend giallo and slasher elements. Together, they can make two stale genres seem fresh. For some reason, they always provide the weirdest examples of either genre too. I mean, “New York Ripper” has its killer speaking in a Donald Duck voice. I fear the minds who dream this stuff up! Enjoying “Stage Fright” comes down to whether or not you can accept it for its bizarre interpretation of reality. You have to embrace its eccentricities and overall weirdness. If you don’t think you can, I doubt you’ll get past the first 30 minutes. I have to admit that even I was struggling during the first 20 minutes, but I suppose that only makes “Stage Fright” an acquired taste. Beyond that, “Stage Fright” provides lots of kills, gore, suspense and eye candy. Me likey.

Overall: “Stage Fright” is not for everyone, but I’d say is worth watching if you appreciate slashers/gialli. It’s a…curious example of both genres, if anything.