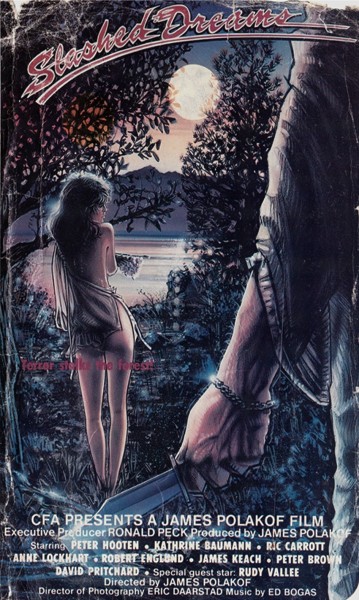 Plot: A couple goes into the mountains in order to visit a friend (Robert Englund), but…random stuff happens?

When “Slashed Dreams” was selected as my next re-review project, I let out a wail of despair…which only grew when I remembered that I owned a VHS copy. But when I look back upon my original review, I realized that the circumstances were different. Back then, I was still fuming because the case (see ‘poster’) marketed “Slashed Dreams” as a slasher, when it…well, wasn’t. As of 2015, I am aware of the back-story. A slice-of-life drama called “Sunburst” had its name changed into “Slashed Dreams” and was subsequently marketed as a slasher, thanks to Robert Englund striking gold with “A Nightmare on Elm Street“. So I decided to give it a second look…and turned it off after 20 minutes, before feeling the pains of guilt, which meant I had to finish it…admittedly while pressing the fast forward button. But do you know what? I don’t care. My original review was me grading it as a slasher, but “Slashed Dreams” should only be treated as a time capsule for the 70’s. It’s about a bunch of self important yuppies going through white people problems, who eventually realize that the universe does not work the way they think it does. This isn’t a good movie, being shoddily made, slow paced and awkwardly acted. But even if “Slashed Dreams” was much better, I probably wouldn’t have cared for it anyway as the genres it dabbles in do nothing for me…and I’m not big on movies which merely dabble in various genres to begin with. I thought “Slashed Dreams” was boring, but my anger is gone. If anything, I’m more frustrated with myself for wasting time on a movie I have no business watching or discussing. But here is my original review anyway and if you find it to be entertaining, I am happy for you.

How a movie like this got green lighted is beyond me. Imagine Seinfeld in the woods, but not funny. This movie is literally about nothing! How did this get pitched? “A couple goes into the woods seeking spiritual awareness“? Oh, the movie was made in 1975…clearly drugs are involved. Speaking of which, maybe if you do a little drugs while watching this movie, you may get a kick out of the cheesy, hippie inspired songs that play quite loudly in the background. They are so corny, but are the most entertaining thing in the film. Of course, that isn’t saying much. I’ll end this paragraph with my only real positive things about the film: Some of the philosophical ideas are okay, some of the actors deserve praise and there were some touching moments.

I have watched many slasher flicks, so I can accept a lack of plot in a movie. Not only does this crap make “Friday the 13th” look very plot-oriented, but it’s also VERY boring. Because little-to-nothing happens, we don’t find ourselves engaged in the events at all. A bear attacks, but not really. It just eats their food. Good! They deserve it! Yes, the shit does hit the fan at the end of the 2nd, act but I have already zoned out of the movie by then. Oh yeah, why was I comparing it to a slasher? The case advertises the movie as one, but it’s not. Originally, this was film called “Sunburst” (Definitely drug induced), but I think based on Robert Englund’s rising fame they tried passing it off as a slasher. I’m only reviewing this film for that reason.

What about the characters? Do we like them? Well, sorta. Personally, I was okay with the characters…however, since the movie doesn’t really go anywhere, I quickly became bored of them. I didn’t see the entire point of the first act, which has this subplot with a jealous boyfriend. The character is just dropped, despite being somewhat fleshed out- if a little inconsistent, and I didn’t get why that was necessary. Also, their reactions are beyond idiotic…especially during the ending scene. The dialogue often feels off as well, so it’s hard to really blame the actors when they can’t always sell it. Kathrine Baumann (Jenny) manages to give a focused performance. I bought her as a typical teen and then even more so when life gets hard on her. I can’t say the same for Peter Hooten (Robert), who gives a somewhat theatrical performance, feeling either wooden or over-the-top at times. James Keach (Levon) and David Pritchard (Danker) both cracked me up when they weren’t raping people. They had the funniest dialogue in the movie. Ric Carrott (Marshall) was on and off. When he was on, I was impressed. When he was off, it was as if he forgot how to act. Strange. A young Robert Englund (Mike) actually does great in his cameo. In fact, considering he has become typecast as “Freddy”, he is a convincing nice guy and I was impressed. The remainder of the supporting cast varied, some working and others not.

James Polakof must have been stoned during the filming because the pacing feels like it’s going in slow motion…and the fact he allowed those hippie songs in post production. The film isn’t engaging at all, so we don’t feel any tension. Finally, when something important happens near the end, the movie simply fails to bring a lot out of us. Sure, some of the scenery is nice, but I wouldn’t say the cinematography excels. “Friday the 13th” has an even more beautiful landscape, blowing this movie out of the water with that alone. So Polakof really doesn’t bring anything to the table, but wants to serve the script, which I am convinced never existed in the first place.

I suppose I better dedicate a paragraph to the philosophy and meanings to the film. Too be honest, I dug the background subtext. I actually think the asshole boyfriend was right in this regard. Mike moved to the mountains to escape reality (civilization). The leads wanted to understand and do the same thing, but the shit found them there. However, I didn’t like the rationalization of the rape scene. Basically, ones suffering gives them enlightenment and makes them better. I suppose I understand what they were aiming for, but it’s handled in a way that feels insensitive. Those rapists were helping her, according to this movie. It was quite irritating and laughable.

Violence: A very bland rape scene and some fighting near the end. Overall, it’s not violent though.

Nudity: Yeah, there is enough of a naked chick (some of a naked guy). Backsides and breasts mainly. Since this was otherwise a worthless movie, it was needed greatly.

Overall: “Slashed Dreams” is exciting if ‘nothing’ is entertaining to you. It’s not a slasher, despite trying to con you into thinking it’s one. But I guess I can’t blame the distributors for the deception as otherwise, no one would bother watching their piece of shit movie in the first place.