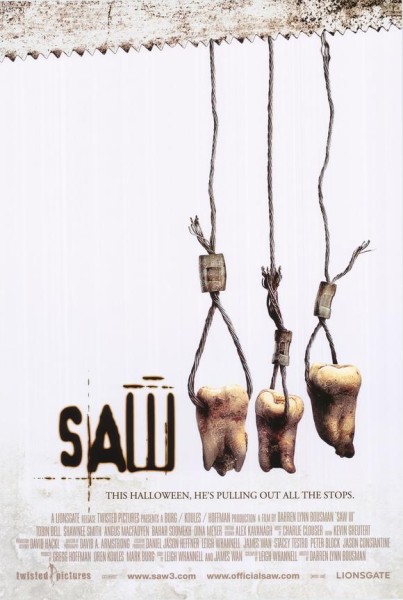 Plot: Doctor Lynn (Bahar Soomekh), a depressed woman who has lost her will to live, finds herself in one of Jigsaw’s (Tobin Bell) games- where she must keep him alive until a troubled Father named Jeff (Angus Macfadyen) completes a game of his own.

When I reviewed “Saw 2”, I claimed that “Saw 3” wasn’t only superior, but was also the best sequel of the franchise. While I still believe in my bold statement, I am a little sad to say that it didn’t hold up as well as I thought it would. I’m not implying that “Saw 3” is bad, or even on the same level of mediocrity that the followups would find themselves trapped in. It’s just not as good as I remembered it. There are a lot of flaws and this was the first entry where if you weren’t familiar with its predecessors, you wouldn’t have any idea what’s going on. Granted, I’d have no clue why you would watch this if you haven’t seen the first two films and the series would only further alienate the uninitiated in subsequent films. “Saw 3” works better as a continuation or even a conclusion to “Saw” and “Saw 2” than as its own entity, even though its predecessors succeeded as individual movies. But for all its flaws, “Saw 3” attempts to satisfy its target audience on more levels than just bloodshed- even though there is plenty of that as well. This would be the last entry in the franchise where I could see inspiration within the core story, whereas subsequent films were merely ‘competent made’ cash grabs.

The first act of “Saw 3” is VERY awkward. It opens up with our previous protagonist, Detective Matthews (Donnie Wahlberg), in the same situation we last saw him in. Okay, cool, so the movie is about Matthews as he continues to feud with Jigsaw. Wait, no? It cuts away to Detective Kerry (Dina Meyer), a re-occurring character from the previous two ‘Saw’ films. So is it about her? Will the SWAT guy get a bigger role? What is up with Hoffman (Costas Mandylor) and why does he seem suspicious? This could be a cool story, WAIT. You just killed Kerry and the other two never show up again? That was kind of lame. Okay, now it’s focusing on Dr. Lynn (Bahar Soomekh) and her interactions with our two lovable serial killers. Now it’s focusing on Jeff (Angus Macfadyen)…Jesus, so much is going on! The way it transitions from story to story is choppy, implying that either some of these subplots didn’t appear in the original script OR they were cut down in post production. The way Kerry is handled is a major slap to the face to us fans and I don’t like what they did with Detective Matthews. He does ‘return’ in a way later on, but his fate is so vague that it was frustrating. Originally there was a concrete conclusion to the character, which I thought would’ve been excellent. It tied in with another characters development, but instead it’s left up in the air and his story is concluded in AN EVEN WORSE WAY during “Saw 4”. Actually, that’s an overarching issue in general. There is a lot of stuff here that doesn’t add to the story of “Saw 3“, but is merely designed to set up future films. I’m usually fine with sequel bait, but these ‘additions’ occasionally get in the way of the good stuff. We’ll come back to that point in a bit.

Shockingly, the core story was very compelling. This would be the last “Saw” flick where I would root for the characters, WANTING them to triumph over their challenges- whereas in later films characters would merely be blood filled props whom no one cared for because we all knew they were toast. Having a fallen Doctor try to keep Jigsaw alive was a fairly creative touch and the situations Jeff would find himself in were moving. I was invested in their dilemmas and they were developing characters, even if sometimes that development isn’t always a good thing. Same with Amanda (Shawnee Smith), who does have her own character arc despite being a more menacing villain than Jigsaw. Yet it’s still Jigsaw who steals the show. While he’s not as prominent as he was in “Saw 2”, we do get glimpses into his past. Even though this was all very interesting, I did feel there were some missed opportunities. In my opinion, everything involving Kerry and the Police force should’ve been removed and left for “Saw 4” (which already focuses more on those guys). Then more time should’ve been spent on Jeff, who makes a baffling decision near the ending that didn’t fit with the rest of his development. I understand why the filmmakers chose to do that, but I didn’t understand why the character did it. More time should’ve been spent on foreshadowing that decision. Luckily, “Saw 3” quickly redeemed itself by having one of the most haunting endings of the franchise. Only the original left a bigger impact.

I also thought the traps were interesting because they weren’t conventionally violent. Well, let me take that back. There is still quite a bit of gore, with some sequences standing out as among the nastiest within the franchise. But the traps themselves are more psychological than anything. The protagonist must hurt himself to rescue those whom he hates, which gives each of the ‘trap’ sequences an edge as you don’t really know what he’s going to do. While there is a healthy amount of on-screen blood, the kills are memorable because you feel the characters’ pain and fear. Each trap comes with its own kind of atmosphere. When a character is slowly freezing to death, I could practically feel the cold. When a character is drowning in rotted meat, I felt like I could smell it. When a character is placed within a…let’s just say ‘twisting’ machine, I really cringed. These traps are certainly gruesome, but they don’t just provide disgusting death sequences. They put the viewer in the ringer with the victim, making them that much harder to endure. The director, who had previously helmed “Saw II“, has improved when it came to delivering suspense, tension and atmosphere. The spooky lighting, shadowy cinematography and grim locations made every event within the film seem creepy and menacing- even when something mundane is happening. I wouldn’t call “Saw 3” scary, but it is one of the more frightening entries within the franchise. Darren Lynn Bousman would go on to direct “Saw 4” before fading into obscurity. He can be found within the realm of direct-to-DVD cinema and his movies are usually considered to be okay, but “Saw 3” seems to have been the high point of his career.

“Saw 3” was the victim of executive meddling and that definitely hurt the quality of the picture. The narrative wobbles drunkenly at first, struggling to steady itself on its feet. Too much is going on, some subplots needed to be resolved and others were resolved poorly. But it did manage to entertain me, make me cringe and grimace at the victims pain and keep me on edge. Shockingly, I made an attachment to the characters and found myself rooting for them to win. Considering “Saw 4” and up would merely be about enjoying the gore that the traps bring, that says something about the superiority of “Saw 3”. If you didn’t like its predecessors though, you probably won’t care for this. But if you gave up after “Saw 2“, maybe you should give “Saw 3” a try. It’s not perfect, but it is a pretty good sequel.

Nudity: There is a naked chick, but props to the filmmakers for making the scene unsettling despite being explicit in the nudity department. That’s not easy to pull off.

Overall: “Saw 3” is the best sequel of its franchise, although it’s not as good as I remembered. When I first saw it in theaters, I thought it was great, but subsequent viewings have only made the flaws more visible. Still, I think it is a good splatter flick.