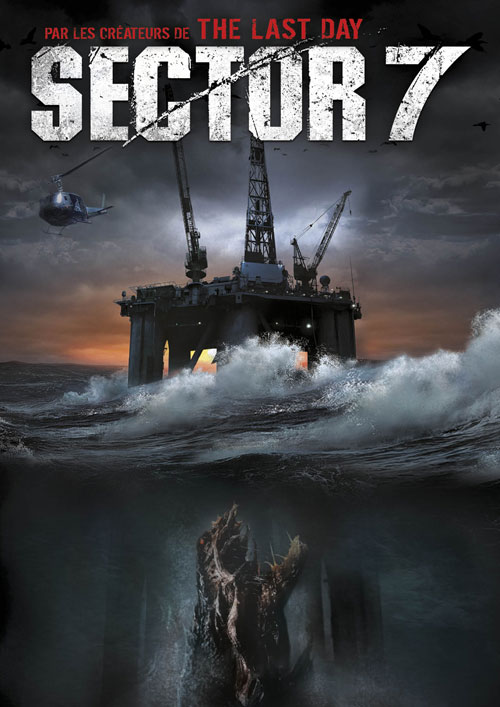 Plot: An oil drilling crew find themselves stranded on their oil rig, while being hunted by a bloodthirsty monster.

Something about “Sector 7” didn’t feel right. Despite being universally panned by critics and fake-critics alike, I didn’t find “Sector 7” to be terribly awful. If I judged the direction, cinematography, visual effects, set designs, acting and writing individually, I’d probably call everything “acceptable”. Or at worst, below average. Yet there is no chemistry amongst these various aspects of film-making. The use of CGI doesn’t work well with these moody locations and the director doesn’t really seem to be directing the actors. The cast seems to be treating the script as a joke, so they deliver hammy and melodramatic performances, which would only feel at home with “The Three Stooges”. It’s like all the pieces of “Sector 7” are at war with each-other.

Let’s begin with the script. At first glance, I found it to be harmlessly mediocre. The characters are all thinly written, border-lining on stereotypes, but that is fairly common within these types of films. But as the plot develops, it seems like the screenwriter kept forgetting key elements. Maybe I started to doze off and overlooked some plot points, but what happened to the Father in the opening scene? I had a theory, but as we learn what the monster is, I had to dismiss that. Why does the monster goo resemble semen? Was the doctor a moron? Because I’d presume a trained professional would know the difference between semen and another kind of substance. It’s possible they were going the phallic route that “Alien” explored (and what “Alien Vs Ninja” exploited to hilarious levels). But after that line, there’s nothing subliminal about the monster or what it does (the penetrating tentacle never struck me as phallic, oddly). Instead, it just seems to have been used as a red herring. Also, did they ever reveal what happened to the bodies? They make a big deal out of the monster being a corpse snatcher, but unless I missed something, there was never an answer for that. Speaking of the monster, was it just me or did the thing seem way too intelligent? It always seems to know where everybody is and has that nasty tendency to appear whereever the plot calls for it. It also apparently kills for the sake of killing, because half of the time it just slays someone and leaves. With that said, I could easily overlook these flaws as they tend to accompany harmlessly mediocre monster scripts. Now we’re going to discuss the real issues that plague the movie.

The first act of “Sector 7” is probably the hardest to swallow, because it focuses on the annoying comical antics of the characters. Everybody is loud and noisy, bickering excessively. Even our hot heroine isn’t especially endearing, because 90% of what comes out of her mouth is bitching (although the kissing scene was admittedly cute). The CGI is rather troublesome because it’s unnecessary and no, I am not bitching about the monster. For some reason, they’ll occasionally make the backgrounds CGI and they also have a CGI Motorcycle race. I’m cool with this in a movie like “300”, but “Sector 7” isn’t trying to be stylish about it. It seems to want to make it appear ‘realistic’- despite the obvious digitalization of the scenes- which suggests they were just cutting corners in costs. It makes the final result seem awkward. The tone is very lighthearted too and this eventually sets up another major problem.

I have to confess that I was entertained during the first half of the second act. Every once in awhile, there would be an intense or exciting sequence. I also happened to like the monster design. But the goofball comedy doesn’t go away and it’s never as funny as the attempts at drama. Whenever somebody dies and characters break down in tears, I had to suppress a snicker. They really go all out in trying to convey sadness, but it’s so over-the-top that it’s difficult to take seriously. But I don’t believe that was the intent, because the atmosphere is more grim. It’s another example of the lack of chemistry between the director and his actors. They apparently all had different ideas as to what the movie was. While the monster does generally look cool, it never feels like it’s really interacting with the characters. The cast always seems to be looking at nothing, while the monster or another special effect is just added in post. I remember feeling the same way about “Percy Jackson and the Olympians”, where the actors had no idea what they were supposed to be responding too, because they were looking at a green-screen. “Sector 7” is guilty of the same problem, probably due to the lack of direction.

But I was toying with giving the movie a 2/4 stars until the final act. While I was invested somewhat during the middle block, that’s because the movie was playing all of its cards early on. Eventually it runs out of steam and starts becoming redundant. Characters will appear to die, but then return, revealing that they survived the attack. Then they die again. This goes on more than once and there is no reason for it, other than to pad the running time. The monster is the worst offender because the movie keeps climaxing with the apparent death of the beast, only for it to return AGAIN and its injuries only make the CGI more obvious. What’s bizarre is that the finale is non-stop action, having a few inspired set pieces in the process. But how many times do I need to see that “monster nearly eats girl” shot in slow motion?. It got so boring!

I’m actually not very familiar with Korean cinema, although I’ve mostly liked what I’ve seen. “I Saw the Devil” was one of my favorite movies of its year, “Shiri” was a pretty inspired actioner and I adored “The Host”. In fact, “Sector 7” seems to be trying to do the same thing as the latter. “The Host” genre-bended quite a bit, being light hearted one scene and tragic the next. It aimed to be funny, heart warming, sad, intense and actually had a point. The difference between the two is that “The Host” was carefully written and directed, making sure that the drama and comedy never betrayed each-other. It magnified the experience, while also having an amazing score and GOOD CGI. “Sector 7” answers the question of ‘what if “The Host” sucked?’. It fails in all of its goals and was just kind of dull. It’s a shame, because I do usually enjoy monster movies that take place in isolated locations. But even “Dragon Wars” was more entertaining!

P.S: By the way, I’m pretty sure the “10 minutes before the place explodes” countdown went on much longer than 10 minutes.

Violence: Rated R. Nothing too graphic, but a few scenes are bloody.

Overall: “Sector 7” isn’t unwatchable, but it’s not really worth watching either.