(Written and Directed by Quentin Dupieux) 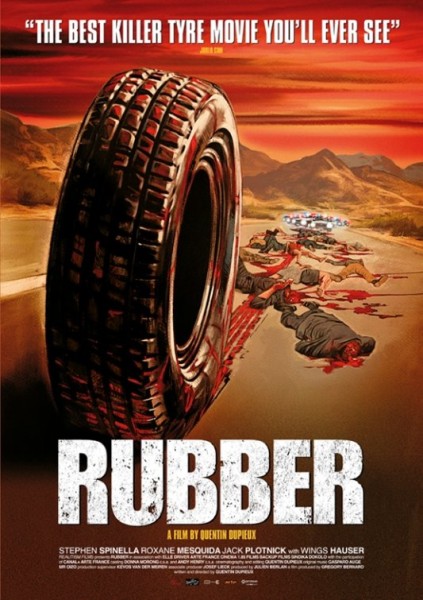 Plot: A group of spectators are gathered in the desert to watch the exploits of a living tire. The tire discovers it has psychic powers and starts…rolling around…and then occasionally causing peoples heads to explode.

What? You say “Rubber” is a movie about a killer tire? I’m sold. A killer tire who causes heads to explode using psychic powers? Name your price and I shall pay it! Those who follow my reviews should know that I am a sucker for bizarre premises. When I announce the existence of “Alice in Murderland”, I smile broadly while my friends and family shake their heads in shame. But the truth is, I’ve been burned way too many times whenever a wild idea like this hooks me in. I used to tell everyone I know about “The Gingerdead Man” (killer gingerbread man!) and “ThanksKilling” (killer turkey!) until I actually sat down and watched them. These films have the tendency to suck the enjoyment out of themselves, so I’ve become wary about watching them. “Sharknado” (killer sharks in a tornado!) has become my latest fad, but I’m reluctant to actually view it because I know it will bore and annoy me. Perhaps some movies should be left to the imagination…“Rubber” is an odd case because even though it has a premise designed to be a Scyfy original, it’s nothing like the above entries. In its own way, it’s actually not bad. But also in its own way, it’s unwatchable. You see, “Rubber” is not horror…it’s arthouse…Ew.

“Rubber” is really, really, really, REALLY, weird. Let me try to describe what goes on in this movie, so you can get a taste of how…weird it really is. It opens with a Police Officer (Stephen Spinella) talking to the camera (revealed to be a group of spectators) about how things happen in films for ‘no reason’. He leaves and the group begins to watch something using binoculars. Some dialogue suggests they’re watching a movie from a distance…for some reason…other lines imply they are watching the actual events. All we know is they are seeing a tire roll around and use psychic powers to blow shit up. We are supposed to presume that the spectators are avatars for the audience, watching the story unfold. Eventually, characters whom apparently are avatars for the filmmakers start to try to kill the spectators off, so the story will end. Everyone puts their weight on the fourth wall that eventually they knock it over. “Rubber” is weird and what I just described is merely a taste of its weirdness. 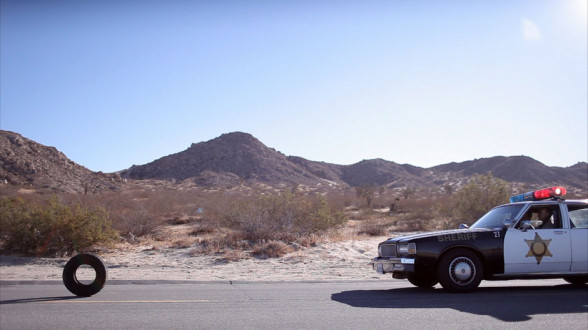 The only problem I have with “Rubber” is that it’s boring…which is probably the one problem no movie wants to have. I swear that the majority of the screen-time is dedicated to the tire rolling around, while (admittedly good) music plays in the background. The trailer marketed this as a Grindhouse-esque, intentionally so bad it’s good, B-grade horror flick. But it’s not horror. This is an arthouse feature that juggles black comedy and schlocky horror rather evenly, but dips it in a bucket of artsy fartsy pretenses. What’s maddening about the agonizingly slow pace is that the film is only 82 minutes long and it seems to know its boring. Occasionally the spectators will even ask to speed things up. The director of “Rubber”, Quentin Dupieux, might be a genius, but he’s a genius who’s trolling his audience. I really don’t like being trolled.

I have to concede though that it does certain things very well. Much like the dog from “The Thing”, “Rubber” deserves credit for delivering a spectacular performance from the titular tire…and wow, words cannot describe how stupid I feel for saying those words…The filmmakers give it…body language? You do feel what it’s feeling and that really says a lot. The score is pretty effective and sometimes, “Rubber” is fairly moody. The kills might get redundant after awhile, but the gore effects are superb. I also thought the acting usually was impressive, although a few of them felt wooden. I liked how everyone played it straight, treating “Rubber” like it was a serious film. I especially love how the “He’s been reincarnated as a tricycle” line is delivered without any hints of cheese or winking at the camera. Now that is how parody should be done.

In many ways, “Rubber” reminds me of “Funny Games”. Both films are unnecessarily slow paced and both films have an obnoxious, snobbish aura about them. They reek of self-importance and unfortunately for both, neither are as smart as they think they are. I think “Rubber” would’ve worked better if a character didn’t flat out acknowledge that they were characters in a movie. The whole scene where the Police Officer is trying to convince his co-workers that they are actors with props, not real cops with guns, felt like the film was drowning in its own feces which it was confusing for liquid gold. That’s the laziest form of meta. Unlike “Funny Games” though, “Rubber” at least never loses its strange edge. Even though I didn’t like the movie, it consistently threw me off, whereas “Funny Games” (and its shitty remake) just kept pointing out how conventional it was, which apparently made it unconventional for many viewers. “Rubber” is legitimately unconventional, if anything.

I disliked “Rubber”, but only because I’m not a fan of what it was aiming to be. While I’ve seen many good artsy films before (“8 ½”, “400 Blows” and more if you doubted my credibility), I don’t like it when they’re combined with horror. “Death Smiles Upon a Murderer”, “Death Bed: The Bed that Eats” and now “Rubber” all bored me. It is the opposite of its Scyfy original counterparts. Flicks like “Piranhaconda” usually suck because ineptness. They’re just awful movies. “Rubber” might be well made, but it thinks it’s better than it really is and I’m just not a big fan of arthouse horror. “Eraserhead” (this one is alright), “Tetsuo, the Iron Man”, “Izo” and many others aren’t objectively bad, but they aren’t my cup of tea. I’ll stick with movies like “Dead Sushi” (zombie sushi!), thank you very much.

Nudity: Some, when the tire watches a girl showering.

Overall: If you like arthouse flicks and the idea of killer tires, then maybe “Rubber” is for you. It wasn’t for me.