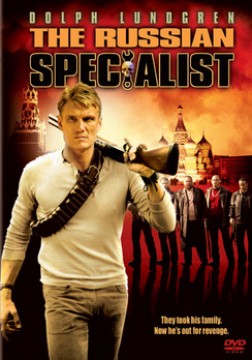 Plot: Nikolai (Dolph Lundgren) is a Russian Special Opts turned drug peddler turned mechanic whose family is brutally butchered during a shootout between gangsters. He tracks down the killers and apparently murders them all, but it turns out Sasha (Ivan Petrushinov)- his primary target- survived. When Sasha kidnaps the daughter (Olivia Lee) of a rich woman, Nikolai reluctantly takes the job to get her back. But it won’t be easy! Also known as “The Mechanik“.

I’m pretty sure that every direct-to-DVD, Dolph Lundgren vehicle I’ve covered has earned a 2/4 star rating. Does that mean that Dolph has the tendency to make mediocre movies? Not necessarily. Cut out the annoying love interest and “Command Performance” would’ve been much easier to enjoy. It seems to me that Dolph’s films suffer from their attempts at evoking emotion from us. He forces in subplots with romance, familial bonding or drama. He needs to stick to what he’s best at: beating the unholy hell out of people. “The Russian Specialist” is your typical Lundgren movie. It strikes a balance of good, bad and mediocre.

What drives me insane about Dolph’s films is how unnecessarily complicated he makes them. There is way too much back-story and the first half of the film is highly clunky. We learn too much unnecessary information about Nikolai (we get it, he’s badass!). The scenes with his family are so mawkish that we know they stand no chance of surviving. Then he constantly keeps FLASHING BACK to their deaths. It gets old so fast. We get it Dolph, you want to be dramatic. Well guess what? Drama works best when it’s subtle. Bashing us over the head with this is not going to make us care. Then they over-complicate the plot with all these needless additions and subplots involving the supporting cast. It’s pretty redundant in general, with plenty of “you’re out of control” comments to make a point that Dolph is edgy. The focus is unclear and the direction is awkward. Maybe it’s not the direction, but the editing is choppy. I swear to God that every scene ends with a fade out. It’s even worse in that it sometimes seems to fade out in the same sequence, breaking up the flow of the action. Lundgren also makes sure to throw in as many directing cliches as possible, utilizing every familiar shot in the book, including that hazy cinematography which every direct-to-DVD movie seems to think is cool. I became annoyed with this movie, not caring about the average action sequences. It was just sloppy.

But it got better.

Strangely, the film ultimately began to smooth itself out. The plot just becomes about a group of guys escorting their charge to the border. There isn’t much action during the second half, but the atmosphere is a little more striking thanks to the washed out colors, the nice looking wide shots and the haunting score. When the action does happen again near the end, it’s rather suspenseful and reminded me of “Red Dead Redemption” (multi-player version) for some reason. I won’t say the second half is good, but it becomes more engaging. Sure, the choppy editing is still there, but Dolph makes up for it with some winning shots (the reflection bit at the end) and wonderfully chunky violence. Some of the kills are hardcore! One thing that made me laugh was that Dolph seems to be toying with a love story, but decided against it. It’s as if he knew how absurd it would be, although I wish they slashed all traces of it out of the film in general. 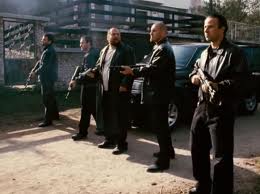 I think the main problem with Lundgren’s movies is that he’s trying to be Jean Claude Van Damme. He wants to be taken seriously as an actor, so makes sure there are plenty of windows open for him to show off his dramatic chops. Unfortunately, he relies on cliches to do this and he’s just not that good of an actor. Yet the movie begs for me to care. However, while “The Russian Specialist” is guilty of all of this, it also has some good moments too. The action isn’t bad, the supporting cast is stellar and some of the direction is actually pretty inspired. I do want to stress that I like Dolph Lundgren. He’s imposing, badass and his acting skills are acceptable within their limitations. I wouldn’t call “The Russian Specialist” a good movie, but at least it’s not a Steven Seagal movie.

Nudity: Some, although the context isn’t always pleasant. Rape is an issue, although it’s more implied.

Overall: “The Russian Specialist” is worth watching if you want to see a Dolph Lundgren movie. If not, don’t bother.