(Written and Directed by Su-chang Kong) 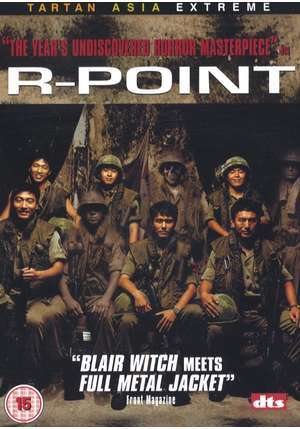 Plot: Set during the Vietnam War, a South Korean base receives a transmission from a platoon everyone thought was lost. A troubled Lieutenant Choi (Woo-seong Kam) is ordered to take a handful of men to “R-Point”, where the transmission had come from. But then weird things start to happen and the soldiers begin to realize that they are being hunted by something. Is their unseen enemy the Viet Cong? Or is it something far worse?

I’ve said it once and I’ll probably say it at least four more times, but I want to see more horror movies take place during wartime. Perhaps I should feel guilty for these feelings, as war is horrific enough without ghosts troubling the poor soldiers. Or maybe I should just feel stupid because War movies tend to be epic, big budgeted affairs while the horror genre is on the opposite side of the spectrum. But I love them and “R-Point” stood out even more because it was set during the Vietnam conflict. While war sucks in general, there was always something more visceral about the Vietnam War. Maybe it wasn’t the war itself, but the movies which presented it. Most World War 2 movies- as long as the Holocaust wasn’t the focus- tended to be propaganda. They didn’t glorify the violence, but they glamorized the soldiers. Vietnam movies tended to be grittier and more cynical. So if anything, that provided more opportunities for the horror genre, because what other group of films is more nihilistic? “R-Point” thankfully delivered everything that I wanted out of it. Unfortunately, it also gave me everything that I didn’t want.

The first thing you have to respect- or at least accept- about “R-Point” is that it is very ambiguous. It’s shrouded in so much mystery that all of the provided answers only made things more mysterious. You will often be wondering if you’re missing something and when the end credits start to roll, you’re bound to be thinking “huh?”. I suppose one can make the argument that this is modern day surrealism. While there is a narrative, it plays out in a way that resembles a nightmare. Luckily, this provides many freaky and chilling moments. I’m thrilled to say that there are a lot of standout scary sequences, my favorite being when the Lieutenant stumbles upon a graveyard. It’s unnerving as it is, but the lightning strikes (which provides the light) adds a whole new level of terror to the scene. Or what about the scene when they stumble upon a bunch of bodies in the river? Brrrr. How dare I forget the troops arriving at the dilapidated mansion? The location alone is creepy, but the director is sure to milk it for all it’s worth. I’m just getting to the tip of the iceberg too. There are so many horrific parts that are still fresh in my mind, but discussing them would take forever.

My complaints are a little predictable. The most common criticism directed at “R-Point” is the lack of characterization amongst the cast. This is one of those movies where you almost wish the characters were just archetypes. Most of them are indistinguishable, with only a few standing out amongst the crowd. This does, ironically, occasionally benefit the movie. At the risk of exposing more scenes, I really loved the bit where a lost soldier finds across his group, only to realize they aren’t his comrades. They slowly walk through the brush, ignoring him, before ducking and vanishing. It’s a spooky little sequence, but the best part of it is the aftermath. The soldier is screaming and panicking, but it’s the ambiance and sense of isolation that crawls under our skin. There’s also a part where it turns out one of their members might be a ghost and they are all trying to remember when the person actually joined the group. While they pieced that together, I was biting my nails and shivering. I love the idea and the execution was even better. Did the writer/director intentionally make the characterizations thin in order to pull this off? Maybe, but I should at least be able to tell who is who. “The Thing” revealed little about its cast, but each of the characters became memorable through their actions. To be fair though, it doesn’t help that everyone is dressed alike. 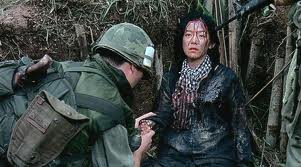 But I can forgive that, as at least it provided a cool pay-off. What I can’t forgive is how obnoxious everyone is. If “Deathwatch” tested my patience with how annoying, unprofessional and stupid everyone could be, “R-Point” crosses that line way too many times. Everyone is constantly bickering and calling each-other ‘asshole’ in every sentence. You eventually start to wonder if they greet each-other by saying “Hi, asshole. How are you doing?” and the response would be “Good, asshole. How about you?“. There’s also a lot of “hey, let’s split up” decisions that might be understandable at first, but eventually becomes too farfetched. Characters always seem to be running away from the group, making sure they’re alone so they can die. While encountering the paranormal would certainly be disorient everyone, they’re like this even when they think the enemy is human. This is the only complaint that doesn’t have an upside.

If you don’t share my enthusiasm for war-horror crossovers, I don’t think you will share my love for “R-Point“. Even as someone within the target audience, I was often bothered by the flaws. The structure can be summed up like this: There is a scary sequence, complete with superb photography, a spooky location, an unsettling score and a creeping sense of dread. The threat of danger is always present and yes, the movie got to me. But every good scene is followed by a crap scene of people talking, getting on my nerves and doing something moronic. Every spine tingling moment was matched with a migraine! You also might find yourself confused, but I mostly dug its refusal to clarify anything. So you’re either going to embrace the good or loathe the bad and while the bad might’ve irked me, the good legitimately impressed me. Maybe I’m biased, but I liked this movie.

Violence: Rated R. It has some moments, but generally promotes psychological terror.

Nudity: None, but there is some sex early on and a fair amount of dirty language.

Overall: “R-Point” is at least worth a look if you like these kinds of ghost stories. The setting alone makes it appealing for me.